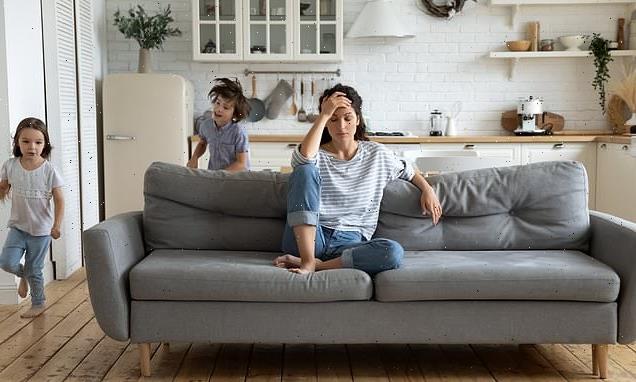 Should parenthood come with a warning? Women debate if girls are ‘oversold’ the rewards of being a mother – as one admit it’s the ‘worst’ thing that’s happened to her ‘physical, mental and financial wellbeing’

A woman has provoked a debate after asking if ‘we are oversold the idea of motherhood as young women’.

Writing on the British parenting forum Mumsnet, the woman explained that although she loves her two children, she’s not sure that the ‘rewards’ of having children that she was always told about are necessarily true.

She said she has been ‘thinking deeply’ about  her feelings on motherhood and wonders ‘it is all worth it?’.

Responses to the post were divided as many admitted ‘it’s a pretty s*** job’ and ‘unbelievably challenging’ while others revealed motherhood is the ‘best thing’ they ever done. 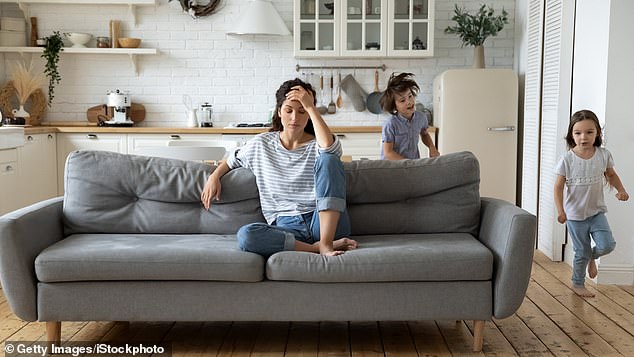 The mother said she loves her loves her children but she also loves her partner  ‘deeply’ and she ‘could not imagine life without him’ but admitted it’s a ‘different type of love.’

She wrote: ‘I have possibly stayed up too late and drunk too much red wine, but I have been thinking deeply tonight about what I really think about being a mother.

‘I love my two children, no questions there about that. But I do wonder if we are oversold the idea of motherhood as girls and young women?’

One person replied saying: It’s a pretty s*** job. My kids are fab though’ which prompted the poster to reply ‘My kids are great too. I have been really lucky with them. 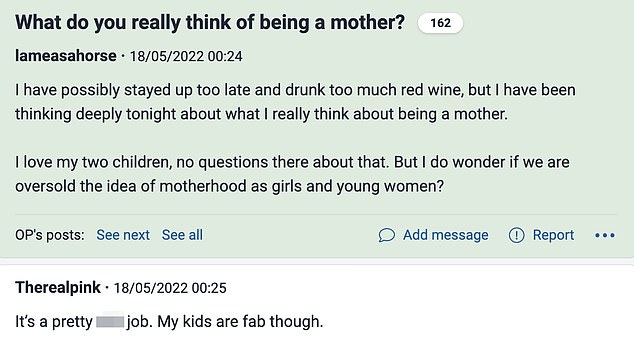 Writing on the British parenting forum Mumsnet, the woman explained that although she loves her two children she was told about ‘the rewards’ and she’s not sure they are true

One person replied saying it’s a pretty s*** job. My kids are fab though which prompted the poster to reply saying her kids are great too and she is ‘really lucky with them.’

‘But I was told so much stuff before I had my children about the rewards, the greatest love of all, how it is all worth it, how it makes you see the deeper meaning in your life…

‘And I am not sure that is true. I love my kids deeply, but I also love my partner deeply and could not imagine life without him. It is obviously a different kind of love though.’

A stream of responses to the thread agreed that being a mother can be overwhelming, with one mum admitting it is ‘a bit like setting fire to your old life and watching it burn.’

She said: ‘I adore my daughter and enjoy being a mother (particularly right now – the preteen years are actually rather nice). 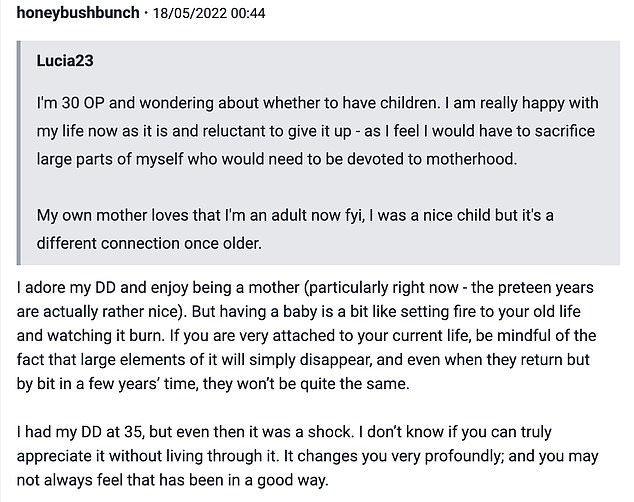 A stream of responses to the thread agreed that being a mother can be overwhelming, with one mum admitting it is ‘a bit like setting fire to your old life and watching it burn’

‘But having a baby is a bit like setting fire to your old life and watching it burn.

‘If you are very attached to your current life, be mindful of the fact that large elements of it will simply disappear, and even when they return but by bit in a few years’ time, they won’t be quite the same.

‘I had my daughter at 35, but even then it was a shock. I don’t know if you can truly appreciate it without living through it. It changes you very profoundly; and you may not always feel that has been in a good way.’ 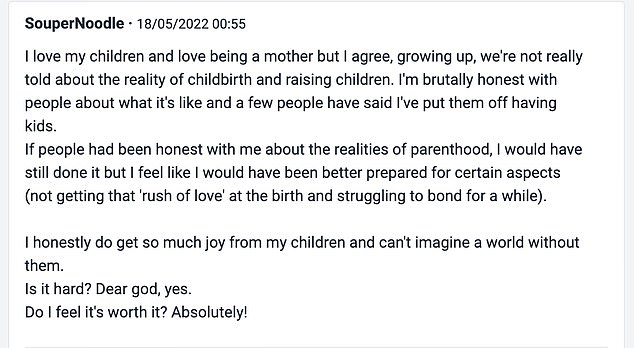 Another mother even admitted she put her friends off having children after being ‘brutally honest’ with them about motherhood.

She said: ‘I love my children and love being a mother but I agree, growing up, we’re not really told about the reality of childbirth and raising children.

‘I’m brutally honest with people about what it’s like and a few people have said I’ve put them off having kids.

‘If people had been honest with me about the realities of parenthood, I would have still done it but I feel like I would have been better prepared for certain aspects (not getting that ‘rush of love’ at the birth and struggling to bond for a while).

Some women gave  a very honest view of motherhood and said that althought they love their children it’s had a huge impact on their finances, relationships and mental health

A mother-of-three said that none of her children were planned and that she very nearly died in childbirth.

‘Do I love my kids, of course I do, but it isn’t what I planned or particularly wanted however I was lucky, we could afford a nanny and I went back to work as soon as I was able,’ she said.

‘I’m not sure that motherhood is oversold but I don’t think it’s the be-all and end-all of everything. There is more to life than having kids.’

Another added: ‘Almost 30 years of it now and I’m still not done as it never stops, even when they’re grown up. I lost a lot of my sense of self, my old hobbies and old friends along the way.’

But other women also admitted having children was the ‘best thing I’ve ever done.’

Including one mum who waited until she was 45 to have kids and wish could have more.

She revealed: ‘I wasn’t oversold on it. My mother spent 30 years telling me it was a thankless task and a waste of her life. (Despite doing it five times!) 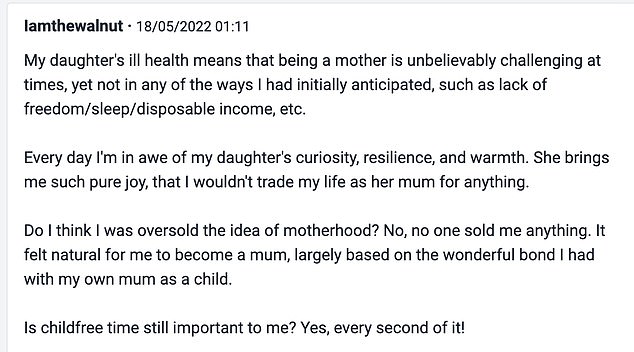 ‘I finally had my only child at 45 and love it. The best thing ever for me and the ultimate in creativity, turning out a kind, happy, tolerant human being.

While another mother said: ‘ No I don’t agree. I think it’s the best thing I’ve ever done.

‘It helps for me that I was in my late 30s/early 40s when I had dds. I had already done loads of traveling and career stuff so wasn’t giving anything up.

And another women agreed wishing she had more kids after she was told it ‘would ruin her life.’