The fox can be a pretty sneaky sort of animal. When Jo Lennan was writing the short stories that comprise her first collection, one seemed to keep popping up on the page when she didn’t really expect it. As she became more aware of these vulpine intrusions she seized on the creature to become a linking motif for In the Time of Foxes.

Now that book has been shortlisted for the fiction prize in the Prime Minister’s Literary Awards. Others on the shortlist are: K.M. Kruimink (A Treacherous Country), this year’s Miles Franklin winner, Amanda Lohrey (The Labyrinth), Andrew Pippos (Lucky’s), and Stella Prize winner Evie Wyld (The Bass Rock). The annual awards, which were established by then prime minister Kevin Rudd in 2008, have six categories: fiction, non-fiction, Australian history, poetry, children’s literature, and young-adult literature. Winners each receive $80,000 and shortlisted writers $5000.

Lennan’s stories are set around the globe, in Sydney, London, Osaka, Spain and Hong Kong. Characters squabble, make up, make discoveries about families, the past and each other. The final story in the book makes use of an encounter she had with a fox on Mt Kosciuszko when she was a child. 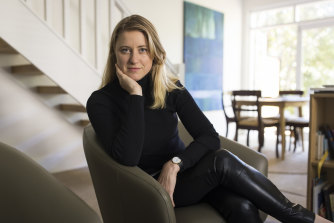 In the Time of Foxes writer Jo Lennon.Credit:Anna Kucera

“I’m a bit suspicious of themes,” Lennan said, “but the fox was interesting to me as this urban, mobile somewhat colonising creature, a shape-shifter, a trickster, a clever creature and not altogether trustworthy. All of these different qualities, I felt, made it a kind of useful proxy for some of the stories that I was telling in the book.”

When she was in London, she was struck by the urban fox phenomenon – their numbers were diminishing in the country but increasing in the cities.

“I think that speaks to that quality of adaptation that foxes have. I think they’re a real parallel with humans as a species in terms of this relentless geographical spread; where we go, foxes follow because they’re really adept at making homes where we live.”

Lennan, who works as a lawyer for a charity addressing social disadvantage, said she was staggered to be on the shortlist for a book of short stories. “Everyone warns you that they’re a bit hopeless for sending out into the world. It all feels like exceptional good fortune.”

She has always written them but gave up for a while as she worked on a novel that had won an unpublished manuscript award. She said she was “deceived by middling success” and although people said nice things about it, she didn’t really get anywhere with the novel.

“Years later I thought I needed to try something else and went back to writing some stories but having by then upgraded my sense of what a story is or should be. I found that things just clicked, and I wrote the bulk of this collection in the space of about four months. The fox thing clicked and I just had fun.”

A shortlisting is really more icing on her cake. She was diagnosed with a rare cancer in 2015 she thought treatment had stopped. “But I had a recurrence circa 2017, which meant it was officially stage four. By that point, my odds were appalling.”

Doctors were unable to operate, so all she could do was have radiotherapy. “Anyway, it just kind of worked out so here I am now five years on, which is extremely good and extremely unlikely based on where I was in 2017. My oncologist regards me as a once-in-a-career patient because stage four with a rare cancer when you’re out of drugs to try is not where you want to be.”

And there was to be more good news. Last year, she gave birth to a baby girl. “She’s a bit of a bonus baby, really,” Lennan said.

The winners of the PM’s Literary Awards will be announced in early December.

Non-Fiction
Flight Lines: Across the Globe on a Journey with the Astonishing Ultramarathon Birds, Andrew
Darby
The Altar Boys, Suzanne Smith
The Details: On Love, Death and Reading, Tegan Bennett Daylight
The Stranger Artist: Life at the Edge of Kimberley Painting, Quentin Sprague
Truganini: Journey Through the Apocalypse, Cassandra Pybus