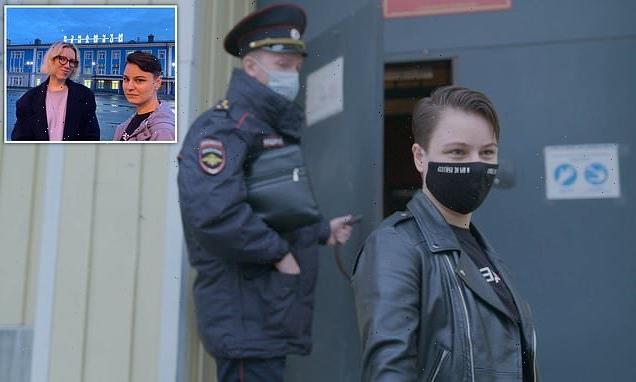 The women fighting Putin: Moment opposition politician is forced to isolate in a Russian Covid hospital despite not being ill as documentary follows defiant females who refuse to back down even if it means ‘losing everything’

A new ITV documentary is exploring the women who are fighting against Russian President Vladimir Putin’s administration.

Fearless: The Women Fighting Putin, which airs at 10.45pm tonight, follows Russian opposition politicians as they campaign and refuse to back down even if it means ‘losing everything’.

Violetta Grudina, 31, an ally of Kremlin critic Alexei Navalny, wanted to run for Murmansk City Council in April 2021 but shocking footage shows her being forced to isolate in a hospital’s Covid ward despite not having the virus.

Following several weeks of being detained, Violetta declares a hunger strike, and is released eight days later, but is eventually barred from standing.

She appears in the documentary alongside Lusya Stein, who belongs to the well-known Pussy Riot, an art-punk protest collective, and Irina Fatyanova, 32, an independent opposition candidate from St Petersburg. 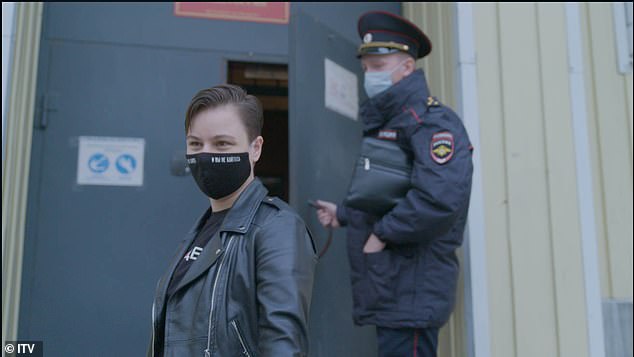 Violetta Grudina (left), 31, an ally of Kremlin critic Alexei Navalny, wanted to run for Murmansk City Council in April 2021 but shocking footage shows her being forced to isolate in a hospital’s Covid ward despite not having the virus 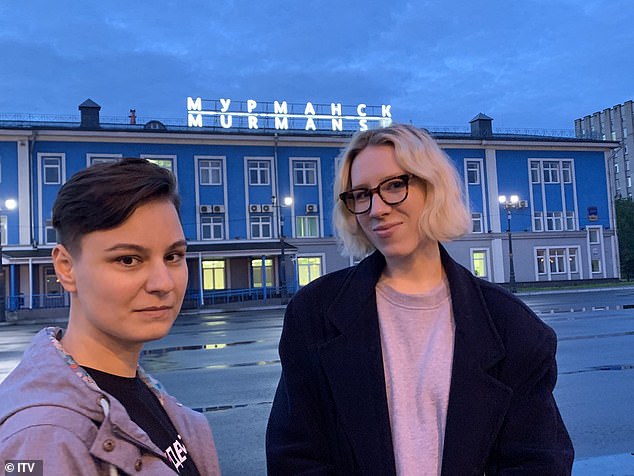 Following several weeks of being detained, Violetta (left) declares a hunger strike, and is released eight days later, but is eventually barred from standing

Five months ahead of Russia’s  parliamentary and regional elections in September, Navalny’s entire organisation is outlawed as extremist.

Violetta ran the Navalny headquarters in Murmansk, a port city in the northwest of Russia, and says: ‘This government tried to destroy me and all my colleagues across the country.

With Navalny’s organisation destroyed, only a few independent candidates remain – many of them women.

During filming, Violetta plans to run as an opposition candidate in the local elections – but the pandemic is being used to try to silence her as authorities force her into hospital to treat her for a virus she doesn’t have.

Violetta says: ‘Murmansk is a very, very quiet region and, unfortunately for the authorities, I am a catalyst for all protest sentiment. 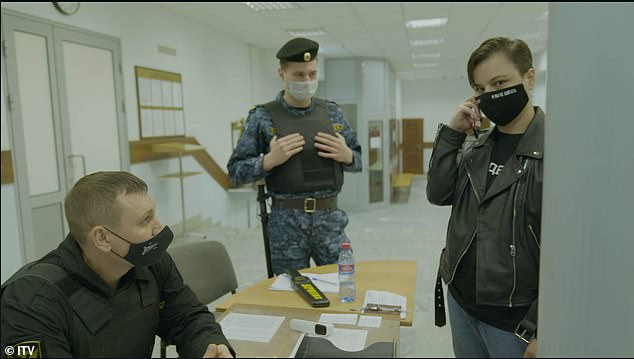 Violetta (right) appears in the documentary alongside Lusya Stein, who belongs to the well-known Pussy Riot, an art-punk protest collective, and Irina Fatyanova, 32, an independent opposition candidate from St Petersburg

‘That’s why all possible methods will be used to shut me up, to eliminate me in the elections. Because what headlines have appeared in local state media? (Violetta) Grudina is infecting people with Covid.

Violetta, who won’t be able to register as a candidate if she is locked in hospital, added: ‘Well, they f***** up here. People support me. Everybody understands everything very well.

‘Two plus two: I’m a politician, a criminal case. What else is there to think about in this country? I had a court decision that had to be executed immediately that required me to be taken by court order to a Covid hospital.

‘So I voluntarily went downstairs, without any hysterics or indignation,’ she explained, with footage showing her entering the vehicle which will take her to the ward.

‘Here is the carriage, the bailiffs. and I, a healthy person, am being taken to a Covid hospital. Good luck to you all,’ she says in a video taken on her phone. 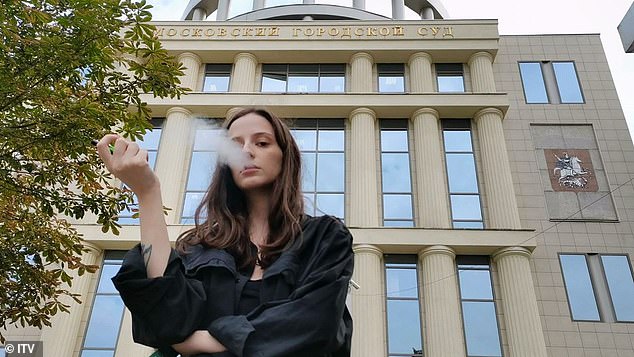 ‘Of course I had a choice, to run away and stuff like that. But they’d just saw my door off with a bolt cutter and drag me to the hospital by force. I’d rather walk in with my own feet.’

Violetta’s campaign manager Natasha Zamorskaya decides to pay a visit to the hospital where she’s being held.

Natasha stands at the bottom of the hospital, where she can see Violetta, who remains on a ward with patients suffering from pneumonia, though a window.

‘There’s no telling how long I’ll be here, of course,’ says Violetta, while Natasha suggests: ‘I think you’ll be there till the end.’

Violetta replies: ‘Judging by the mood, a very long time. In short, I’m in a hospital, but, as it turns out, a prison, a hospital prison. I have introduced a new term to Russian political life: medical prison. And it’s just real torture.’

Eventually Violetta declares a hunger strike; she is refusing to take any food and will only drink water.

Violetta says: ‘I wouldn’t wish hunger strike on my enemy. It’s a desperate move. There’s just no other way.. Your body is slowly and surely dying. It is agony, it is suffering.’

Eight days later she is suddenly released from hospital – but ten days before the elections and Violetta has already been barred from standing.

‘I’ve been thinking a lot about emigration, especially lately when I’ve been actively offered it,’ admits Violetta.

‘This is my homeland. I should not leave it just because somebody else wants me to, because they are pressuring me and want me to stop my political activity. Why should I leave here?

‘I don’t know, maybe Alexei (Navalny) and I love our country too much,’ she concludes.

Elsewhere, protester Lusya Stein says: ‘To be a politician in Russia, you have to be prepared to lose everything… And sacrifice your life.’

Irina Fatyanova, opposition candidate in St Petersburg, says: ‘When injustice happens, you have to fight for everyone, you have to tell the truth.’

Footage in the documentary shows one of her campaign posters slashed across her ‘face’.

In the September 2021 elections, Putin’s United Russia Party gained nearly half the votes.

Analysts estimate half of those were fraudulent, claims the documentary. All other parties were approved by the Kremlin. The Kremlin has said the elections were competitive and fair.

‘We approached the Russian Embassy for comment. There was no response,’ explained the programme.

Fearless: The Women Fighting Putin, a co-production by The Economist and Hardcash Productions is on ITV at 10.45pm tonight. 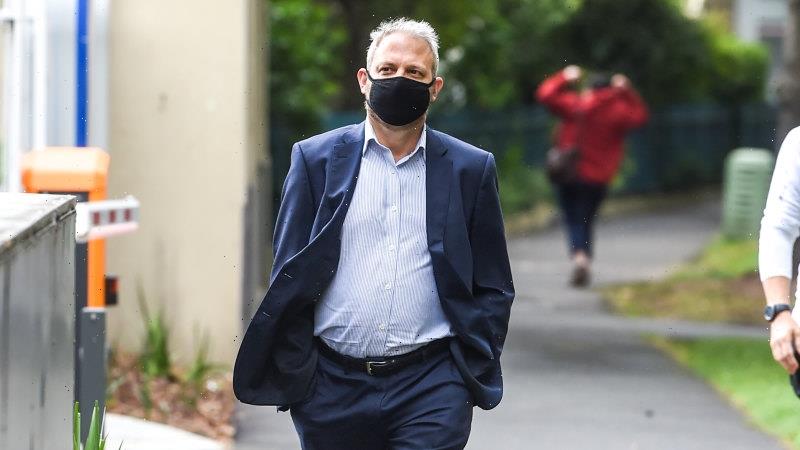