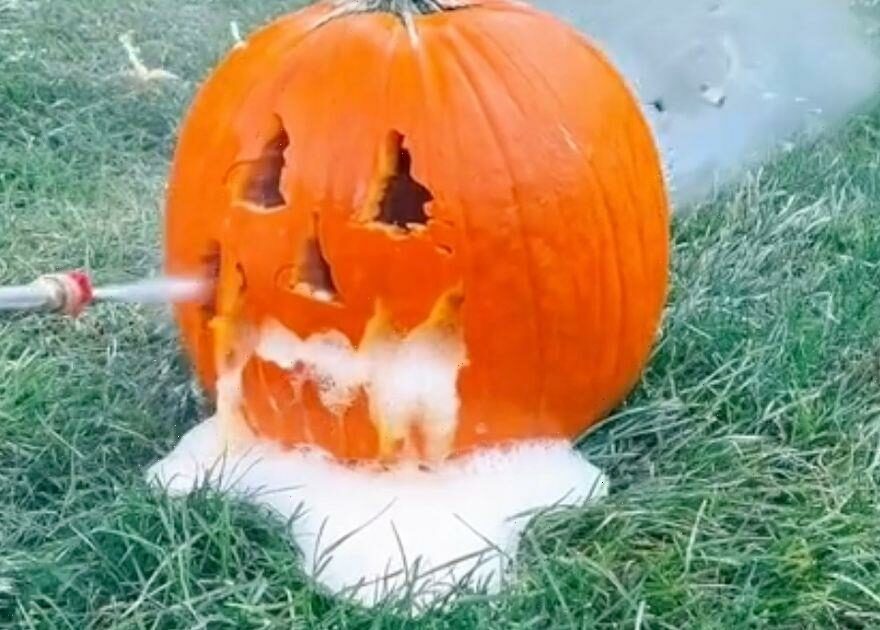 A man has tried out a TikTok pumpkin carving trend ahead of Halloween and called it a "game changer" after spending just seconds to make a Jack-o-lantern.

Kiel James Patrick said the result was unexpectedly amazing and the juice gave a "spooky effect" when it came spilling out of the pumpkin.

"Let's see if it actually works."

He turns on the pressure washer and blasts it over the pumpkin, carving the eyes in a triangular shape at ease.

Then he moves on to give the pumpkin a "nose".

In less than 30 seconds, Kiel finishes the decoration – with eyes, nose and a scary-looking mouth on the pumpkin.

His dog gets curious but quickly runs away when it realises the water spraying.

"Wow, that was really easy! I am blown away. That just saved me like an hour of carving! Game changer!" he added.

"This honest to God wasn't pre-cut or outlined. It was one take and I had no clue if it was going to work."

Some viewers were dubious and suggested Kiel had outlined the shape beforehand, but others noticed he might have cut through the back.

One said: "I did not just spend three hours of carving a pumpkin just to see this."

"What an awesome idea! Maybe an expandable beach towel inside would keep the back intact," a second suggested.

For more stories from the Daily Star, sign up to one of our newsletters here.

But some said the trick took away the "fun" element of spending time getting ready for the spooky season.

A viewer asked: "Why do you normally carve pumpkins if you consider it a chore and want to save time? I always thought it was just for fun."

"Carving is for fun, bye," another said and a third added: "Okay so now we're too lazy to carve pumpkins? How sad."