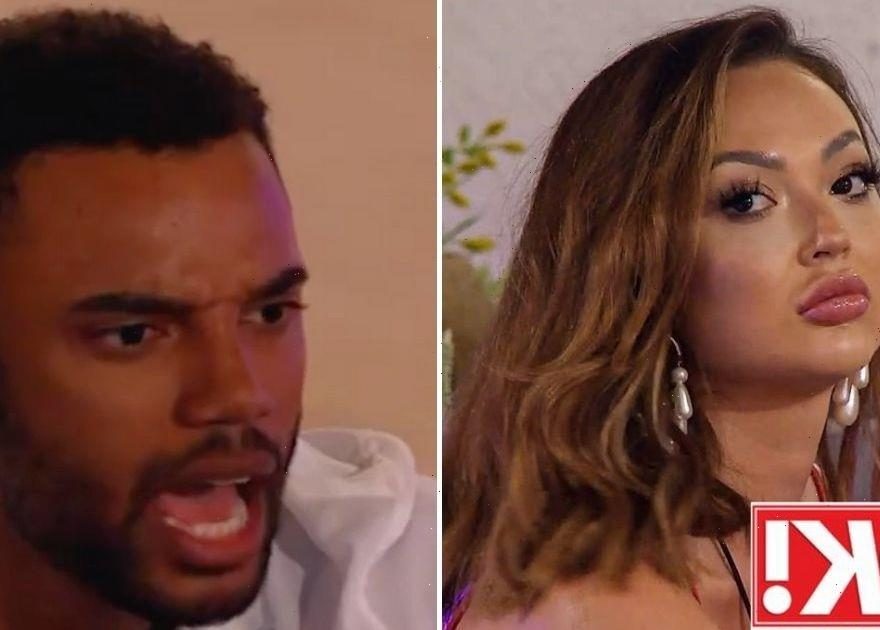 Sharon Gaffka has revealed her mutual connections with Love Island co-star Tyler Cruickshank and claims she's "not even surprised" by his actions towards her pal Kaz Kamwi.

The former civil servant, 25, spoke exclusively to OK! about her time in the villa and her thoughts on all that's happened on the ITV2 dating show since she's been back in the UK.

Admitting she keeps up with the show and watches it every night, Sharon isn't impressed with a number of things she's noticed after watching certain episodes back, particularly the men's behaviour.

Asked about her opinion on Kaz's interest potentially swaying back to Tyler following the dramatic Casa Amor twist, which saw both parties recouple with bombshells Matthew and Clarisse, Sharon said: "I don't want her to go there."

According to the beauty queen, Tyler is "definitely playing a game", and she suspects the Croydon local, 26, has been "leading Kaz astray to stay in".

Sharon was close to fashion influencer Kaz, 26, from the start of the show as they were both in the original lineup, along with Faye Winter and Liberty Poole.

Explaining that Kaz "loves affection", she confirmed her pal's softer side, adding: "I don't want her to, but I know she will follow her heart".

She explained: "Kaz loves affection, she wants someone to be affectionate all the time", which it doesn't look like the Essex beauty's current partner, Matthew McNabb, quite is.

"If Matthew doesn't pull his finger out of his a**e and be affectionate, she'll wanna go elsewhere", Sharon added.

Most shockingly, Sharon – who was recently linked to dumped islander Chuggs following an all-day drinking session – has revealed her connection to Tyler outside of the villa.

Annoyed at his behaviour towards Kaz and his inability to give straight answers about leading her on when confronted, Sharon said: "I know people connected to Tyler, so I'm not even surprised by half the stuff that's happened."

The cryptic comment will undoubtedly keep fans on their toes, wondering exactly what's been said about Tyler, and if his apparent reputation will precede him.

It comes as things are turned up a notch on the ITV2 reality show, with Kaz, Tyler, Clarisse and Matthew's ongoing 'love square' keeping fans on the edge of their seats wondering what will happen next.

Last night's recoupling saw Kaz pick Irish bombshell Matthew, much to the shock of viewers and Tyler, who was visibly shaken by her decision.

After delivering a heartfelt speech about trust and honesty – a clear dig towards her ex-beau, who she's repeatedly accused of lying – she picked the Irish hunk and planted a kiss on him in front of everyone.

But just as she grinned and sat down with her new man, Kaz delivered a blink-and-you'll-miss-it wink to her ex. Clarisse Juliette, 23, then coupled up with Tyler, but he couldn't seem to shake what had happened with Kaz.

It's left fans confused on whether it was simply a power move, or whether it could hint at things progressing between the two.

We're sure pal Sharon won't be happy if games are played with Kaz, but only time will tell!

For more juicy gossip on your favourite stars, sign up to our daily newsletter here