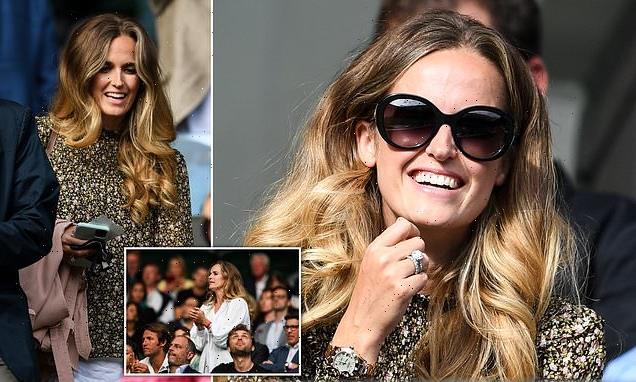 Kim Sears debuted an incredibly glamorous hairdo as she cheered her husband Andy Murray on at this year’s Wimbledon tournament.

The mother-of-four, 33, who welcomed a daughter in March, was sat courtside with her eyes fixed on the match as the former champion took on Germany’s unseeded Oscar Otte.

Looking effortlessly elegant, Kim, dressed in a smart floral blouse, sported a fashionable hairstyle with her luscious blonde locks curled as she sat down to watch Andy play. 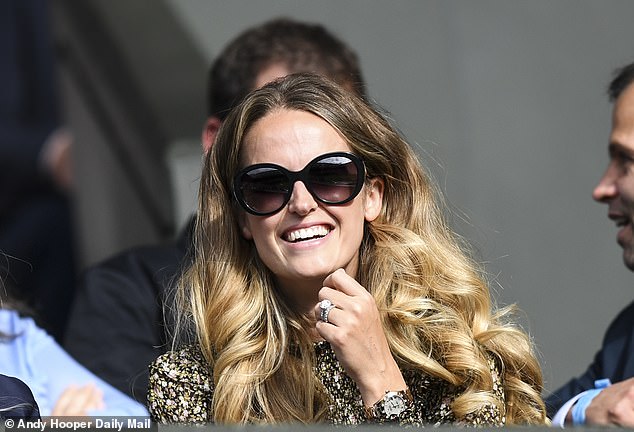 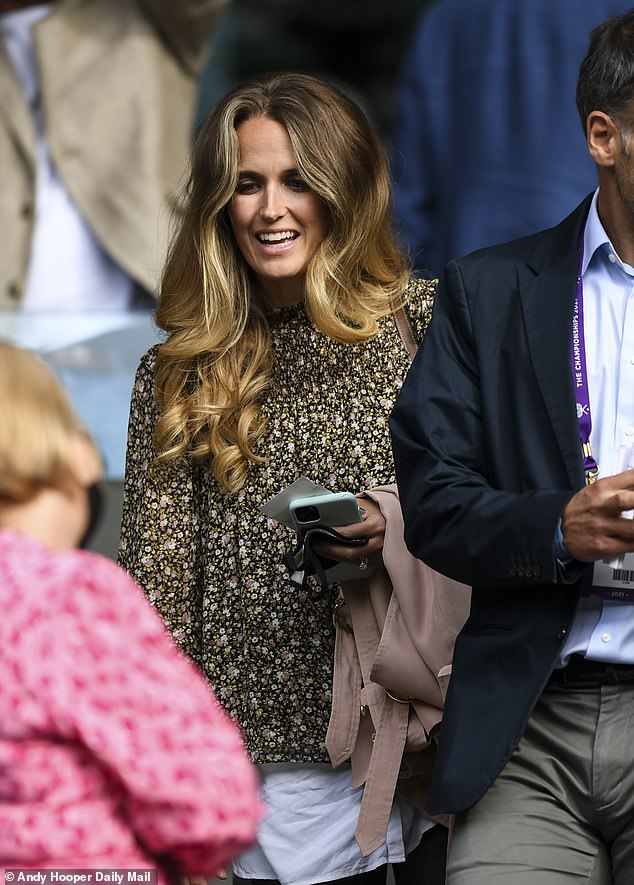 The mother-of-four (pictured), 33, who welcomed a daughter in March, was sat courtside with her eyes fixed on the match as the former champion took on Germany’s unseeded Oscar Otte 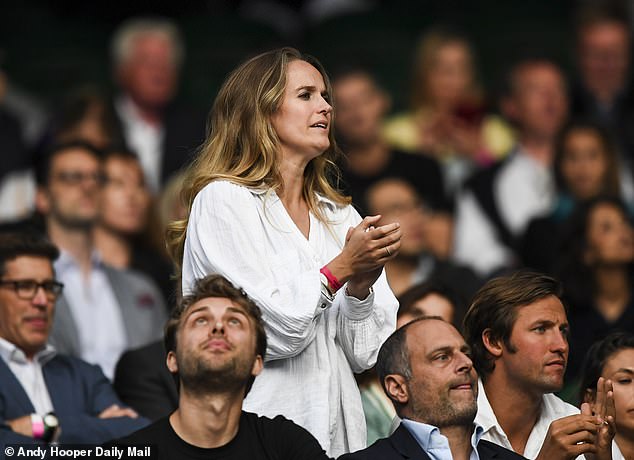 Yesterday, cheerleader Kim was spotted at the tournament, where she watched her husband win his first Wimbledon game in four years which saw him overcome 24th seed Nikoloz Basilashvili

A busy mother-of-four, Kim showed she still found the time to look her best when cheering on her man during the British tournament.

Wearing a blouse with long sleeves and dainty flower details over a pair of white shorts, the mother-of-four looked relaxed at Wimbledon today.

Her blonde locks cascaded down her shoulders, boasting honey and sandy highlights, while she finished off her look with a glamorous smattering of makeup.

She wore a discreet nude lipstick to complete the look and hid from the piercing sun with a pair of large sunglasses.

Ricky Walters, director of SALON64 in Soho, said Kim’s locks have ‘never looked better’, praising her ‘loose glam blow-dry that has clearly taken time and effort without being overkill’. 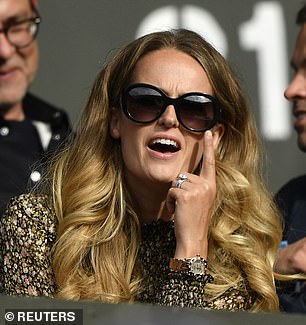 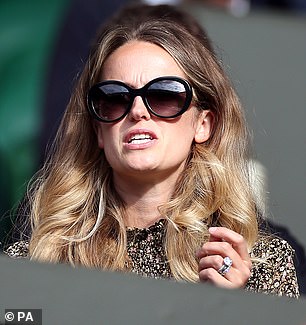 Kim, who is known for her candid reactions during her husband’s games, watched the match behind a pair of sunglasses 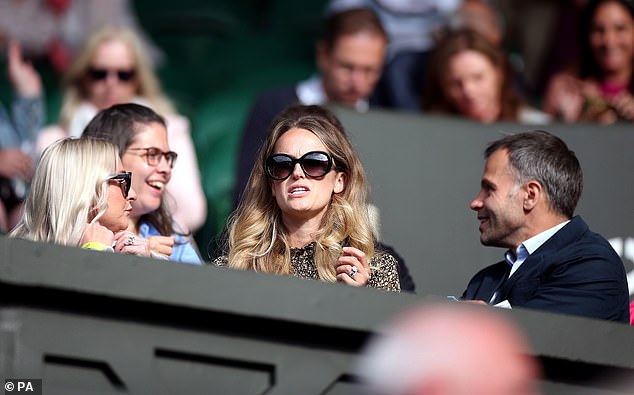 Looking effortlessly elegant, Kim (pictured centre), dressed in a smart floral blouse, sported a stylish hairstyle with her luscious blonde locks curled as she sat down to watch Andy play

The stylist told FEMAIL: ‘Looking back to 2020 where Kim’s hair was a little more undone, I feel this new polished version of herself is ace.’

He said the locks could be achieved by ‘wrapping her hair around a medium tong and gently raking through using a large comb or fingertips to give the ultimate glam summer vibe.’

He added that Kim’s sun-kissed look was right on trend for summer 2021.

‘A very soft root with bold blonde lengths and ends works well as a colour. We are seeing a huge amount of clients transitioning away from balayage and into a more highlighted look this summer,’ he said.

‘Looking back to early 2018 where Kim opted for a darker all over brunette, it appeared far too blocky and heavy and therefore I love her 2021 summer vibes,’ he said. 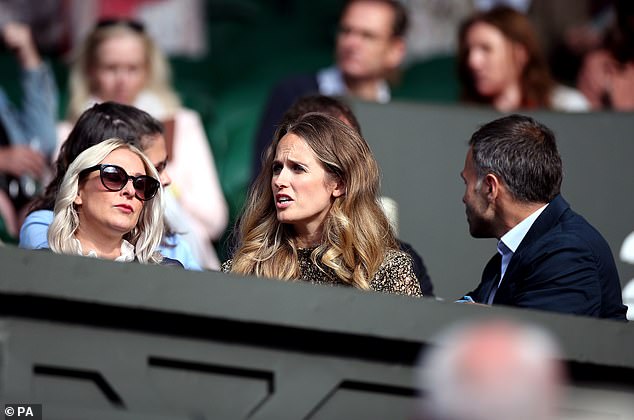 Her blonde locks tucked behind her ears, the mother-of-four waited impatiently for the game to start 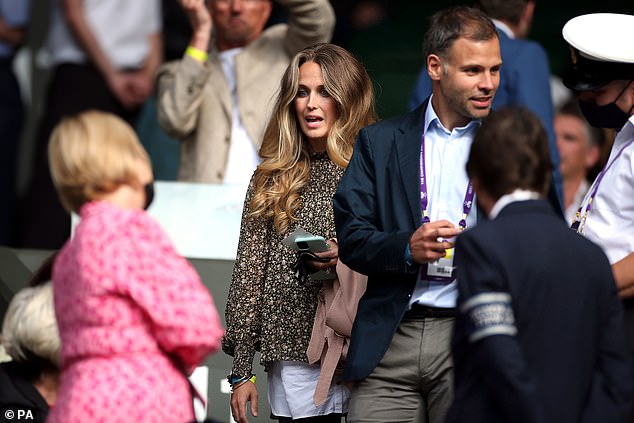 Phone at hand and sporting her glamorous ensemble, a cheerful Kim greeted people as she made her way to her seat

Murray had previously said he was resigned to not having his wife and four children – Sophia, five, Edie, three, Teddie, one, and a third daughter, born in March – watching him due to the coronavirus restrictions.

But Kim was able to attend yesterday and could be seen clapping from the stands in a white blouse and blue jeans.

Murray and Kim, who started dating in 2005, have been married for nearly six years following their Dunblane wedding in April 2015.

Murray gave a rare insight into his family life in at interview with The Times in October last year, explaining how he and Kim had coped during lockdown.

‘At the time coronavirus started I was rehabbing, and I was actually fine missing tennis, because everybody else was missing it as well,’ he said. ‘I just got to spend lots of time with my family at home. 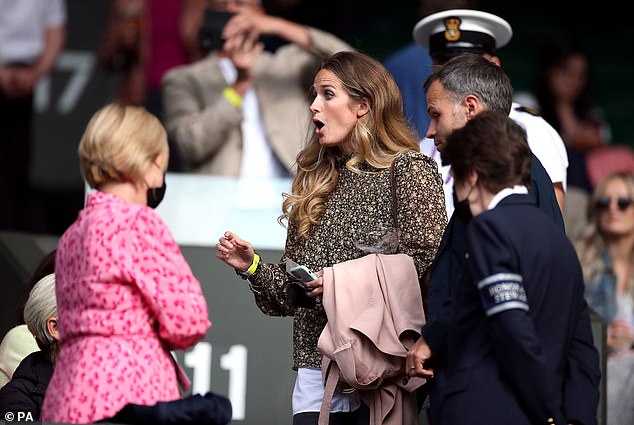 Kim, who brought a blush pink jacket with her, was ready to cheer on her husband during his second game at this year’s Wimbledon tournament 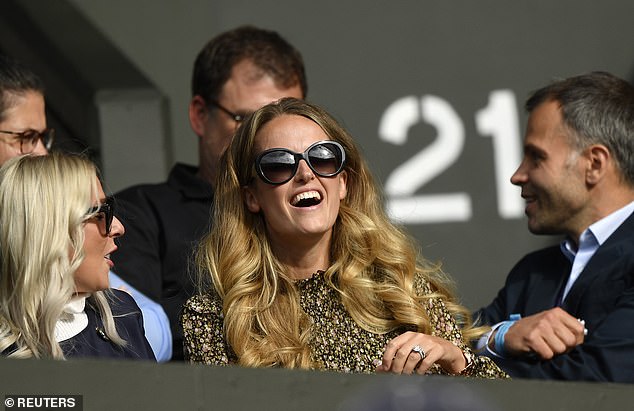 Murray’s return to SW19 was much anticipated after his lengthy injury problems.

At first, the two-time Wimbledon champion, 34, seemed to be sailing through his first-round match against 24th seed Nikoloz Basilashvili.

He comfortably won the first two sets and was 5-0 up in the third before going on to lose it 7-5 to the 29-year-old Georgian player. He eventually won the fourth 6-3.

Fans were delighted to see him on good form considering he has been plagued with injury issues.

Supporters could be heard shouting, ‘Looking like the old days, Andy’ and ‘We know you can play’ as his wife Kim and mother Judy cheered him on from courtside.