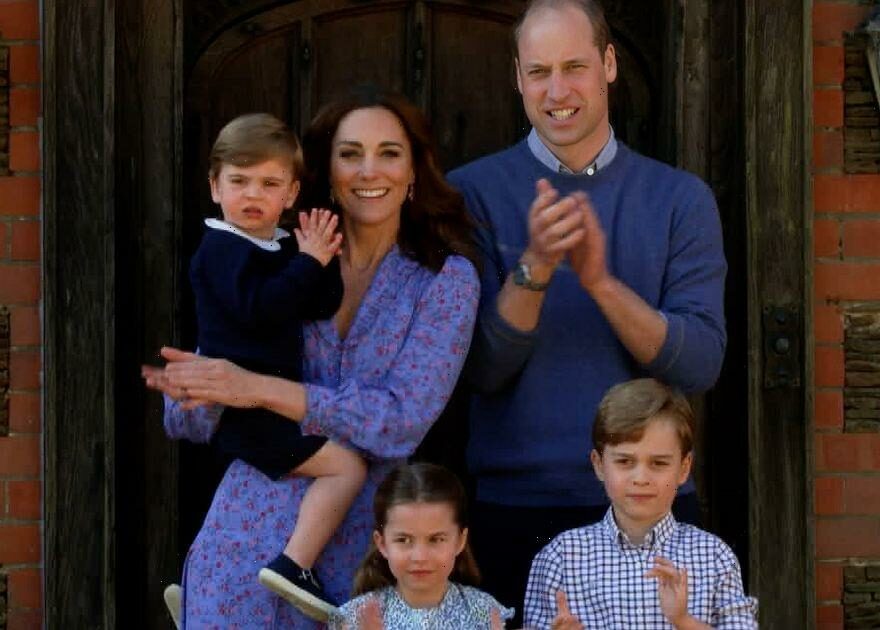 The Duke and Duchess of Cambridge have a number of useful parenting tips, and have even found ways to ensure their brood eat healthily and have an alternative to the naughty step.

Kate, 40, and Prince William, 39, are proud parents to Prince George, eight, Princess Charlotte, seven, and four year old Prince Louis, and while they're part of the Royal family, the Cambridges still have a relatively normal home life.

From making sure their screen time is limited to ensuring they spend some quality time with their grandparents, here we take a look into the Duke and Duchess' clever parenting tips and tricks they've shared over the years…

Get exclusive celebrity stories and fabulous photoshoots straight to your inbox with OK!'s daily newsletter

Like any other children, the Cambridge kids are still disciplined. But Kate has her own special take on the classic and divisive naughty step.

The Duchess has reportedly replaced it with a 'chat sofa', where George, Charlotte and Louis will be spoken to calmly by either Kate or William.

A source told The Sun: "There is no naughty step but there is a 'chat sofa'. The child will be taken away from the scene of the row or disruption and talked to calmly by either Kate or William.

"Things are explained and consequences are outlined – they never shout at the children."

Kate and William are bringing up their brood to make their own choices in life, and William opened up previously about George's decisions concerning football.

Speaking on That Peter Crouch Podcast back in July 2020, the Duke said: “I'm trying not to persuade him to be a Villa fan – I'm letting him choose his own way. It’s about finding what fits for him."

He continued, speaking about the importance of the team his children choose to support. William said: “Previously I was a bit concerned about him supporting Chelsea, but now Frank’s come in I feel the culture's a bit different at Chelsea and I’d be OK with it.

"I do like the values and the ethos of the club. I want them to look after the players and set a good example to the young fans. I want our children, when they go to the match, to come away loving what they've seen, enjoying it and seeing their role models behave in a way that we'd all want them to."

Kate likes to get her brood involved in cooking at home, and has previously told how George and Charlotte enjoy helping her to make homemade pizza and pasta.

The mum-of-three has also told how her children like healthy snacks, with Charlotte enjoying olives while Louis is a fan of beetroot.

Kate likes to ensure they all eat healthily, and has even come up with a trick to make sure they each eat their five-a-day, with the Duchess calling them "treats".

It's also believed that Kate's own healthy food choices have impacted her children's preferences, with the 40 year old famously living a very healthy lifestyle.

Kate is famously close to her parents Carole and Michael Middleton, and she regularly takes her children to stay over at their home in Berkshire.

Carole and Michael even looked after their grandchildren while Kate and William were on a royal tour of Pakistan in 2019, and also while the couple were competing against each other at the King's Cup sailing regatta.

Kate likes to ensure that George, Charlotte and Louis have strong relationships with all of their beloved grandparents, including the Duke and Duchess of Cornwall, too.

While they're definitely more privileged that the majority of families, royals still need help from time to time parenting their children.

William and Kate hired a nanny when George was a baby. Maria Teresa Turrion Borrallo has stayed with the family and cared for both Charlotte and Louis, too.

The couple also ask their family members for support and when, they welcomed their first child, they spent six weeks at Kate's parents' Berkshire home so her mum Carole could lend her a hand.

They may be members of one of the richest families in the world, but the Cambridge children are still given pocket money by their parents.

It was previously reported that Kate visited a store on King's Road with her three children and they each used their own allowances to pay for their goods.

Alexa, who worked at the store, tweeted at the time: “I’ve always been a Kate Middleton fan… today she was in one of my stores on the Kings Road with George and Charlotte, what the team told me about how she was with them and how the kids were with each other makes me like her even more!”

She added: “I wasn’t there but she talked to my team, the kids had a budget that they stuck to and paid for their own things with their own money.

“Just normal well brought up children and a normal parent trying to do the right thing and that’s just lovely!”

George, Charlotte and Louis enjoy watching TV just like any other children, but Kate strictly limits their screen time as she prefers them to be playing outdoors when possible.

In an open letter published in May 2018 in order to support Children's Hospice Week, Kate told how she cherishes "simple family moments" such as "playing outside together".

Speaking on the podcast Happy Baby Happy Mum, Kate also said: “As children, we spent a lot of time outside and it’s something I’m really passionate about.

“I think it’s so great for physical and mental wellbeing and laying those foundations.”

For all the latest celebrity gossip, sign up to our daily newsletter here .