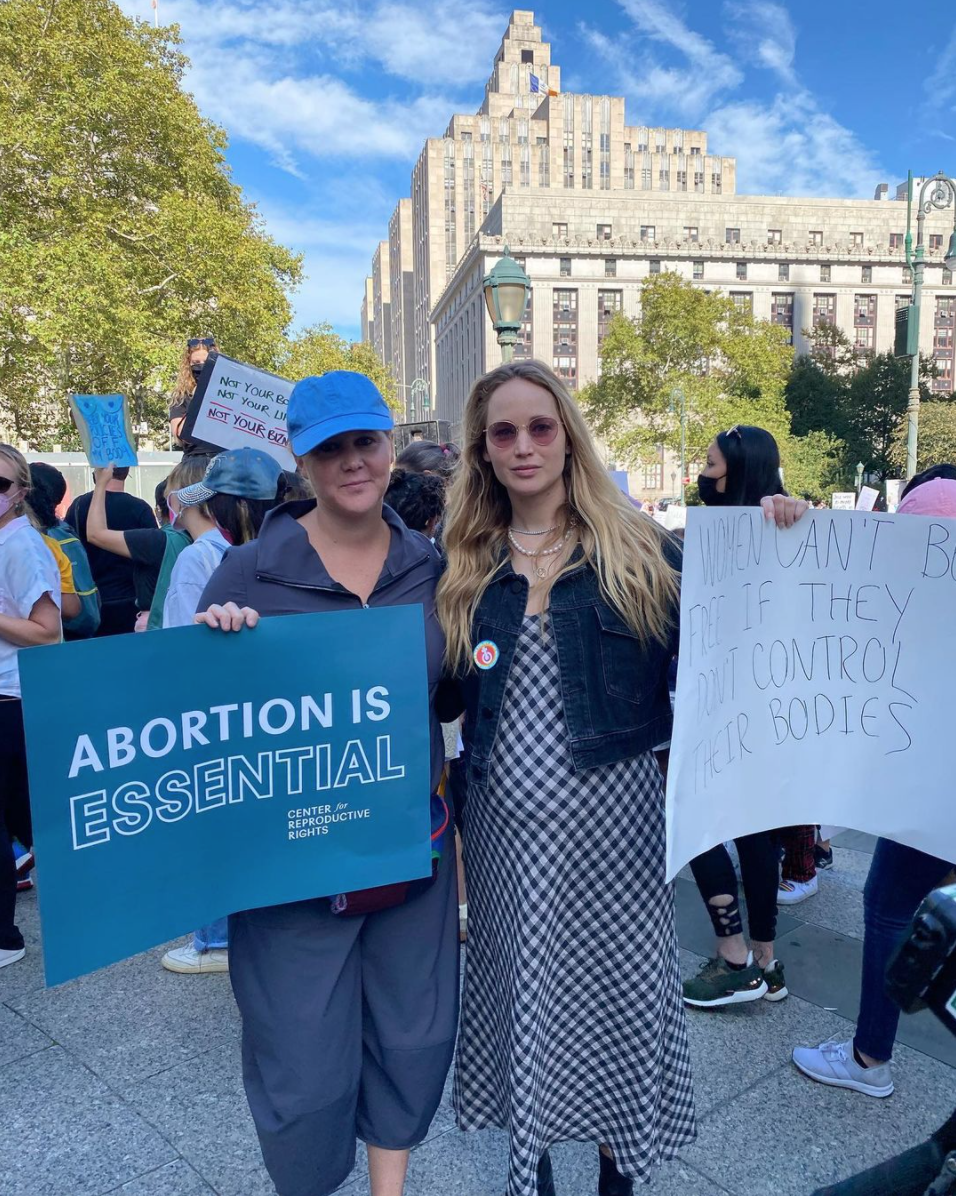 Protesting while expecting. Jennifer Lawrence made an appearance the Women’s March with Amy Schumer to support women’s right to safe abortions on Saturday, October 2.

“I don’t have a uterus and she is pregnant but we out here @womensmarch @plannedparenthood #rallyforabortionjustice 🙌🏼🙌🏼🙌🏼,” Schumer, 40, captioned the photo via Instagram.

In the photo, Lawrence’s baby bump was in full view as she wears a black and white gingham dress under a denim jacket. The Hunger Games star, 31, accessorized with layered necklaces, round sunglasses and a homemade protest sign.

Celebrity BFFs Through the Years: Photos

“Women can’t be free if they don’t control their bodies,” Lawrence’s poster read.

The Inside Amy Schumer star, meanwhile, held a blue sign from the Center for Reproductive Rights that read, “Abortion is essential.”

Lawrence’s rep confirmed in September that the Oscar winner is expecting a child with art gallery owner Cooke Maroney, who the actress married in October 2019.

Schumer and Lawrence have been friends for years, and they’ve both been outspoken about women’s rights, including their support for access to safe abortions. In 2015, Schumer visited Lawrence after hearing about the Planned Parenthood shooting in Colorado Springs, which killed three people.

Celebs Who Hid Baby Bumps Amid Quarantine: Halsey and More

“Amy’s the most empathetic person I’ve ever met in my life. When she came over this morning, she was crying,” the X-Men star told Glamour in the February 2016 cover story. “She had just…seen the news about the shooting at Planned Parenthood. It’s so awful…. It isn’t an attack on abortions; it’s an attack on women. Because Planned Parenthood is so much more [than abortion]. My mom was really religious with me when I was young. She’s not so much anymore. And I wouldn’t have been able to get birth control if it weren’t for Planned P. I wouldn’t have been able to get condoms and birth control and all these things I needed as a normal teenager who was growing up in a Jesus house.”

More recently, Schumer has been vocal about another reproductive health issue, endometriosis.

The Trainwreck star has been battling the disease for years and had her uterus and appendix removed last month to deal with her pain. She has been open about the process with her followers, revealing that the surgery immediately made her feel better.

“All my lifelong pain explained and lifted out of my body. I am already a changed person,” the comedian, who shares son Gene, 2, with husband Chris Fischer, shared in September after learning the surgery removed a tumor and many spots of endometriosis. “I am busting with joy for the new energy I have to be with my son.”