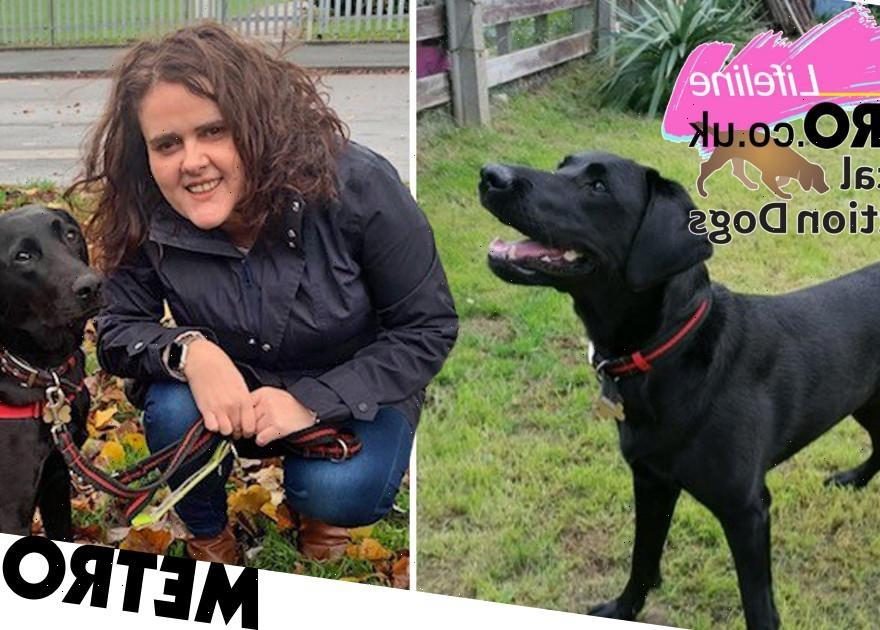 When Louise Thompson talks about her two-year-old Labrador Mercedes, she describes her beloved dog as the ‘missing piece of her puzzle’.

That’s because Mercedes is more than just a pet to Louise, she is a lifeline – a trained Medical Alert Assisant Dog that gives the 40-year-old the chance to live a better life.

For over 16 years Louise’s health was in turmoil and left her living in fear. Her worries first started when began passing out and having seizures, up to three or four times per year.

At first doctors were left stumped. One even told her it was all in her head, while another suggested that she was ‘attention seeking’.

Then, in 2015, following years of living with her fainting spells, Louise was hit with a bout of pneumonia.

After the illness, she rushed back to her job as a nurse – but then began passing out twice a day.

‘It was a vicious cycle,’ she tells Metro.co.uk.

‘I would pass out and I would even need resuscitation sometimes. On one occasion, I fainted after a blood test and my heart rate was 160. I couldn’t stand up.

‘I was admitted to hospital, but then they wanted to discharge me and I asked what I should do when I got home. The only answer they had for me was, “lie down”.’ 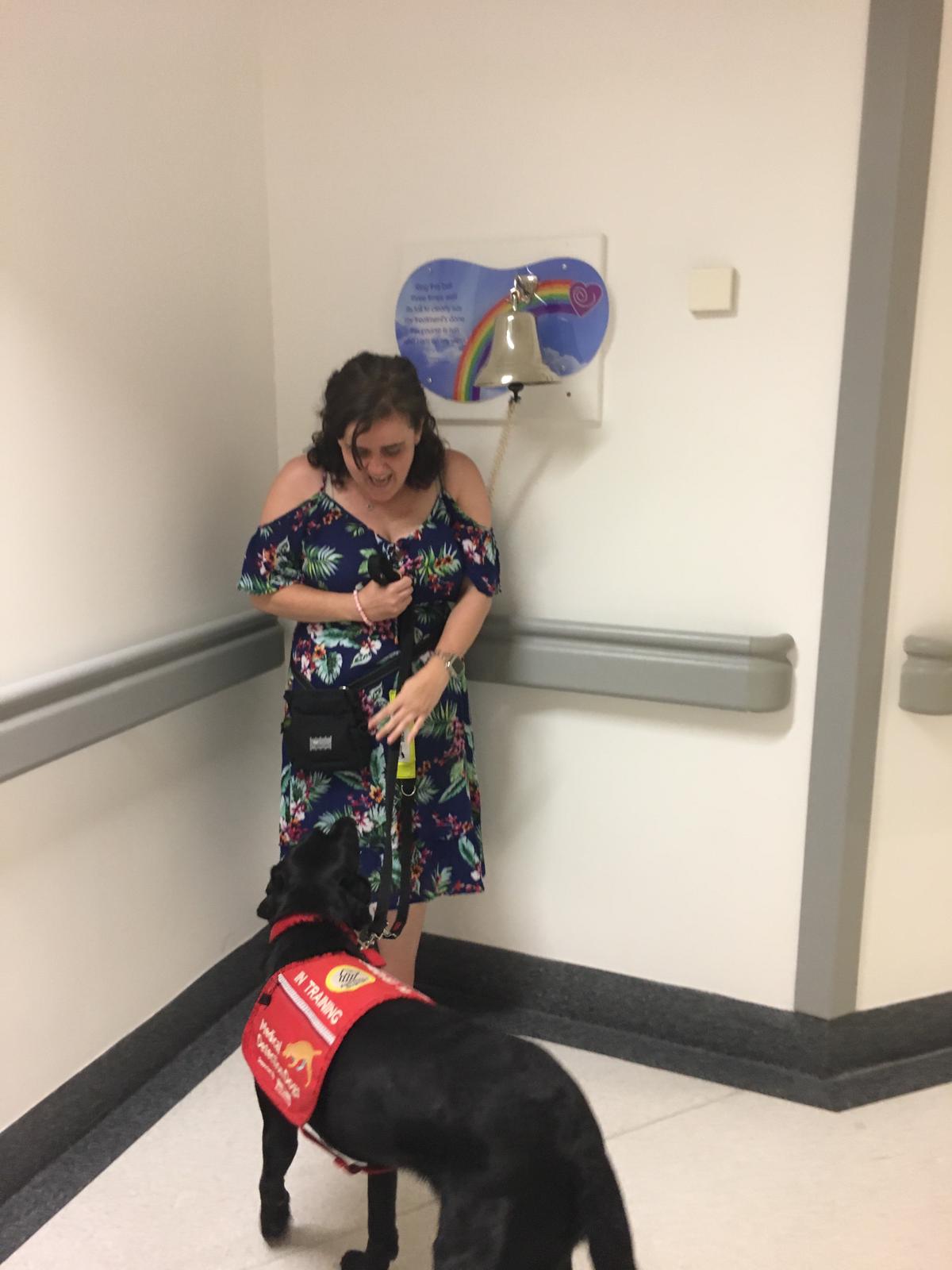 When she was 34, Louise ended up in hospital for six weeks because she got to the point where she couldn’t sit up even to eat without passing out.

‘We had to go really slowly, sitting up for as long as I could without fainting. It was exhausting.’

After four months off work, Louise tried to return to her role as a nurse, but again her days were disrupted with frequent fainting.

‘It was a really difficult time in my life,’ Louise tells us. ‘I was scared to leave the house, I couldn’t do my job, I was exhausted all the time. I had so much of my freedom robbed from me. It was awful.’

Aware that it wasn’t a feasible way to work, she faced early retirement due to ill health. Even more frustrating, Louise still didn’t know what was actually wrong with her.

It took 16 years in total to get a diagnosis, and in 2016, doctors finally told Louise that she was suffering from Postural Tachycardia Syndrome, known as PoTS, which is an abnormal increase in heart rate that occurs after sitting up or standing that can cause a drop in blood supply to the heart and brain and induce fainting.

Although relieved to have an official diagnosis, Louise couldn’t help but worry about how she would cope – until she spotted a friend on social media talking about how her husband was out walking her ‘assistance dog’.

Intrigued, she did some research and came across a website for the charity, Medical Detection Dogs, which provide specially trained dogs that alert owners when their health is in danger from a variety of conditions, including PoTS.

Initially, Louise wan’t convinced that she was unwell enough to be considered for one of their dogs – despite fearing leaving the house in case she lost consciousness. Even so, she decided she had nothing to lose from applying for help.

‘I was really surprised to be invited to an awareness day, which is an initial meeting with the MDD group to find out more about them and to see if they could be a good fit.’ says Louise.

‘Following an interview with the charity, I was told I could come to a handling day to meet some of the dogs and take the initial step towards finding a match. It felt surreal because I never expected to get that far in the process.’

However, Louise’s journey to finding her perfect dog wasn’t straightforward.

Her first match was unsuccessful and the second dog she was paired with unfortunately developed allergies and had to withdraw from the programme.

However, it was third time lucky with black Lab Mercedes, who Louise met in February 2019, and describes as both her companion and partner in crime.

‘She is someone I can look after and she does the same in return,’ says Louise. ‘She is like my shadow and we do everything together’.

The first night she spent with Mercedes was following a day of invasive treatment after discovering a lump in her breast, which later turned out to be cancer.

Louise was laid up in bed, sore and surrounded by cushions after having the biopsy, and when she woke in the morning she discovered that Mercedes had crawled up next to her to cuddle her while she slept.

‘I was in love. I just knew she had to be the one,’ says Louise.

‘Then I sadly got the diagnosis of breast cancer, so getting Mercedes got slightly delayed because I had so much going on with my radiotherapy and treatment. We had lots of visits though and she gave me something to focus on during that really difficult time.

‘She was officially mine and with me full-time by December 2019.’

The change in Louise’s life since getting Mercedes has been dramatic. She now has so much more freedom and confidence to do the things she wants to do without fear.

‘It feels like I not only have a superhero dog but a family in Medical Detection Dogs’, she says.

Mercedes can tell if something is wrong by noticing a change in Louise’s scent when her heart rate changes, and will let on to her owner by zig-zagging in front of her, staring at her more intensely, jumping up to her, or barking loudly if all else fails.

This gives Louise time to sit or lie down, wherever she is, without risk of injury – and because Mercedes is clearly identifiable as an Assistance Dog with her special red coat, she also acts as a visual aid to strangers.

‘With her by my side I have been able to go out longer alone and to different places,’ says Louise. ‘She has given me my confidence back. I am no longer bothered about embarrassing myself and my family are less worried about me’.

Louise is now able to go to the gym unsupervised, use public transport and be a lot more sociable.

Describing Mercedes as the dog version of herself, she says: ‘We tend to mirror each other and are usually tired or have energy at the same time.

‘Even on down days, I have to walk her which perks me up. Just being around her makes me smile.

‘She is just an extension of me, we do everything together. And I do think that lockdown has given us more time to make our bond even stronger.

‘I didn’t expect to connection so completely with my dog in this way. She just knows everything, it’s actually amazing to witness.

‘I’m in hospital a lot less now, but whenever I do have to go in – for breathing issues related to the pneumonia – she is always on my mind. When I was a nurse, patients would always say to me, “I want to get back to my children”. I feel like I know what they mean now, because even though I don’t have children, I feel the same way about Mercedes.’

And to anyone thinking about approaching the charity for help, Louise would definitely encourage them to go for it – even if they aren’t sure if they are eligible.

Finding the perfect match can be hard work, there are emotional ups and downs but Louise believes it is well worth it. She describes her bond with Mercedes as both life changing and enhancing.

She adds: ‘I am a happier and much better person because of Mercedes, and I can’t begin to thank MDD enough.’