Mitch Harrison, founder of Transform Fitness in Kenai Alaska, has been a fierce athlete all his life. He was a basketball star in high school, and then at Stanford University and the University of Utah. After a career-ended injury and a lot of self-reflection, Harrison decided to begin his gender transition in 2016. In 2020, he became the first transgender competitor on Dwayne “The Rock” Johnson’s fitness competition show, The Titan Games.

WHEN I knew I made the show, when I got the call, there was a side of me—the competitive athlete—that wanted to go into this and compete. It’s a TV competition. You want to win; that’s kind of the point. And also, what’s going to make it fun to watch is people being competitive.

GROWING UP [in a religious and conservative family], I wasn’t really allowed to ask questions about my gender identity—to truly understand, Why do I feel these things? Why is this a part of me? A lot of people didn’t realize or know that I was going through a lot internally, emotionally, spiritually. I’ll always say that basketball was my one true love, but at the same time, it became kind of a scapegoat for me in terms of having a safe space to express my masculinity.

I played a little professionally overseas and I was injured, and my injuries forced me to retire a lot sooner than I wanted to. I was heartbroken and devastated to not play, because not only did I love it so much, but also because there was so much of my identity in basketball, as a basketball player. So the devastation had a lot to do with, Who am I? Because I did not know how to answer that question. It forced me to sit with myself. There was a good chunk of time between retiring and actually starting my gender transition when I just kind of had to figure life out. It was a period of time that was very difficult, but probably the most important period of my life. 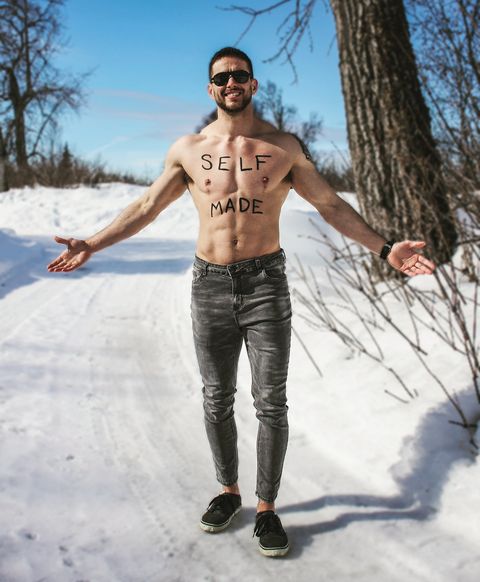 Once I was forced to retire, I had my suitcase and a backpack, and I decided, I’m going to move to Colorado. My girlfriend at the time lived in Colorado, and I wanted out of the Utah bubble; I needed to set my own roots. While I was in Colorado, I went through a lot of conflict and turmoil leading up to making the decision to start my gender transition. I had a lot of support there, which was such a blessing.

I blame my wife [for the move to Alaska]. I had started my gender transition in 2016, and we had been dating for about a year at that point. She was my support system. She was at every doctor’s visit, all my therapy appointments—all of that. And then we got engaged. She was actually in culinary school, and to graduate, students do an externship program. One of the programs was in Alaska. I had recently left my security job, and I thought, I think I’m ready for a new start anyway. So we said, ‘Okay, this might be kind of fun.’ We had no idea what we were getting ourselves into. It didn’t take long for us to settle in and just completely fall in love with Alaska. It’s gorgeous. We love being outside and exploring. Every day, we wake up and just say, ‘Wow, this is real life.’ 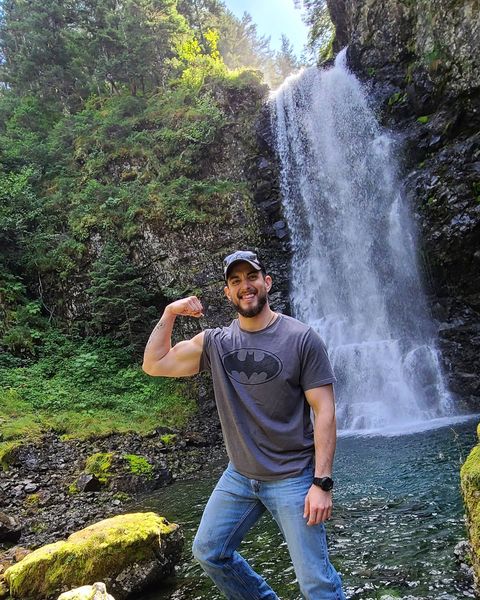 WHEN I received a random messaged from one of the [Titan Games] casting producers, I thought, This is not real. No way. I didn’t really watch season one, but of course I knew what the show was because I’m a Dwayne Johnson fan. I love his movies. They reached out and encouraged me to apply and I said, ‘Yeah, absolutely.’ So I went through that process and then [they said], ‘Hey, you made it past round one. Now you made it past round two.’ All the way up until being invited to what they called ‘the combine’ in January 2020.

So when he came over to me and he just gave me the biggest hug, it literally just came out of my mouth: [“I wanted to make you more proud than that.”] Him stepping back and just really making this long, deep eye contact with me and telling me he was proud…there was absolutely no question in that moment. It was very sincere. He was proud. And so, you know, I was still very devastated and disappointed, but that helped me hold my chin up a little higher.

Most of my immediate family, I haven’t spoken to them in years, but I do have a close relationship with my older sister. She said, ‘I cried my eyes out when [The Rock] said that to you because I know how much you’ve longed for somebody that you look up to to be proud of you.’ 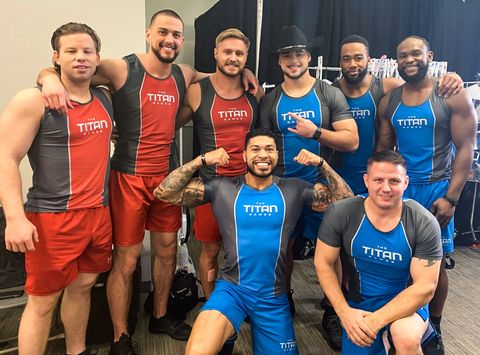 Family expectations, the church community—[there are] all these other expectations that I had basically stepped away from because I’m making a different choice for myself. But there was always that lagging feeling of, Is there anybody that’s proud of me? Making this decision for myself and being in this process, I know that I’ve had a lot of great support, but I’ve kind of been leading myself. Which is very empowering, but of course, every once in a while, you just want somebody that you look up to—regardless of who it is—to tell you that they’re proud of you.

That’s exactly what it meant to me. It was so much more than just the athletic side of it. And also, just being the first trans athlete on the show, I felt like, ‘Man, you have no idea how much this means to me.’ It was a very profound moment in so many different ways. And then to watch my episode and see that even [The Rock] got choked up, I thought, Maybe he saw in my eyes just how much that meant to me. It’s a moment I’ll never forget for the rest of my life.

I’d hoped for [my appearance on The Titan Games] to be kind of an instrument for people to have open discussions about [transgender representation in sports]. Obviously, it’s a very complex issue, but that doesn’t mean we should just take that opportunity away. In order to find resolution and move forward, we have to have these discussions. This is how we find answers.

“This is our chance to honor those before us, and then continue to make those ripples through time.”

I’ve actually gotten a slew of messages on social media from people watching the show, saying things like, ‘You know, it was a really touchy subject in my house, but then we saw you on the show and it got us talking, and we had great talks about it.’ That’s what I want. That means everything: seeing me as a human being, and allow[ing] that to open a discussion for people to see [transgender people] are just people. They just want to pursue the things they’re passionate about and find their joy and happiness. And if that’s sports, why should we close that opportunity off?

[To other transgender athletes out there]: Regardless of the obstacles in front of you, always stand true to yourself. I think back to times like the early 1900s through the 1940s and 1950s, when [members of the LGBTQ+ community] were under the radar; there was a stance they were taking in terms of knowing that what they were doing, they could technically get in a lot of trouble for it, but they still remained true to themselves in spite of it. They decided, You know what? This is me. And maybe in their lifetime, they didn’t get to experience the fruits of their efforts, but it caused ripples through time. And now we’re getting to reap the benefits of their truth.

This is our chance to honor those before us, and then continue to make those ripples through time. Hopefully we get to experience it, but if not, we’re going to pass this down and it’s going to mean something.