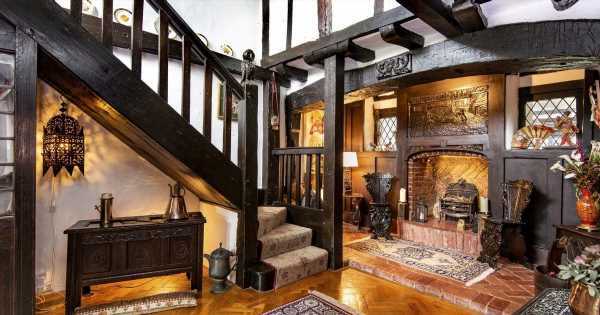 A gorgeous Grade II listed building which inspired the game Cluedo has gone up for sale.

We all the the boardgames from childhood, holidays with no WiFi and pub trips, but have you ever wondered about the design of the rooms?

Well, originally, Cluedo was actually called Murder at Tudor Close after the former hotel it was based on.

Then, it was renamed and sold millions of copies around the globe.

Tudor close became the inspiration for the murder mystery classic after a 1937 refurbishment introduced a billiards room, ball room, ladies bar and restaurant.

And now you can own a piece of gaming history for “offers above £1million”.

So, yeah, you’ll need a fair bit of cash…

The current owners stated that they have carried on an old tradition and hosted popular Cluedo themed parties over the years.

Tudor Close was built in the late 1920s in a ‘Tudor-bethan’ style meaning it features stunning period features and classic designs.

The premises was converted from cottages to a hotel in the 1930s and it was frequented by stars including Cary Grant, Bette Davis, Errol Flynn and a young Julie Andrews.

It lasted as a hotel for 20 years before being restored to a private home in the 1950s. The iconic residence, which was on Dean Court Road, Rottingdean, East Sussex, was also the backdrop for the 1949 film The Adventures Of Jane.

So it’s a superstar home to live in!

In the listing, agents Brand Vaughan, said: "Follow in the footsteps of Cary Grant and Bette Davies in this unique arts and crafts 4/5 bedroom house with a sunny terrace and a garage which once formed the main entrance, guest foyer and lounge of the famous 1930’s Tudor Close Hotel.

"This was frequented by Hollywood stars and reputed to have invented the party game of Cluedo, with first editions called Murder at Tudor Close."

Now, the building has traditional oak doors, exposed beam ceilings and stone fireplaces and a stunning reception room, which was formerly the lounge of the old hotel.

An L-shaped room, which features the original bar, is rumoured to have hosted Julie Andrews for song nights as her parents worked at the hotel.

Other noteworthy features, include the hotel telephone booth in the entrance hall and a secret side passage leading from the kitchen to the bar.

“These include the hotel telephone booth in the entrance hall, huge oak beams beautiful carvings and an open fireplace in one of the reception rooms.

"Historic and spacious homes of this type do not appear on the market often and sell fast."

The current owners described the stunning property as a “quiet, secure oasis in the heart of an historic village”.

They said: “The house is ideal for entertaining – friends have loved coming for our Cluedo parties – and everything we need – schools, shops, stations, stables and cinema are all within easy reach.

For more information, reach out to the agents: BrandVaugh.co.uk