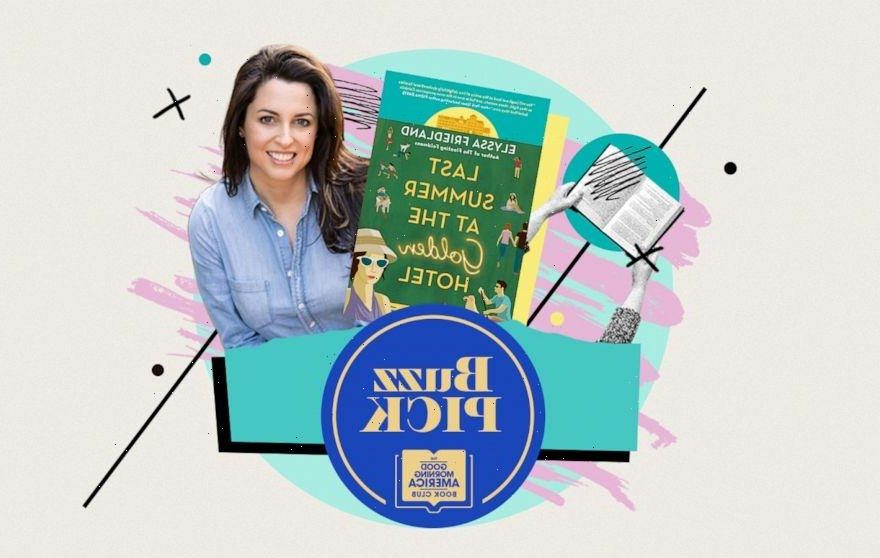 If you’ve finished our “GMA” Book Club pick this month and are craving something else to read, look no further than our new digital series, “GMA” Buzz Picks. Each week, we’ll feature a new book that we’re also reading this month to give our audience even more literary adventures. Get started with our latest pick below!

If you’re looking for a summer getaway, this week’s “GMA” Buzz Pick, “Last Summer at the Golden Hotel” by Elyssa Friedland, may be the perfect book for you.

Friedland’s latest novel is a funny, fast-paced and nostalgia-filled book, which takes readers to The Golden Hotel, a glamorous resort in the Catskills, which served as a second home to the book’s two main families — the Goldmans and the Weingolds — best friends and business partners who run the hotel.

In its heyday, the Golden Hotel was the crown jewel of the Catskills’ vacation scene, catering to well-heeled guests and celebrities. But after 60 years, the Catskills have become an unpopular vacation spot and the resort has lost its luster and clientele. At the center of it all, the relationship between the Goldmans and the Weingolds isn’t what it used to be either.

But when a developer comes in with an offer to buy the entire property and to turn it into a casino, the two families are forced to come together again to make a heart-wrenching decision to sell or save their beloved hotel.

Along the way, long-buried secrets emerge, new dramas and a financial scandal erupt, and everyone from the traditional grandparents to the millennial grandchildren want a say in the hotel’s future.

“My book has been described as the love child of ‘Dirty Dancing,’ ‘The Marvelous Mrs. Maisel’ and that show you can’t say on morning TV that rhymes with ‘Pitt’s Creek,'” Friedland told “Good Morning America.” “Yes, that means my book has three parents, but they’re all awesome. I’m thrilled to be a ‘GMA’ Buzz Pick. Happy reading!”

Get started with an excerpt below and get a copy of the book here.

As was tradition, Louise Goldman took the stage after the appetizer course was served at the final banquet dinner of the summer at the Golden Hotel. Her dress, beaded, formfitting, and floor-length—always a gown for the last night—dazzled as she mounted the steps and walked slowly toward the podium. The crowd of four hundred looked at her from their round tables, upon which white-jacketed waiters were setting down heaping portions of steaming brisket, dimpled mashed potatoes, and braised carrots. Goblets of thick, glistening gravy were placed alongside the meat in silver vessels, and waiters who dripped on the white cloths would escape rebuke that night, but only because it was the last night of the summer, and tips were already sealed into tidy envelopes. Such was the joy of closing out a successful season at the Golden Hotel that even Marty, the captain of the dining room, who kept watch over his “boys” like a general in a foxhole, would let things slide. How could anyone not feel at ease in the warm, wood-paneled dining room of the Golden Hotel, which played summer palace to so many returning guests year after year? The place was steeped in tradition and memories, each room a waffle of nooks and crannies that meant something different, but of equal sentimental value, to everyone who paid a visit.

From her perch behind the microphone, Louise watched her family. They were seated at the traditional “owners’ table.” Louise’s daughter, Aimee, a cherub of a twelve-year-old, full-cheeked with a pink complexion, was seated next to Peter Weingold, and next to Peter, his twin, Brian, who was hitting his brother repeatedly with a slap bracelet. Rounding out the table were Amos and Fanny Weingold, partners to the Goldmans and parents of the twin boys. Amos had been best friends with Louise’s husband, Benny, since they were old enough to sit alone on the stoop of their adjacent Lower East Side brownstones. “You play jacks?” Benny had asked Amos. Amos had said yes, and from that point on, they were inseparable. They went to Brooklyn College together, drove cross-country together, worried their mothers together, and—eventually—opened the Golden Hotel together. What if Amos hadn’t liked jacks? Louise sometimes shuddered when she considered that affinity could have dictated the course of a life.

“Hello, dear friends,” Louise purred into the microphone. She knew just how to make her voice sultry without sounding salacious—the trick was to pull from the lungs, not the throat. A few hundred heads murmured hello back, ready to delight in her song. “I can’t thank you enough for helping to make this perhaps our most memorable summer ever at the Golden Hotel.”

Louise said that same line every year, but guests happily absorbed the compliment anyway, even the repeat customers, who must have heard her say it at least a dozen times by now. But maybe the line was true. Maybe the Golden Hotel was like a cabernet stored in oak, improving with age, every additional summer layering the place with more character and depth. She tried not to think about the fact that for the first time in longer than she could recall, the hotel was not at capacity for Labor Day weekend. Close to, but not at full occupancy. Benny had started to tell her the specific numbers, but she’d told him a hairdresser appointment beckoned. Louise had wanted to stop by Roberta’s on the lower level to have her raven locks teased before dinner. With any luck, Janet, the hotel’s resident makeup artist, would also be available to touch up her makeup. Janet knew the best colors to bring out the green and gold specks in Louise’s hazel eyes; she’d trained at the Chanel counter in Lord & Taylor. Besides, Louise didn’t want to hear upsetting news, not when the final banquet was hours away. She had never been able to handle disappointment well.

“I can’t remember a more exciting Gold Rush than we saw today—congrats, Rosenblum family; you certainly earned your place in history.” Louise gestured to the plaque on the eastern wall of the ballroom, where winners of the annual obstacle course competition held on the last day of summer merited a spot of honor. “I just wish you hadn’t had to push the Friedmans into Lake Winetka to clinch your victory.”

Polite laughter from around the room. Benny flashed a thumbs-up. Fanny wasn’t paying attention. She was trying to keep her teenage boys in order, especially Brian, who seemed to be the cause of most of Fanny’s gray hairs. Why didn’t she color them, like Louise did? The Golden Hotel had a fine hairdresser on premises, a Frenchman they’d stolen away for the summer from a Manhattan salon. And why did Fanny have to wear that awful dress on such a festive evening? It wasn’t even floor-length. And it was a sallow beige, the color of Aimee’s cheeks when she was under the weather. The guests could go and upend the formality that made the Golden Hotel special, but the relaxing of the dress code shouldn’t come from the owners. She’d just heard that Brown’s had done away with jackets for the men on Friday nights. And Grossinger’s was allowing bathing suits at the breakfast buffet. Louise planned to speak to Benny about it tonight. He listened to her best when she put on her silk nightgown and rubbed his back.

From the stage, Louise watched Amos and Benny chatting animatedly. Their unblemished friendship over so many years was a marvel. If only she and Fanny could click the way their husbands did. Aimee was busy staring at Brian Weingold instead of watching her mother, and Peter Weingold was staring at Aimee. It was a love triangle that would concern Louise if the kids were a little older. For now, she’d just keep an eye out. Her daughter wasn’t going to become a Weingold. Not with Louise the doyenne of a luxury resort that hosted the finest families from Long Island, New York City, and New Jersey; no doubt highly eligible sons would be presented to Louise and Benny on silver platters in due course. Aimee was pretty and bright, with clear blue eyes that didn’t come from her or Benny. Perhaps a recessive gene. Perhaps . . . well, there no sense thinking about that now. The point was, Aimee would have her pick of suitors. The lone child of the Goldman family needed a suitable mate, and that person wasn’t going to come from the owners’ table.