George Clooney and Julia Roberts are joining the list of Hollywood celebrities shooting in Australia with a romantic comedy that will film in Queensland later this year.

Called Ticket To Ride, the movie will be directed by Ol Parker, who is best known as the writer of The Best Exotic Marigold Hotel and director of Mamma Mia! Here We Go Again.

The shoot is scheduled for the Whitsundays and southern Queensland in November. 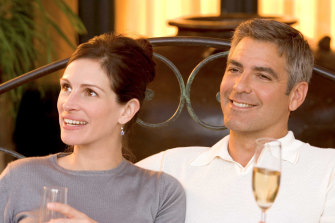 Clooney and Roberts have worked together before in the Ocean’s Eleven movies and the Jodie Foster-directed Money Monster.

This time they will play a divorced couple who travel to Bali to stop their daughter making the same mistake they think they made 25 years ago.

Federal Minister for Communication and the Arts Paul Fletcher said Ticket To Ride would be made with a $6.4 million grant under the government’s location incentive program.

It will be produced by Tim Bevan and Eric Fellner of Working Title Films, the successful British production company behind such hit romantic comedies as Four Weddings and a Funeral, Love Actually, Notting Hill and Bridget Jones’ Diary as well as Billy Elliot, Fargo and The Big Lebowski.

The producers include Sarah Harvey (In Bruges) and Deb Balderstone (Palm Beach) as well as Clooney and partner Grant Heslov for Hollywood studio Universal.

“We have worked in Australia before and found the local crews to be extremely professional,” Bevan said.

“We are looking forward to collaborating once again on this exciting project.”

Mr Fletcher said the government had distributed more than $216 million under the location incentive program to attract 22 productions to Australia.

He expected the movie to inject $47 million in expenditure into the Australian economy and create more than 270 jobs for local cast and crew.