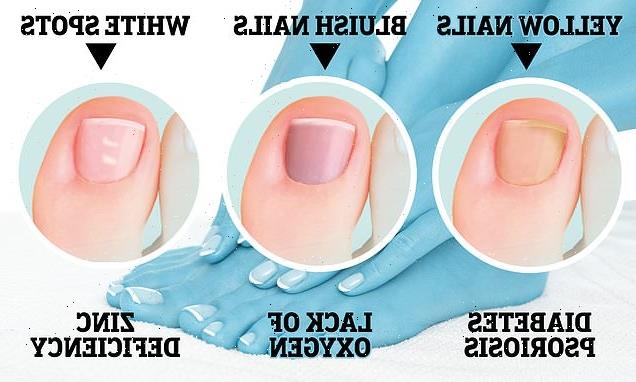 What do YOUR toenails say about your health? Podiatrist reveals the subtle signs you need to look out for – from a yellow tinge indicating diabetes to pale nails linked to anaemia

A podiatrist has revealed how changes in your toenails can signal underlying health problems.

Dina Gohil, a podiatrist and MD at UK-based firm DG Podiatrist, has revealed common symptoms, and the biggest potential health issues to look out for.

Among the explanations include pale nails suggesting poor circulation, anaemia or malnutrition, and white spots being associated with zinc deficiency or fungal infection.

Speaking exclusively to FEMAIL, has offered a comprehensive guide to show what your toenail problems may be revealing about your wellbeing… 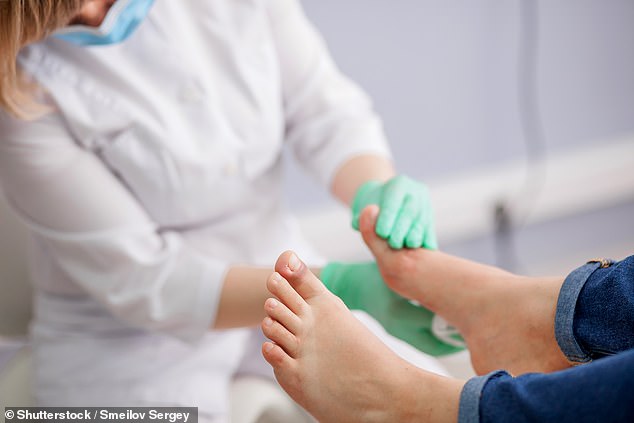 Dina Gohil, Podiatrist & MD at DG Podiatrist and Ambassador for CCS Foot Care, who is from the UK, has revealed common symptoms, and the biggest potential health issues to look out for. Pictured, stock image 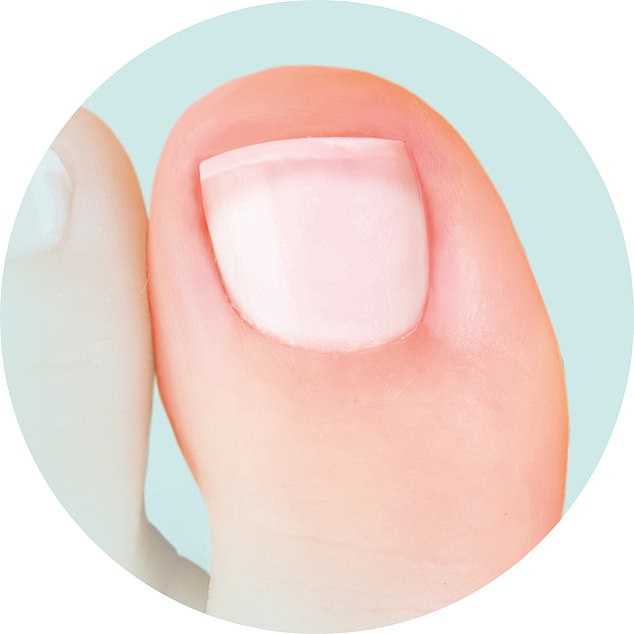 According to Dina, pale nails (pictured) can sometimes be a sign of poor circulation, anaemia or malnutrition

Dina, who is an ambassador for CCS Foot Care, explains that in the first instance, pale nails are a common sign of ageing – adding if you are over 60 they are unlikely to be cause for concern.

However, she goes on to warn that they can sometimes be indicative of poor circulation, anaemia or malnutrition.

‘They can also be caused by malfunctions in the liver or heart, or poor nutrition, so it is important to get this issue checked out,’ she says. ‘If your nails are mostly white with a narrow pink band at the tip, it could be a condition called Terry’s nails.’

‘This can be due to ageing but it could also indicate diabetes and kidney, liver or lung disease.’

Can signal: Fungal nails, diabetes, psoriasis, or even thyroid disorders 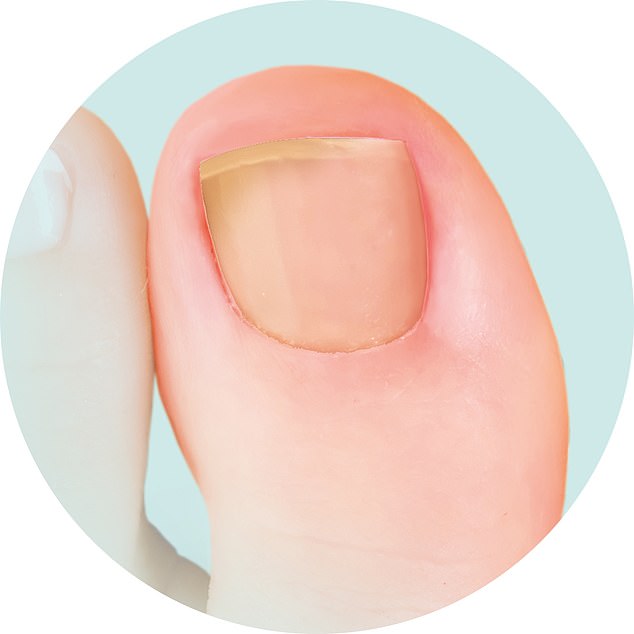 Yellow nails can be a sign of fungal nails, diabetes, psoriasis, or even thyroid disorders, the podiatrist explained

When it comes to yellow nails, sometimes the stain can simply be from eating food with ingredients such as turmeric, smoking, excessive use of nail polish or leaving nail polish on for too long, according to Dina.

‘In this scenario, your nails should grow clear again, but you can also use natural treatments such as tea tree oil and vitamin E to tackle any infection,’ she explains.

However, the podiatrist says that if it continues to get worse, it could be a sign of fungal nails, diabetes, psoriasis, or even thyroid disorders.

‘If left untreated, the nails can continue to deteriorate and become thick and crumble off,’ she notes. ‘If your nails remain yellow despite repeated treatment, this could be a sign of something more serious such as skin cancer.’

Dina goes on to add there is also a rare condition called ‘Yellow Nail Syndrome,’ which she explains ‘manifests in constantly yellow nails and respiratory or lymphatic problems.’

‘This can be caused by a variety of factors including rheumatoid arthritis, fluid buildup between the lungs and chest cavity and respiratory illnesses.’

Can signal: Lack of oxygen, occupational hazard or medication 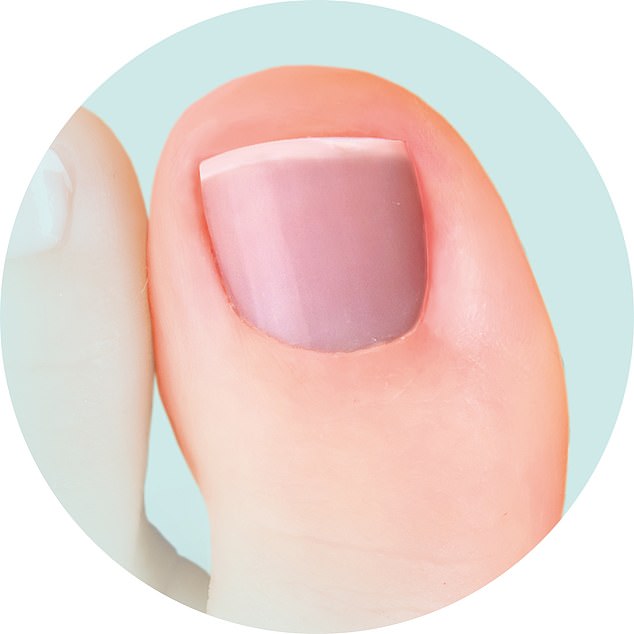 Dina explained that blue nails (pictured) are often an indicator that there’s not enough oxygen getting to them, which is a condition called Cyanosis

– Avoid biting and tearing your nails and avoid pulling off hangnails

– Use good nail clippers or sharp nail scissors, and make sure to wash these tools frequently

– Try to keep your nails clean and dry at all times

– Trim your nails straight, round the tips gently and leave the cuticles visible

– Use a nail moisturiser regularly

– Only visiting certified nail technicians for professional manicures and pedicures

– Pay attention to any changes or problems in your nails, and always seek professional help if concerned

The expert explains how nails can appear blue for several reasons, but notes that many may be unaware that it is actually the nail bed beneath that is blue rather than the nail itself.

She goes on to say how the nail bed does not contain any skin pigment, meaning any bluish appearance is caused by ‘something else.’

Dina says blue nails are often an indicator that there’s not enough oxygen getting to them, which is a condition called Cyanosis.

‘This is a lack of oxygen in the red blood cells causing the skin underneath your nails and other body parts including the feet, lips and mucous membranes to appear blue/purple,’ she explains.

‘This has several causes including cold temperature exposure, abnormally high hemoglobin levels, an underlying health problem such as asthma or COPD or your body’s inability to deliver enough oxygen to the area.’

She adds that people with pneumonia can demonstrate an extreme example of this.

But that’s not all. Dina also tells how blue nails can be a result of occupational hazard.

‘Mechanics working with oxalic acid, those using metal cleaners, paint removers, those who manufacture inks and dyes and those who work with silver are at increased risk of developing blue nails,’ she says. ‘Those with HIV can also develop blue nails – it can be a sign of the infection itself or as a result of certain antiretroviral medications.’

‘Other medications which can cause your nails to develop a bluish hue are antimalarial drugs, drugs used to tackle psychosis and amiodarone which is used to regulate the heartbeat.’ 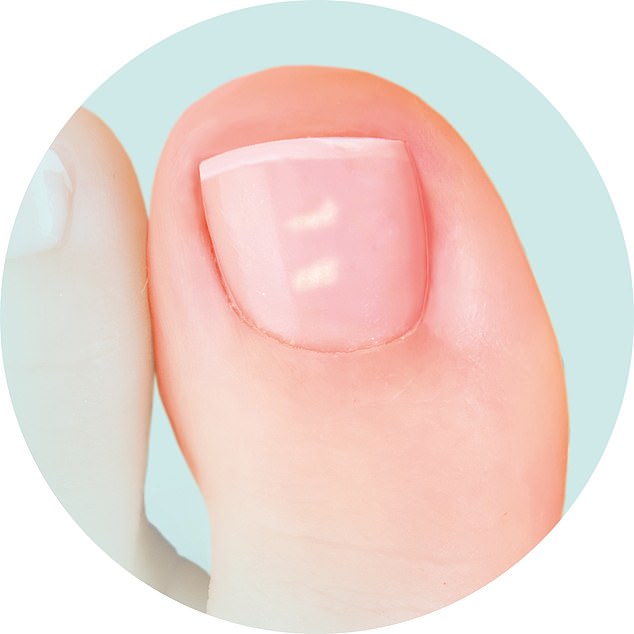 According to Dina, white spots on the nails are common and normally harmless.

‘They can be down to injury or micro trauma to the nail such as hitting it against a hard surface or bending but not breaking the nail,’ she says.

‘This is not a cause for alarm in healthy individuals. Simply wait for the spot to grow out and then clip it off.’

The expert notes that white spots can also be a hereditary condition, adding that in more serious cases, white spots on nails are associated with a zinc deficiency or fungal infection, as well as poor health and nutritional deficiencies.

She continues: ‘In very rare cases, people’s nails can be entirely white (total leukonychia). This can sometimes indicate an underlying health problem but not always. It is best to seek treatment from a medical professional in this instance.’ 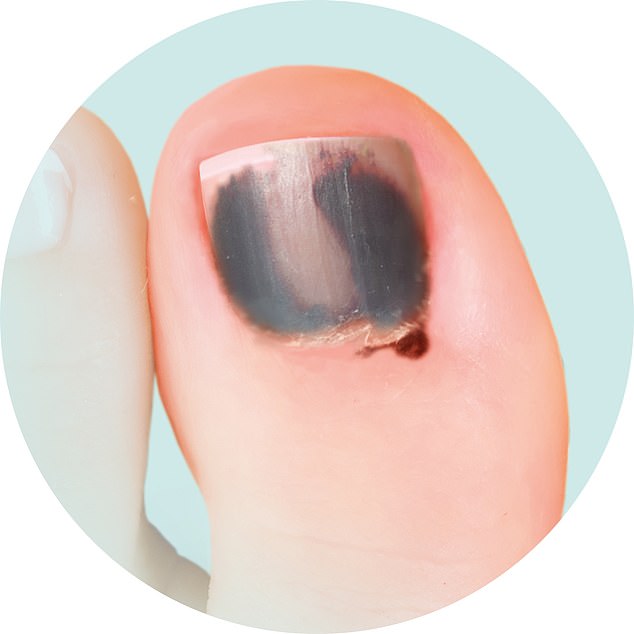 Dina goes on to say that black nails are also linked to trauma of the nails, with the blood vessels in the nail bed breaking and showing on the nail bed under the nail.

‘The bleeding underneath means that the nail appears black,’ the podiatrist explains. ‘This will normally grow out on its own, but if it does not then it may be a sign of a more serious issue.’

She goes on to note that in other cases, it can be signs of anaemia, diabetes, kidney disease or heart disease.

‘Untreated fungal nails can sometimes cause black toenails due to a buildup of debris,’ warns Dina. ‘Toenails are particularly vulnerable to fungal infections because they thrive on moist, warm environments. So, if you notice you have white or yellow nails, get these checked by a podiatrist before they turn black.’

Dina notes that the most serious cause of black nails is Melanoma – the most severe type of skin cancer.

‘This can manifest as a dark brown/black misshapen spot underneath the nail bed,’ she explains. ‘Seek the help of a medical professional if you encounter this symptom.’