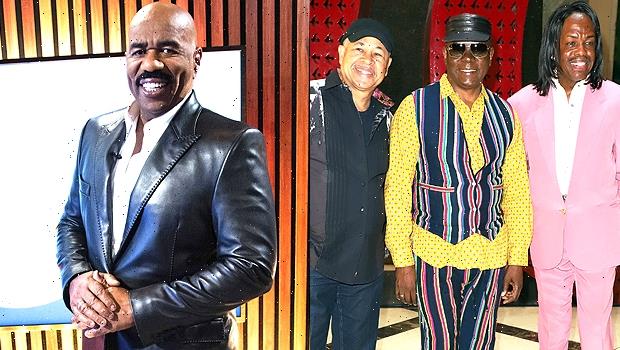 Earth, Wind & Fire have nothing but love for Steve Harvey. The iconic band, famous for disco classics like “September,” came to the comedian’s defense after he hosted their April 4 Versuz battle with The Isley Brothers. Steve, 64, was accused on Twitter of hijacking the Verzuz battle with his non-stop storytelling.

But Verdine White, a founding member of EWF, told HollywoodLife EXCLUSIVELY that the band was more than happy to have Steve take the mic. “We needed a rah rah man and he’s the rah rah man, so Steve did his thing. He did his thing, you know, and it was all in love,” the Grammy award winner explained.

“A new generation of people heard our music, songs they had never heard before. [The Versuz] was great for us and I’m sure [EWF percussionist] Ralph [Johnson] agrees, it was fantastic,” he continued, while promoting the band’s headlining performance at the 28th annual Race to Erase MS gala, which will be held at the famous Rose Bowl Stadium in Pasadena, CA on June 4.

Earth, Wind & Fire will headline the socially distanced outdoor celebration and will perform a full set to help raise funds and awareness for multiple sclerosis, a life-altering autoimmune disease. The drive-in will also feature a Spring/Summer 2021 runway show from fashion brand alice + olivia by Stacey Bendet.

Race to Erase MS founder Nancy Davis, who was diagnosed with MS in 1993, is dedicated to funding the treatment and ultimate cure of multiple sclerosis. She has hosted a star studded fundraiser gala for nearly three decades and she couldn’t contain her excitement when talking about this year’s celebration.

“I’m absolutely thrilled that we have Earth, Wind and Fire [performing.] I can’t think of a more exciting band,” she told HollywoodLife EXCLUSIVELY. “They’re the top of my list of any band I would want to have performing…[It will be] the most incredible memorable moment…They’re the best. The best of the best.”

Nancy’s excitement for the upcoming performance was matched by the band’s lead singer Philip Bailey. “This will be the first time that we’ve performed for over a year-and-a-half [because of the COVID-19 pandemic], so we’re looking forward to it,” he enthused.

Tickets for the June 4 event can still be purchased on-line.