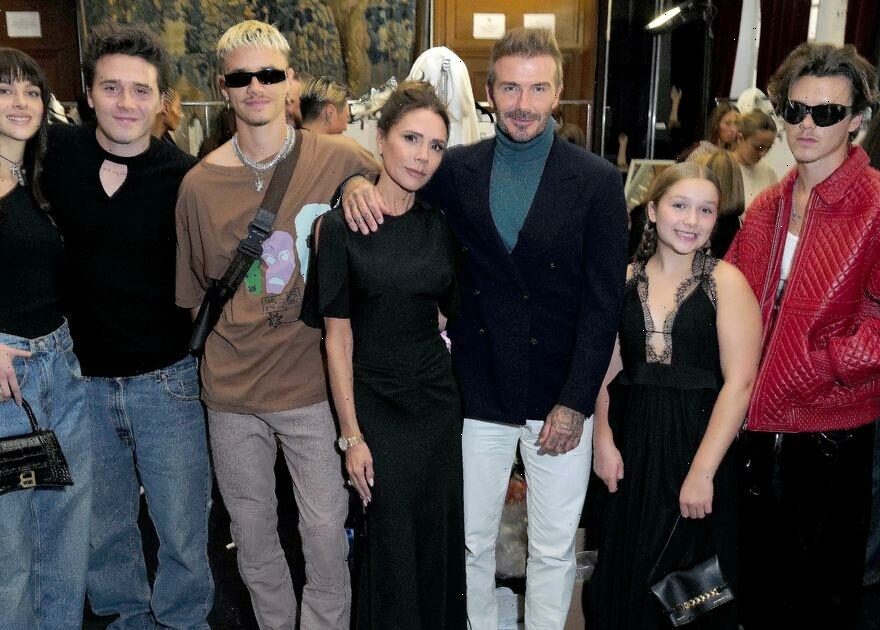 It was a first forVictoriaas her eponymous label had its first everrunway showand in true family spirit she was supported by her husband and family.

David, 47, was a proud husband as he cheered for his wife along with the couple's three youngest children,Romeo, 20,Cruz, 17, and 11 year oldHarper.

However, perhaps the most memorable moment from the show, that took place on 30 September, was that it provided the family a chance to reunite with David and Victoria's eldest sonBrooklyn, 23, and his wifeNicola, 27.

Brooklyn and Nicola's appearance at the show came as a surprise as many were uncertain if they would show as rumours of a rift between Nicola and Victoria have been rife for months following the Peltz-Beckham nuptials in May.

Victoria and David are yet to speak publicly on the matter, and it's not thought that they will as they have a "golden rule" on remaining silent on issues in public.

Elsewhere, as the fashion show came to an end, an emotional Victoria, 48, took to the runway and seemed overcome with emotion as she broke down in tears.

Victoria sported a flowing black dress and matching heeled boots as she made her way past the crowd, before stopping by her husband for a sweet moment as they shared a hug.

As she was applauded by her many family and friends in the audience, the former Spice Girl covered her face in her hands as she cried.

After the show,David led his family in posting congratulatory messageson Instagram: “PARIS BABY. Today we celebrate YOU @victoriabeckham.

“You have worked so hard to get to this moment so enjoy it but remember it’s only the beginning for you & team VB. We are so proud of you.” Brooklyn also congratulated his mum in his Instagram story, reposting the picture of himself, his wife, dad and siblings, sitting with Vogue editors Edward Enninful and Anna Wintour.

His wife, Nicola also praised Victoria for a "beautiful" show.

For the coveted week in France’s capital, the Beckham family all put their best fashion foot forward including anadorable ensemble worn by Harper.

Harper held her father’s hand as she stepped out in a stylish black maxi dress, but dressed the look down with a pair of black-and-white Nike trainers and her brunette hair was in plaits.

Following the show, Victoria shared a sweet clip of Harper on her Instagram story, in which she stood next to brothers Romeo and Cruz.

The youngster gave a sweet message to her, saying: “Hi mummy, congratulations, I hope you have the best day,” before blowing a kiss to the camera.