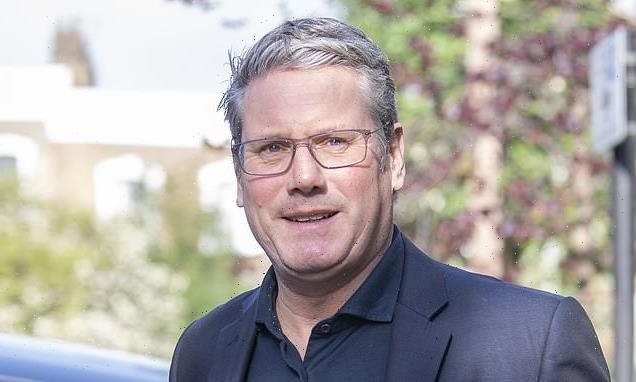 DAN HODGES: This is Saint Keir’s John Major moment… now he’s painted a target on the back of every Labour MP

As a matter of principle for me, it’s very important we have honour, integrity and accountability in politics,’ Sir Keir Starmer intoned last week.

Pledging to step down if he’s fined over the Beergate scandal, he added: ‘It’s about who I am, the integrity that I have and the integrity I want to see in politics.’

Seven days ago, Starmer was just your ordinary run-of-the mill Knight of the Realm, Privy Counsellor and Leader of Her Majesty’s Opposition.

Then this paper published the internal memo that revealed his story about that fateful night in Durham had been one huge fabrication.

At which point – in a continuing attempt to keep the police, press and public at arm’s length from the truth – Sir Keir anointed himself St Keir.

According to his supporters, the man who had just been placed under police investigation by a six-strong squad from Durham Constabulary was now a paragon of all that was right and good and true in British politics. 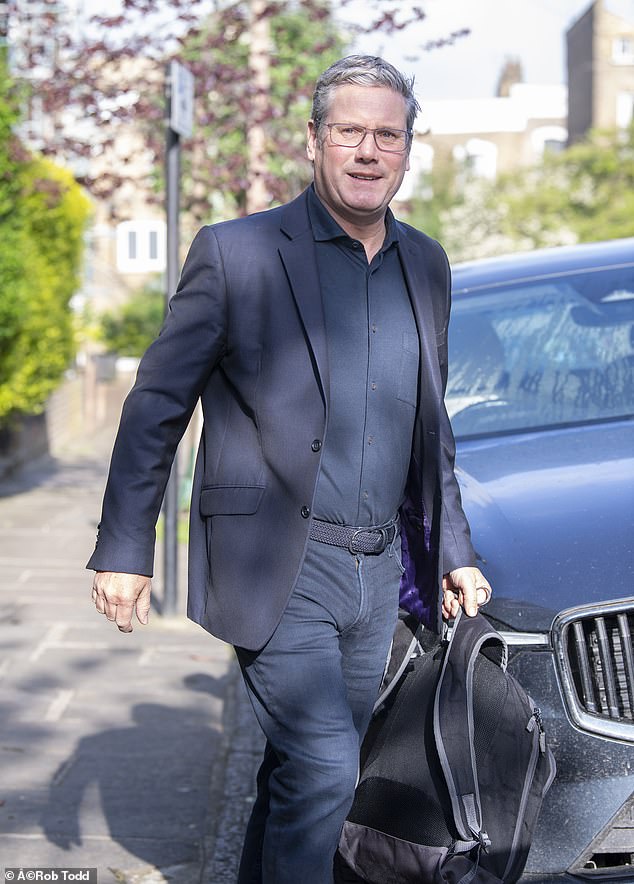 Keir Starmer is trying to pose as a paragon of virtue, and his disciples are only too happy to lobby for his canonisation, writes Dan Hodges

‘Keir Starmer has shown he’s a person of decency and integrity throughout his career in law and politics – and he showed it again today,’ swooned Ed Miliband.

First, despite the fanatical fawning of the Keir cultists swarming across social media, the pledge to quitwas not a product of high principle, but opportunism.

St Keir knew full well that after demanding Boris’s resignation when the Met began investigating the PM’s own lockdown rule-breaking, his position would be indefensible if he received the same sanction.

So he simply tried to make a virtue out of necessity.

Then, having done so, he compounded his opportunism with naked cynicism.

But again, he doesn’t actually mean it. St Keir’s pledge to resign is very legalistically drawn.

It doesn’t actually apply to the breaking of Covid rules, but only to circumstances where he’s formally presented with a fixed penalty notice.

That’s what they did in the case of Dom Cummings’ trip to Barnard Castle, an incident that saw Starmer demand his sacking, and accuse the Prime Minister of treating the public with contempt.

So St Keir is trying to pose as a paragon of virtue, and his disciples are only too happy to lobby for his canonisation.

But the reality is that he’s actually asking to be held to a lower standard of probity than he’s demanded of others.

Which won’t bother him and his supporters one iota if this hypocritical posturing pays off. But will it? 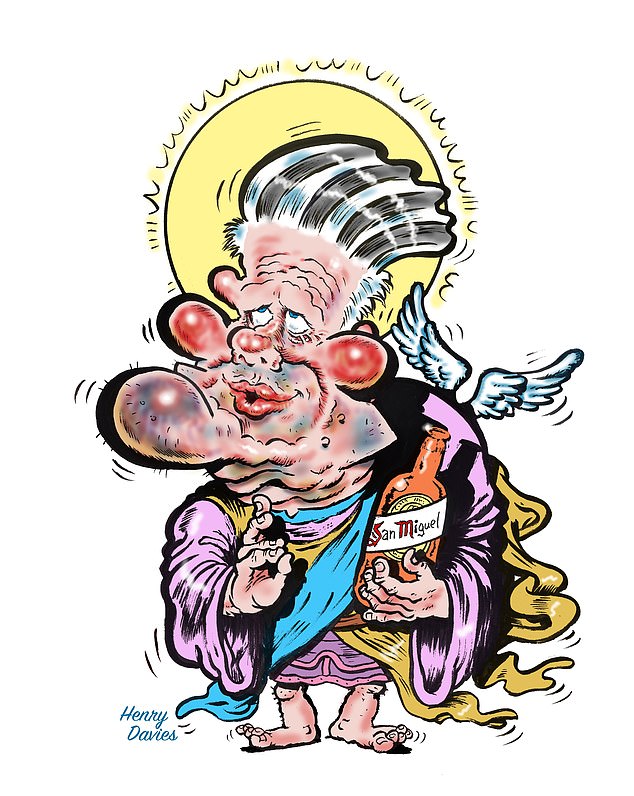 Sir Keir has anointed himself St Keir in a continuing attempt to keep the police, press and public at arm’s length from the truth, writes Dan Hodges

In the immediate aftermath of Monday’s speech, the consensus was that while Starmer had taken a significant gamble, the perception of him acting honourably would play well with the voters. And it might. But any benefit is likely to prove short-lived.

One reason is that by raising the prospect of his resignation, St Keir has broken one of the cardinal rules – never concede your own political mortality.

Over the past few days, members of his Shadow Cabinet have been trotting across the airwaves, offering support.

But with the possibility of a leadership election now a mere five or six weeks away, prospective challengers have no option but to begin mobilising.

And the extent to which Starmer’s resignation pledge is already eroding his authority was underlined by the downbeat reaction from the Labour benches to his lacklustre contribution to the Queen’s Speech debate.

A second problem is one that he and his supporters seem strangely blasé about – namely that Durham police could just pull the rug out from under his self-righteous grandstanding.

The word from Team Starmer is that they are confident he will avoid a fine when the investigation is concluded.

But that same confidence was emanating from Team Boris right up until the point he and Rishi Sunak were handed fixed penalty notices for spending eight minutes in the same room as a cake.

The police are devoting significant resources to the investigation – resources they will need to justify once it concludes.

They will have seen the briefing from Starmer’s allies that one reason for issuing the resignation pledge was to directly put pressure on Durham detectives.

And as we’ve seen, even if they opt for a Cummings-style slap on the wrist, St Keir’s demand for the No 10 adviser’s scalp will make his own position untenable.

And there is one final problem. Starmer has set the bar of morality for himself and his party too high.

Watching his speech, in which he extolled – with a bewildering lack of self-awareness – his own virtues, I was reminded of the speech of another leader.

Back in 1993, ‘honest’ John Major framed himself as the proud defender of traditional British values.

‘It is time to return to those old core values, time to get back to basics,’ he promised.

A year later, his and his party’s reputation had been torn apart – shredded by scandal and mired in sleaze. 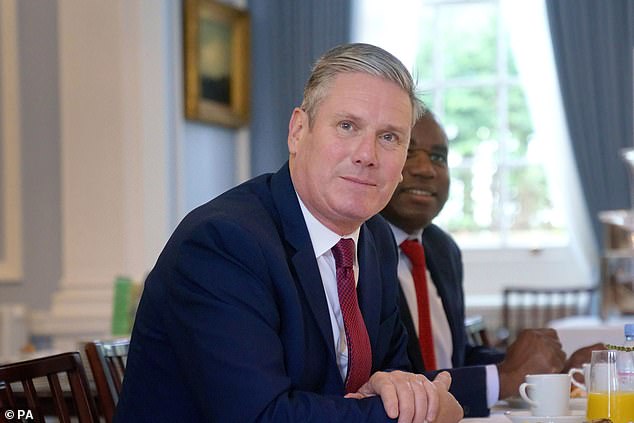 Even if Durham Police opt for a Cummings-style slap on the wrist, St Keir’s demand for the No 10 adviser’s scalp will make his own position untenable, writes Dan Hodges

By politicising virtue, Major had unwittingly painted a target on his own back, and the back of every single one of his Ministers and MPs.

Now – with his belated, holier-than-though response to Beergate – Starmer has done the same.

To my eyes he is essentially a decent man. But a man is all he is. Contrary to what he and his followers believe, Keir Starmer isn’t Labour’s Thomas More.

And to prove it, all that’s required is to map his words against his record.

But this is the same St Keir who won a Labour leadership election by unveiling ‘My Pledges To You’, which included defending free movement, introducing a Prevention of Military Intervention Act, renationalising rail, mail, energy and water, and abolishing the House of Lords.

Policies that for now he claims to no longer support.

‘It’s very important we have integrity,’ Starmer said. But again, this is the same St Keir who served in the Shadow Cabinet under Jeremy Corbyn, and campaigned to make him Prime Minister.

But asked last month by a Jewish newspaper if he would call Corbyn a ‘friend’, he replied: ‘No.’

Yet this is the same St Keir who spent most of the past year evading and distorting and dissembling how he ate a simple curry and drank a single beer.

Who clung feverishly to his deception even after the police came knocking. And who still hasn’t come clean even after witness statements and his own internal memos have rubbished his story.

As he concluded his pious address to the nation, St Keir said this. ‘They [the British people] deserve politicians who put the country first rather than themselves.’

But this whole farrago has arisen because Starmer has been thinking only about himself.

His politically motivated call for resignations before the police had concluded their investigations.

His decision to keep Partygate at the heart of his strategy, even when Shadow Cabinet colleagues were urging him to move on to other issues.

His arrogant dismissal of the initial Beergate allegations. His attempt to cover up the truth when the scandal escalated.

And the final, reckless, gamble to dig himself out of the hole his self-serving piety has dug.

‘It’s about who I am,’ Labour’s leader said last week.