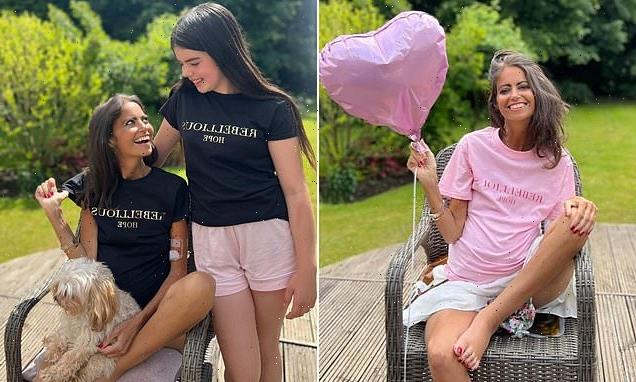 ‘Rebellious Hope has got me through the last five years’: Dame Deborah James launches two new slogan t-shirts to raise money for her BowelBabe fund and says designing them has ‘kept her going’

Dame Deborah James has launched two ‘Rebellious Hope’ t-shirts – saying that the slogan has ‘truly what has got [her] through the last 5 years’.

The new shirts are an addition to the collection the 40-year-old recently launched  with InTheStyle to raise money for the BowelBabe fund, which she established to raise awareness of bowel cancer as well as money to fund research into the disease.

Deborah, who has been living with stage four bowel cancer since she was diagnosed in December 2016, recently announced she is receiving end-of-life care at her parents’ home in Woking.

Since then, the BowelBabe fund has hit more than £6.5 million, with more than £650,000 raised from her InTheStyle collection alone, which she said has made her ‘so so happy and thankful’. 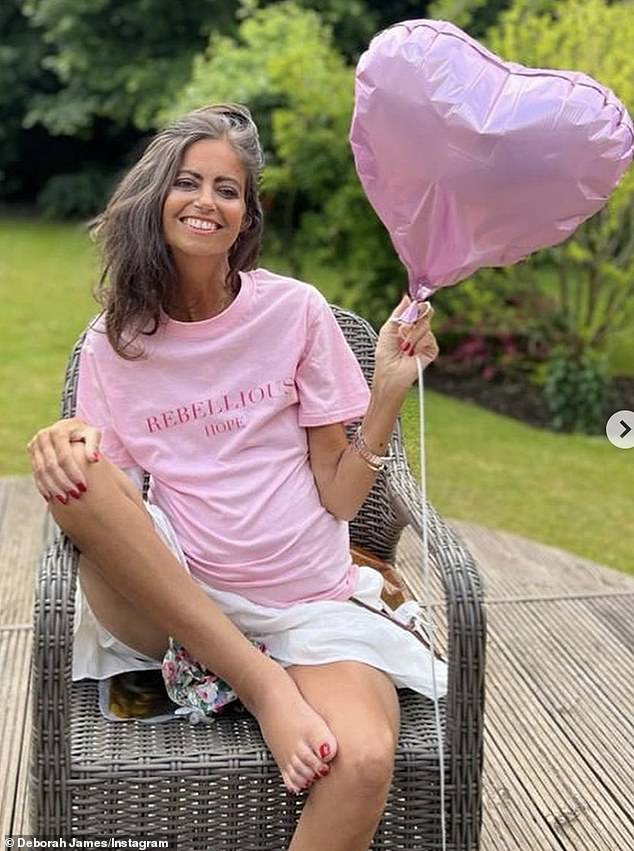 40-year-old Deborah James, who is currently receiving end-of-life care at her parents’ home in Woking, has announced the launch of this new ‘Rebellious Hope’ t-shirt today 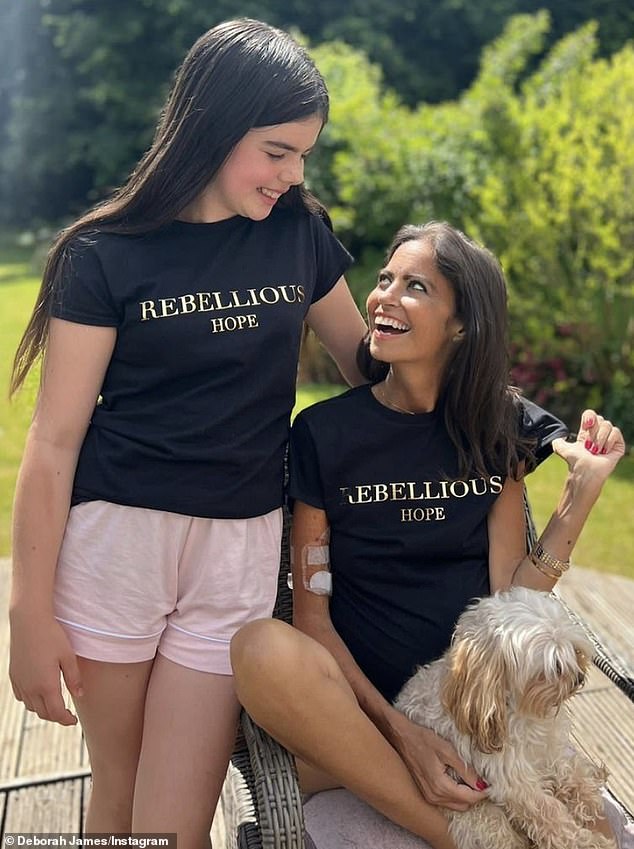 The campaigner, pictured here with her daughter Eloise, says that designing her clothing lime has been keeping her going

Posting about the two new shirts on Instagram, Dame Deborah wrote: ‘ Creating these have really kept me going the last few days and I’m so proud of them.

‘I talk about this quote a lot ‘Rebellious Hope’ – it’s truly what has got me through the last 5 years and I have been blow away by just how many of you have been supporting and wearing my t-shirt design.’

She added: ‘I’ve been up and down over the last couple of days being honest but where I’ve had the strength I’ve been discussing ideas and we have decided to do these two final designs at your request and it’s fair to say I absolutely LOVE them!’

Describing the two shirts, she said the black is a ‘fitted style with gold foil’, and the pink one is a ‘standard fit’ style, which is less dressy.

Deborah added that she had shared the Instagram post later than planned as she was having ‘one of those days…sadly like a lot of my days now’.

She concluded: ‘I’ve only just been able to be awake enough to do this! Argh dying is hard you know!! Thank you for your continued support, and kind messages.’

Today’s launch follows the main collection’s release on May 26th.

Announcing the launch on Instagram that day, Deborah shared a video, in which she spoke about designing the range, a time she described as a ‘hybrid’ life,  working between home and the hospital.

But she said: ‘We made it, we got it done. I was enjoying it. It was kind of bringing me to life, it was giving me something else to think about.’ 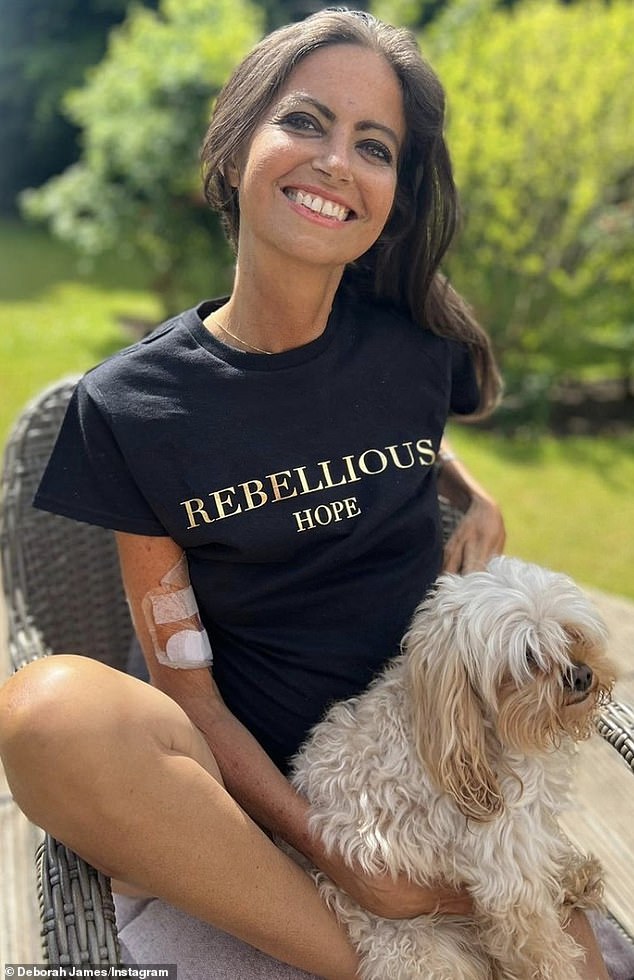 Designing the clothing line has been something ‘different to cancer’, according to Deborah, who credits creating the range with bringing her some happiness 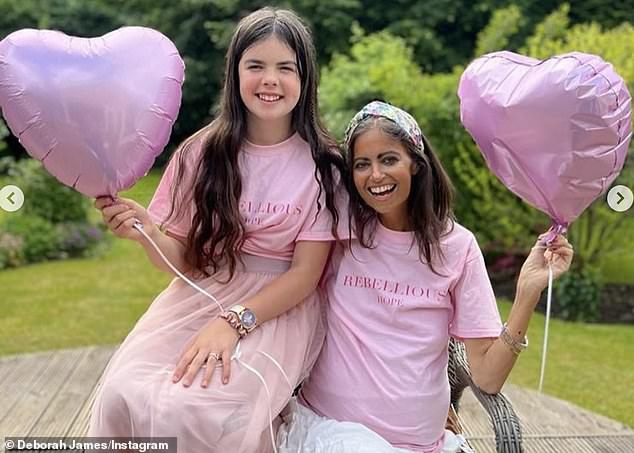 The 40-year-old, pictured here with her daughter Eloise, is currently receiving end of life hospice care at her parents’ Woking home so her children don’t have to see her final days in their family home

She added: ‘The reason that I really wanted to do it is because it is something totally different to cancer.

‘I love fashion. Anybody that has followed me for years and years knows I love my dresses’, she said.

‘I am always hunting for the best prints. I love clothes, it makes me happy.’

The 40-year-old said she ‘really hopes’ everyone loves the collection as much as she loved designing it and that the clothing brings joy to people and makes them feel great when they put them on.

Rounding off her video, she revealed that she will be wearing a different dress from the collection from now until she dies.

She acknowledged that it sounds ‘slightly morbid’ but she is really enjoying it.

Her announcement of her collection comes after she recently told The Sun that she was ‘scared to fall asleep’ because she does not know how long she has got left.

She added she had felt a ‘deep love’ from her family, saying: ‘I think my family are knackered, they have all been incredible – going above and beyond to look after me and nurse me.’

Deborah was diagnosed with stage four bowel cancer in December 2016, and was told early on that she might not live beyond five years – a milestone that passed in the autumn of 2021.

She shared an Instagram post earlier this month revealing that ‘nobody knows how long she has left’.

She wrote: ‘The message I never wanted to write. We have tried everything, but my body simply isn’t playing ball.

‘My active care has stopped and I am now moved to hospice at home care, with my incredible family all around me and the focus is on making sure I’m not in pain and spending time with them.’

She is receiving hospice care at her parents’ home in Woking, to spare her children the difficult memories of her spending her final days at the family home in London.

In December 2016, the West London mother-of-two, a deputy head, was diagnosed ‘late’ with incurable bowel cancer

After sharing her experiences on living with the disease on social media, Deborah became known as the ‘Bowel Babe’

In 2018, she became one of three presenters on Radio 5 Live’s You, Me and the Big C, which was conceived by her late co-host Rachael Bland

On September 5th 2018, Welsh journalist and presenter Bland, diagnosed with terminal breast cancer, died at the age of 40

Deborah and her co-host Lauren Mahon continue to present the show, with Steve Bland, Rachael’s husband, joining the duo

On social media and in her column for the Sun newspaper, Deborah has documented the many chemo, radiotherapy sessions and surgery she’s had since

During her treatment, Deborah told followers on Instagram ‘By my general lack of being on here (dancing!), that Things have moved (in the wrong direction) very quickly cancer wise.’

In 2019, she had a procedure known as CyberKnife, a highly targeted form of radiotherapy to attack an inoperable lymph node close to her liver

The pandemic’s impact on cancer services saw her campaign for care to continue as normal and, earlier this year, she launched the ITV’s Lorraine’s ‘No Butts’ campaign, raising awareness on bowel cancer symptoms

Since last year, she has been taking new experimental drugs as part of a trial after her oncology team gave her the green light to do so

August, Deborah revealed that scans she’s had in recent days have revealed her cancer has gone in the ‘wrong direction very quickly’

By October 18, the mother-of-two told her followers her chemotherapy is working

Days later, she was rushed to A&E with ‘spiking 40 degree temperatures’

In November, she reveals she is unable to walk for more than 20 minutes and remains ‘very weak’

By December, Deborah said she was ‘not sure what her options were’ after her liver stent ‘stopped working’

In January, she had five operations in 10 days after nearly dying in an acute medical emergency

March 14, the mother-of-two is back in hospital as an in-patient after suffering from septic infection

In April, she concerned fans with snaps after suffering ‘a rough few days’

April 14, the mother-of-two tells fans she has been discharged from hospital but calls the situation ‘very tough’

April 27, she tells Lorraine that she has spent ’80 per cent’ of the year in hospital

May 9 – Deborah announces she has moved to hospice care