The Morrison government is under pressure from within to increase the caps on the number of Australians allowed back into the country after Emirates abruptly suspended flights and cut off a major option for stranded travellers trying to get home.

The government is now scrambling to arrange special rescue flights and will redistribute Emirates' seats to other foreign airlines, with acting foreign minister Simon Birmingham promising on Saturday there would be "no loss of capacity into Australia".

"There are still pathways into Australia through other commercial carriers," Senator Birmingham said. "The capacity that Emirates had within the cap to bring Australians home will now be reallocated to those other airlines." 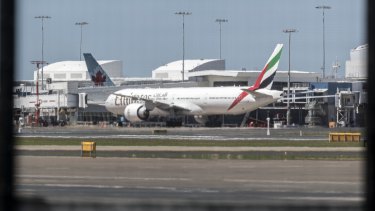 Emirates made the decision to pull out of Australia. Credit:Brook Mitchell

"The concern of new strains having an impact on Australia is entirely understandable, but if the February start date can be brought forward that would be a positive outcome," he said. "That requires states to speed up their processes of reviewing hotel quarantine systems to meet the requirements to handle the new UK and other (coronavirus) strains."

Higgins Liberal MP Katie Allen said: 'There's no doubt we want to see an increase in quarantine caps. I would support that."

However, she added: "The tricky thing is we have to balance that with keeping Australians safe. I think some states have taken a heavier burden than others. I'm not privy to the reasons behind that, but it would be good to see all them put their shoulders to the wheel."

Liberal MP for Wentworth Dave Sharma, a previous critic of the caps, said the reduction was necessary for health reasons but was "undoubtedly causing additional hardship" for stranded Australians.

"I feel for these people and their loved ones back in Australia, and it's important we do all we can to ensure they can return home," he said.

Senator Birmingham conceded the reduced caps had "made it more challenging" for Australians to come home but said it was necessary to protect against the virulent new strains of COVID-19.

Emirates is expected to continue flights to Perth but cancelled all other flights to Australia. It had been operating daily flights to Sydney and Melbourne, and five flights a week to Brisbane. 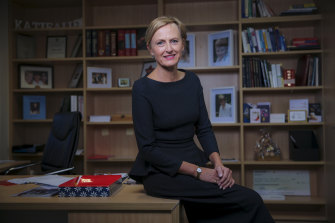 Federal member for Higgins, Katie Allen, said she would like to see the cap lifted. Credit:Wayne Taylor

A spokesman for Japan Airlines said the carrier would abide by the reduced cap for January but did not rule out future flight reductions. "At this point, we will review our plans for February and make an announcement for future scheduling shortly," he said.

A Singapore Airlines spokesman said the temporary reduction to Australia's international arrival caps "adds to the already challenging environment" but the airline would continue to work with authorities to maximise arrivals under the cap.

Stephen Blanks, a spokesman for the NSW Council of Civil Liberties, said it was extraordinary that Australian citizens were unable to return to Australia because of quotas on the number of arrivals.

On Friday night the Department of Foreign Affairs and Trade confirmed about 38,000 people were still registered with DFAT as being overseas and wanting to return. About 5000 were considered to be "vulnerable". 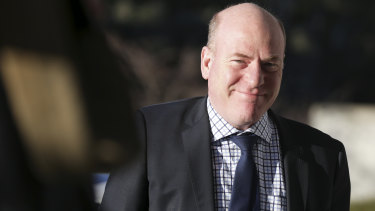 Liberal MP Trent Zimmerman says the cap was having an impact. Credit:Alex Ellinghausen

"He has refused to take responsibility," she said. "He has left it to the states and now we have 40,000 Australians stranded overseas."

Victoria's Premier Daniel Andrews yesterday shrugged off the Emirates decision, saying it had been made for "operational reasons" and he didn't know if it had "anything to do with" the reduced caps.

Independent Warringah MP Zali Steggall said her office had been flooded by inquiries from worried constituents and called for an end to sudden announcements from governments and airlines.

"COVID-19 has been in our community for a year and we are not seeing a sustainable approach to either international or domestic travel," she said.