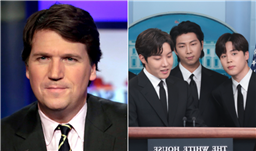 Tucker Carlson has made an enemy out of the BTS Army after he spoke out against the K-pop group’s May 31 appearance at the White House. The group addressed the press and spoke with President Joe Biden about Asian inclusion and representation to mark the final day of Asian American and Pacific Islanders Heritage Month.

“Things have gotten very bad for Joe Biden, both public-facing and internally,” Carlson told viewers of his eponymous Fox News show. “What are they doing about it? Well, they broke glass in case of emergency and invited a Korean pop group to speak at the White House today.”

Carlson threw to a clip of BTS member RM addressing press at the White House. “Hi, we’re BTS and it is a great honor to be invited to the White House today to discuss the important issues of anti-Asian hate crimes, Asian inclusion and diversity,” the singer said.

“Yeah, so we got a Korean pop group to discuss anti-Asian hate crimes in the United States. Okay. Good job, guys,” Carlson quipped.

The BTS army was quick to push back against Carlson on social media, flooding the social media platform with memes and calls for Carlson’s head. As one Twitter user noted, “So it will be K-Pop fans who finally bring [Tucker Carlson] down.”

Each member of BTS took turns speaking in Korean at the White House while talking to the press, with Jin and Jimin expressing how honored they were to be standing for their community. Jimin said, “We were devastated by the recent surge of hate crimes…to put a stop to this and support the cause, we’d like to take this opportunity to [lend our voices].”

J Hope added, “We are here today thanks to our Army — our fans worldwide — who have different nationalities and cultures and use different languages. We are truly and always grateful.”

“We hope today is one step forward to respecting and understanding each and everyone as a valuable person,” V added.

As Variety reported, over a quarter-million people tuned in to see the band speak on the White House’s YouTube livestream.