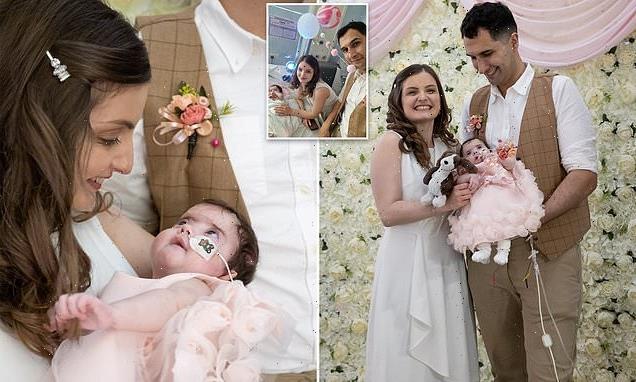 This is the moment a baby was bridesmaid for her parents’ wedding – next to her hospital bed where she is being treated.

Karim, 38, and Louise Rezaie celebrated their big day with their six-month-old daughter Layla who is undergoing treatment.

Layla was born on Christmas Day but has been patient at hospital ever since due to a rare genetic condition.

The couple, from Torquay, Devon, tied the knot on May 21 at Bristol Children’s Hospital. 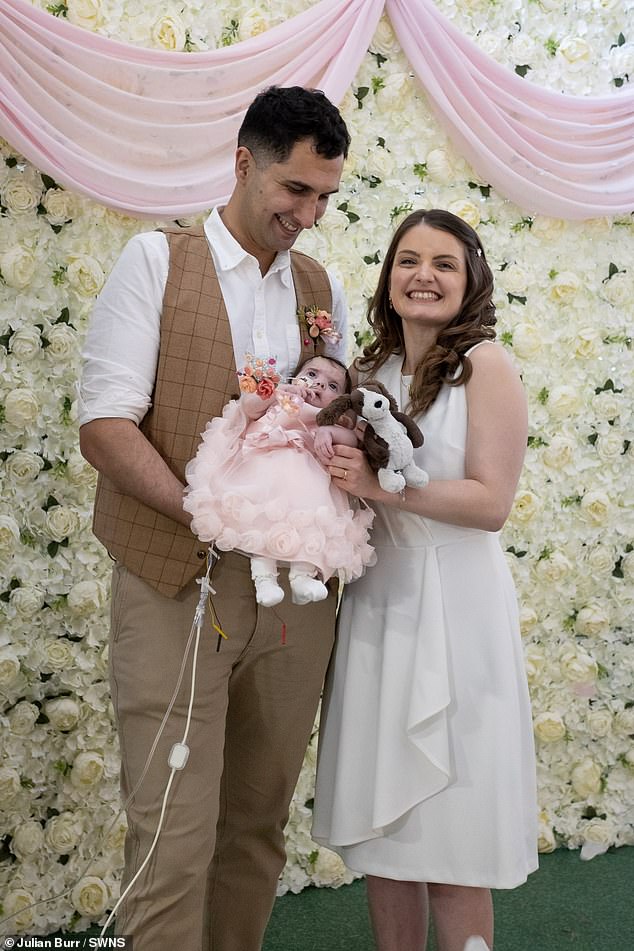 Karim Rezaie, 38, psychological therapist and Louise Rezaie, 30, psychological well-being practitioner – on their wedding day with their baby daughter Layla as the bridesmaid at Bristol Children’s Hospital. 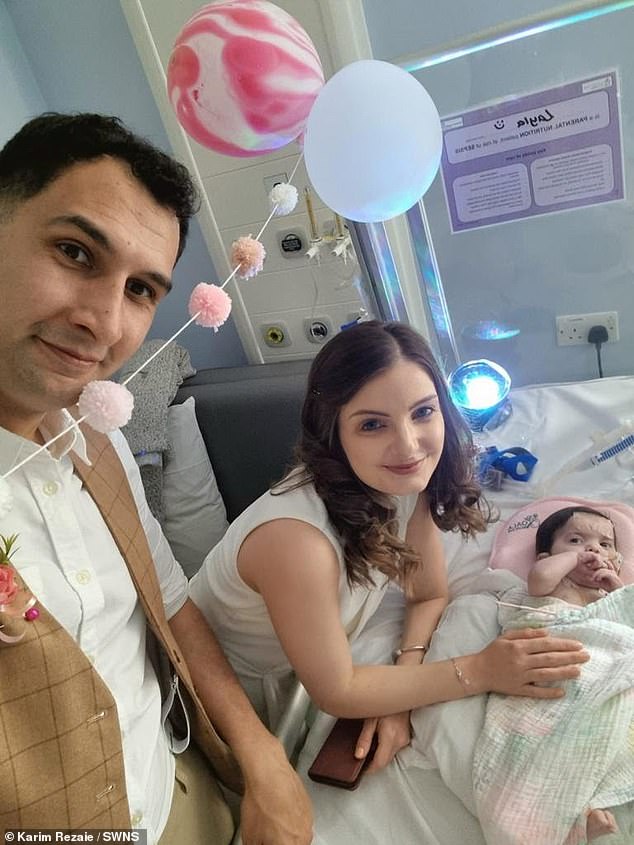 This is the moment a baby was bridesmaid for her parents’ wedding – next to her hospital bed where she is being treated for a rare genetic condition that has affected her eating, vision, and heart and other complications

The hospital’s team had arranged a wedding blessing to take place in the ward.

The couple had a cake, baloons, floral garlands and bunting made with family photos decorating the ward to make their day special

Karim, 38, said: ‘We’d always wanted to get married with Layla our daughter there.

‘It was obviously a beautiful with the amount of effort they put in. 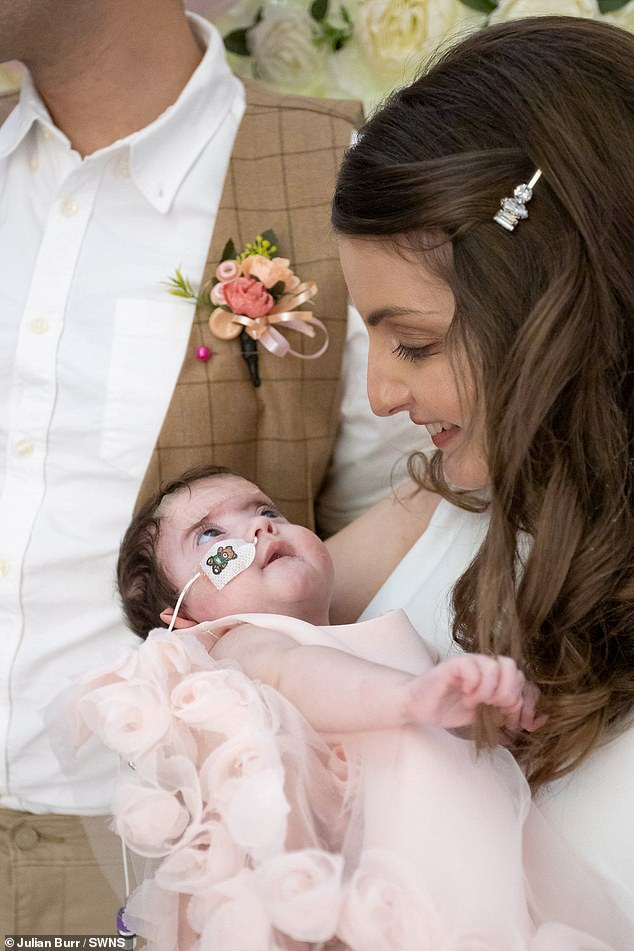 Look of love: Layla, dressed in a frilly pink gown, gazes up at her mother Louise on her wedding day at Bristol Children’s Hospital 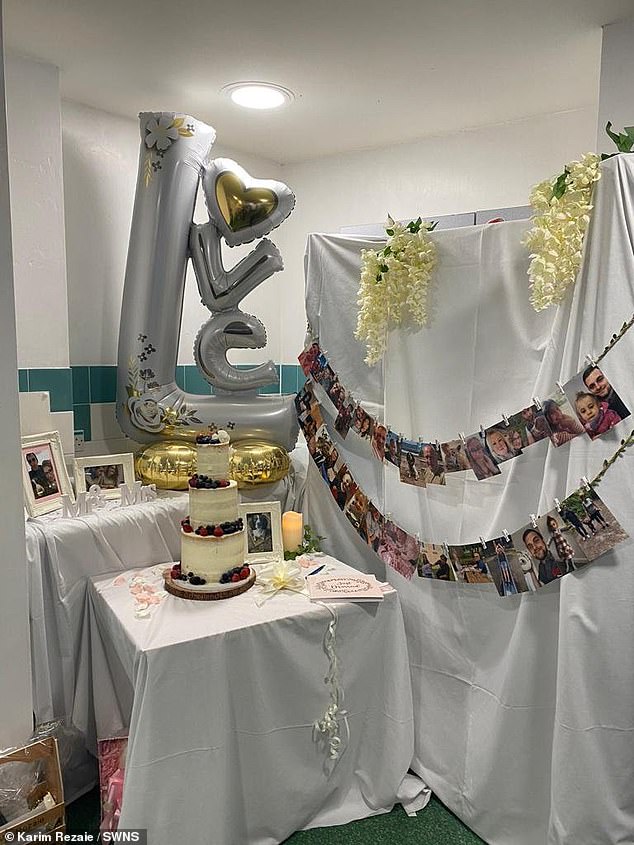 The couple had a cake, baloons, floral garlands and bunting made with family photos decorating the ward to make their day special 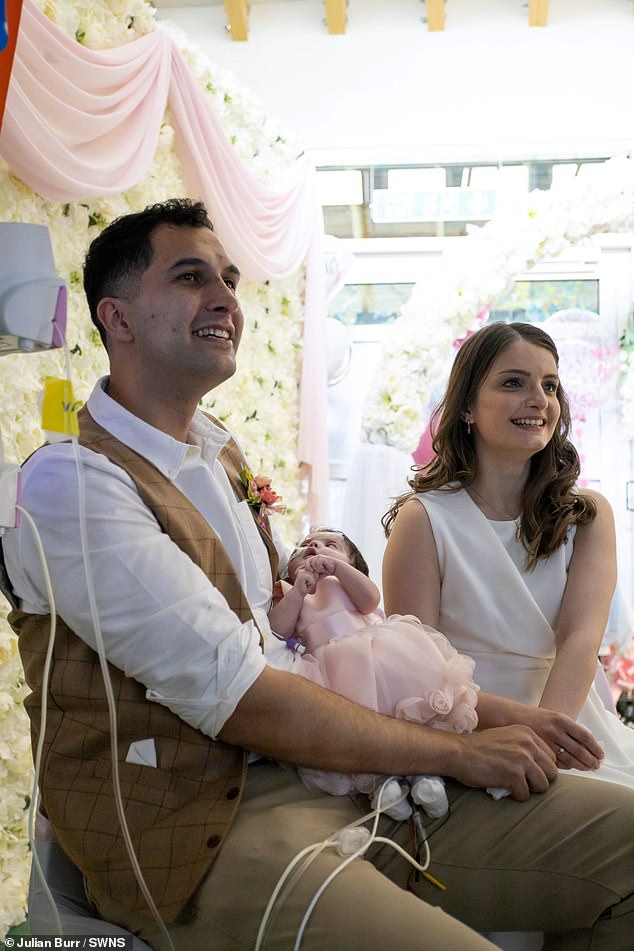 Karim and Louise Rezaie on their ‘magical’ wedding day at Bristol Children’s Hospital. The couple were determined to make sure their baby daughter was part of the celebrations 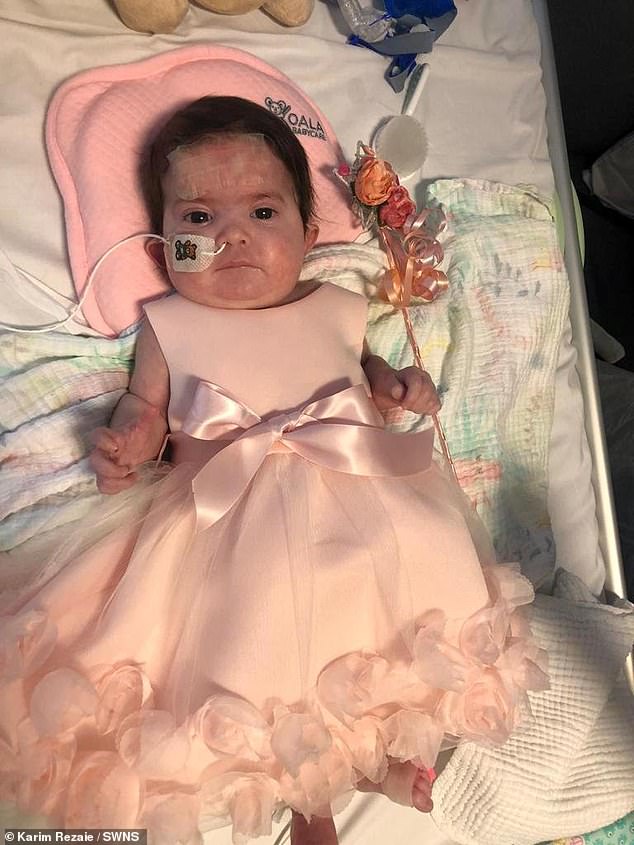 ‘We initially imagined having the chaplain come down and just do a wedding by the bedside, but the play team really put the effort in.’

Layla suffers from CHARGE syndrome, a random genetic mutation that has affected her eating, vision, and heart and other complications.

Karim, a psychological therapist, said: ‘The whole day was made very magical.

‘A huge tremendous effort was put in by the playmate workers into arranging decorations and music, getting in touch with our relatives, and getting videos recorded for people who could be there.’ 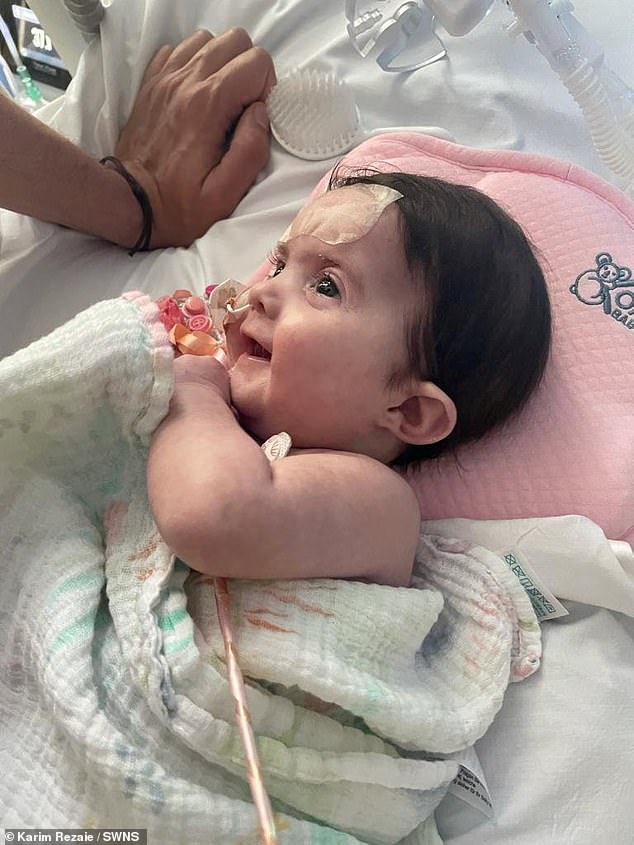 Happy baby! Despite the challenges she faces Layla is all smiles, and her parents hope to be able to take her home in the coming weeks or months 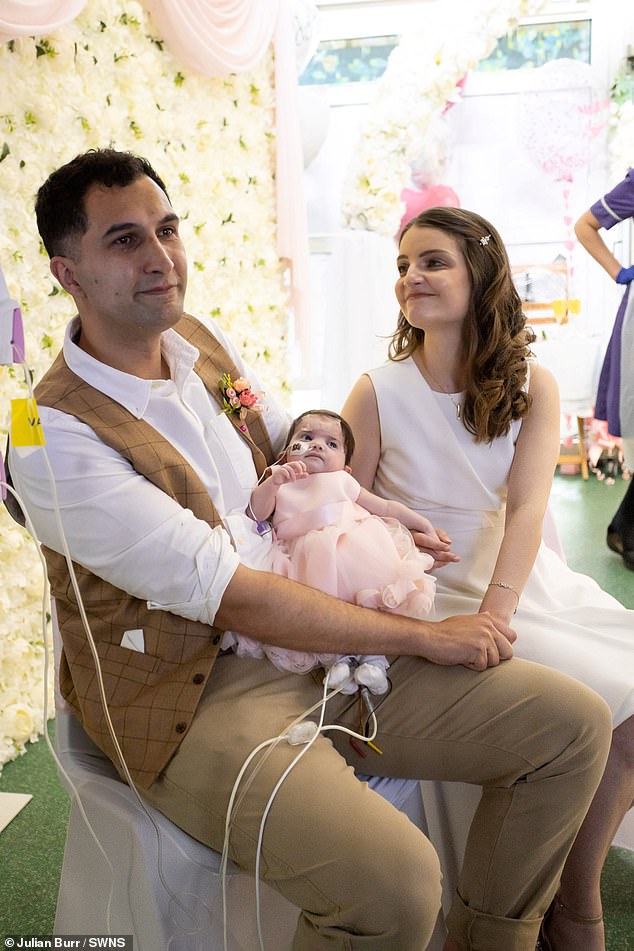 Wedding belle! Layla was dressed in an adorable pink bridesmaids dress trimmed with roses as bridesmaid to her proud parents 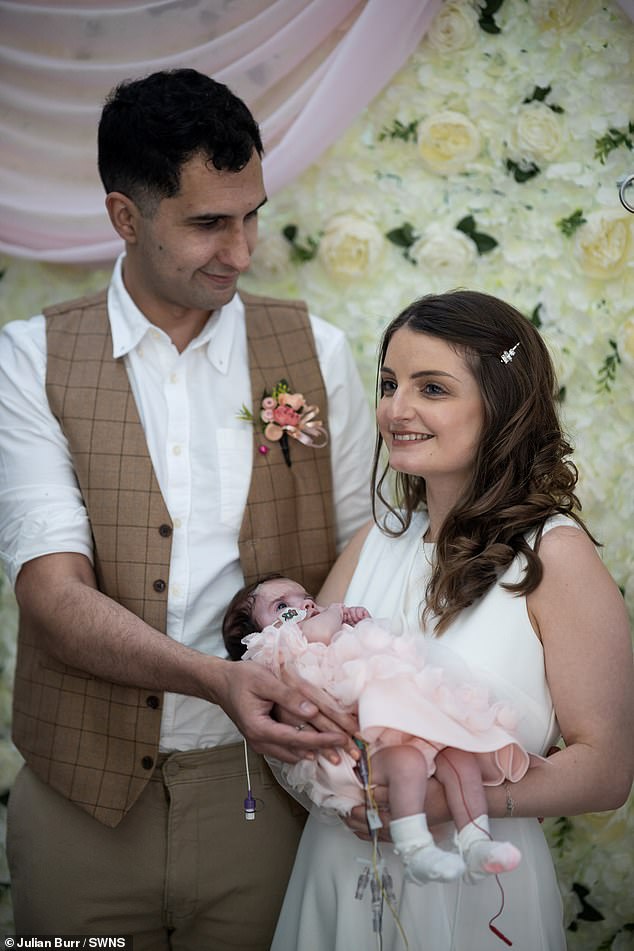 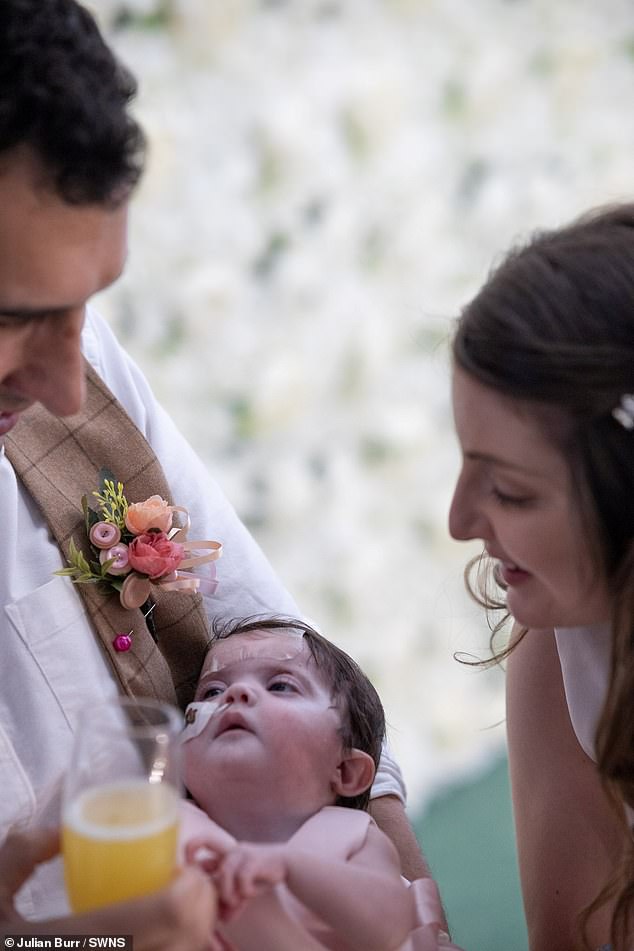 A number of people volunteered on the day, from a professional photographer to a hairstylist.

‘It was a really special day but obviously it was bittersweet.

‘Layla was there, and it was fantastic but we were reminded how poorly she was but it was still great for it to happen.

‘The doctors have said it could take weeks or months before we can take her home.’

What is CHARGE syndrome and what’s the prognosis for children?

CHARGE syndrome is a compex genetic syndrome, involving extensive medical and physical difficulties that differ from child to child.

Babies with CHARGE syndrome are often born with life-threatening birth defects. They spend many months in the hospital and undergo many surgeries and other treatments. Swallowing and breathing problems make life difficult even when they come home. Most have hearing loss, vision loss, and balance problems that delay their development and communication.

The letters in CHARGE stand for: Coloboma of the eye, Heart defects, Atresia of the choanae, Retardation of growth and development, and Ear abnormalities and deafness.