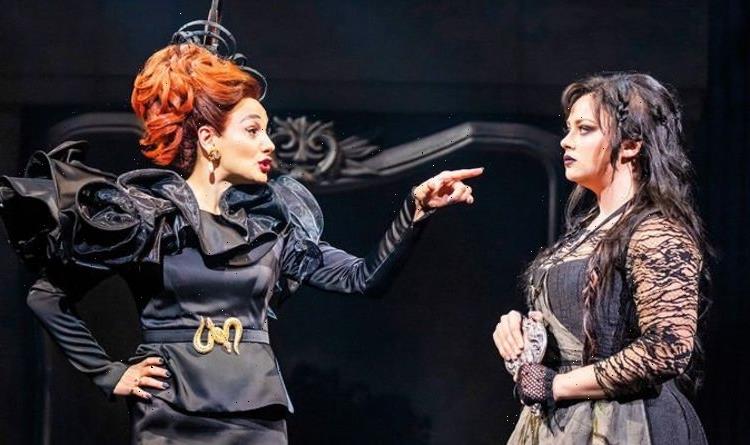 It had often felt like it would take more than a glass slipper and battalion of fairy godmothers to get to this ball. The backstory seemed more dramatic than the Grimm’est of fairytales, with numerous setbacks soundtracked by Lloyd-Webber’s operatic attacks on the government over their muddled Covid responses. With the eyes of the world (and Whitehall’s finest) on opening night, a score by a musical theatre legend, a book by Oscar winner Emerald Fennell and red hot leading lady Carrie Hope Fletcher, expectations were sky-high.

The show duly ticks every buzzworthy box from gender politics to body image and throws in a showstopping gay kiss for good measure. As expected with every grand Lloyd-Webber production there is one particularly showstopping moment that ranks up there with the Phantom gondoliering through the catacombs. The cast is excellent and The Lord has delivered a couple of beautiful melodies that sit comfortably with his finest work. But there are just not enough of them and the show is so focussed on its muddled message that the wheels rather come off the carriage by the end.

The thing is, fairytales have always had messages, this is nothing new. The best maintain a pitilessly precise inner rhythm that never sacrifices painful truths for sentiment. For this new Cinderella, Fennell has taken the traditional rags to royal riches schtick and given it a brisk update with a modern morality makeover. We’re in the screamingly superficial kingdom of Belleville, where appearances are all that matter and in these days of equal opportunity objectification the musclebound baker is proud to flaunt his “hot buns.” The idolised masculine ideal Prince Charming is missing, presumed dead, and his ruthless mother is quick to monetise sympathy with a new statue and a photo opp. But the statue has been defaced and the entire town knows there can only be one rotten egg what dunnit.

Step forward Fletcher’s ‘Bad Cinderella’ and because subtle this show ain’t, it’s also a song. It’s perfectly delivered by a leading lady who is equally effortless at playing the malcontent outsider who rages at the inanity around her as she is as revealing her character’s inner insecurities and fragility. The bombastic I Know I Have A Heart and achingly tender Far Too Late are classic Lloyd-Webber compositions and Fletcher slays both with ease.

She’s matched by exciting newcomer Ivano Turco as Prince Sebastian. Fresh out of drama school, he brings an endearing coltish awkwardness to a shy young man forced to step into his older brother’s shoes. The fact that his beautiful but raw voice occasionally wavers only adds to the appeal, especially on the power ballad Only You, Lonely You. It can’t be ignored that he also looks startlingly like a young Michael Jackson at his peak, and moves like him in the frustratingly brief moment when he is allowed to dance.

There is slick support from Georgina Castle and Laura Baldwin as the viciously vapid stepsisters, one of whom fears she will be left on the shelf as a “spider” before the other cuts in “spinster.” But the even more fabulous double-act between Rebecca Trehearn’s Queen and Victoria Hamilton-Barrit’s Stepmother often steals the show. Both rock a series of ever more sensational camp couture gowns and hats as they trade barbed power plays. In addition to the wardrobe, Hamilton-Barrit also maintains an extraordinary gaspy rasped voice and series of ludicrous Botox’d expressions that most drag queens would die for.

Both pairs of actresses are wonderful, but their material doesn’t quite match the potential. Lyrically and musically, the stepsisters’ Unfair can’t hold a candle to Rodgers and Hammerstein’s Stepsisters’ Lament and the badinage of the older women’s accordian-infused I Know You echoes the heavenly I Remember It Well from Gigi.

In fact, I kept having flashbacks to other songs that are actually from Lloyd-Webber’s own repertoire. The dark makeover scene to Beauty Has A Price reminded me of the lighter, brighter and more biting Eternal Youth Is Worth A Little Suffering from Sunset Boulevard. The undeniably crowd-pleasing Hunks’ Song offers up a testosterone-fuelled frolic with topless male totty flexing for laughs, despite the underlying message of toxic masculinity. Evita’s army officers spitting out Peron’s Latest Flame hits harder and deeper.

Cinderella and Sebastian’s main anthems are undeniable Lloyd-Webber classics but much else is not. The big finale to Marry For Love is an underwhelming tune that should ring in your ears and heart. It epitomises too many moments when the show is belting out self-aware, socially conscious sentiment but can’t quite hit the right note. And what exactly does our ‘Bad Cinderella’ want in the end? Her own snobbery against the townsfolk is exposed when she transforms herself into an idealised beauty only to be ‘saved’ from the lazily relentless premise that ‘pretty equals bad’ by someone else’s actions. She finally realises she is her own worst enemy. Realistic, sure, but hardly exhilarating.