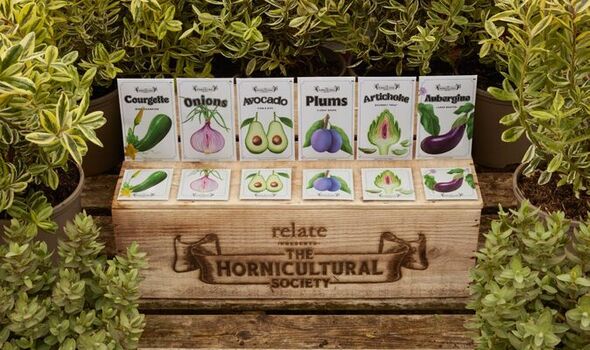 They come in garden seed-style packaging and will be available in six naughty veg themes, including onions, avocado, plums, artichokes, courgette, and aubergine.

The condoms are also sustainable and can be planted in a pot to degrade.

Relationship charity, Relate, is behind the “The Hornicultural Society” campaign, which hopes to end the stigma among older generations when it comes to talking about sex.

It comes after research of 2,000 adults found half of Brits (51 percent) find it difficult to have conversations about intercourse – including 38 percent of over 65s – with adults avoiding the topic because it makes them feel awkward.

And two-thirds think there is a reluctance to talk about STIs among the older demographic.

The study found 43 percent of those aged 65 and over feel more confident and liberated now when it comes to sex than at any other point in their lives.

And more than half consider themselves to be adventurous in the bedroom.

Relationship psychotherapist and Relate president, Anjula Mutanda, said: “Sex and intimacy can be as adventurous and fulfilling in later life as it can be at any age.

“It might be different – for physical or other reasons – but it’s brilliant that our research showed it’s still a significant part of life for those who want it to be.

“And we shouldn’t be afraid to talk about the importance of safe sex, regardless of age.”

The study also found 16 percent of over 65s have purchased or considered buying sex toys for themselves or their partner during the past 12 months.

More than half of this age group (52 percent) have sex once to twice a week – with 12 percent claiming to have intercourse more now than at any other time in their lives.

However, the research, carried out through OnePoll, found 80 percent of over 65s haven’t bought condoms in the past six months.

According to Age UK, STIs have more than doubled in the past 10 years among adults aged 65 years and over.

And Public Health England data found syphilis diagnoses increased by 86 percent among the over 65s between 2015 and 2019.

Anjula Mutanda added: “By bringing the sexual health debate to an unexpected environment like a garden centre, we’re once again trying to help break down taboos, and get people up and down the country talking about the joy of later life sex.”

The limited-edition condoms are available here, and also in-store at Finchley Nurseries in London.