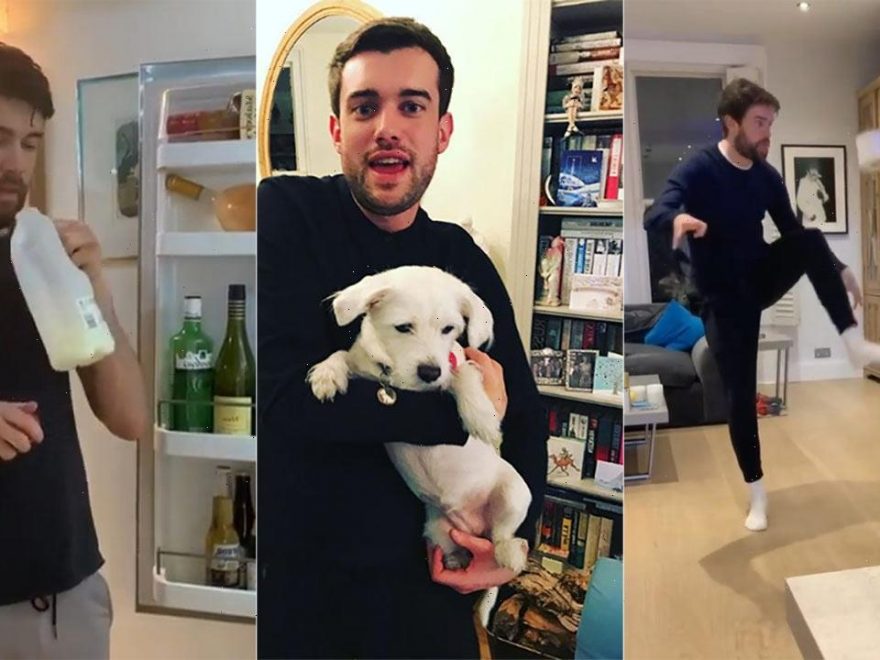 Jungle Cruise star Jack Whitehall lives in Putney, the same area where he grew up with his parents and two siblings Molly Louise Anushka and Barnaby William Frances. During the coronavirus lockdown, Jack and his girlfriend Roxy Horner gave fans many glimpses inside their modern home, take a look…

Jack shared a glimpse inside his living room when he filmed a comedy sketch alongside boxer Anthony Joshua during the pandemic. It's decorated with white walls and wooden floors, and features a black L-shaped sofa with a flatscreen TV on the wall and two large sash windows.

There's also a statue of the Tutankhamun in one corner, and a barbell and gym bench which Jack used to keep fit while gyms were closed.

MORE: 29 celebrity bathrooms that are even more beautiful than we imagined

From another angle, fans could see Jack's triptych of record artworks in his living room – adding a pop of colour to his plain white walls. The modern grey cushions on his sofa were also visible.

Apparently Jack does a lot of reading, because almost all of the walls in his living area feature overflowing bookcases. There's also a fireplace and a large oval-shaped mirror in a wooden frame.

Jack posted a video of himself eating breakfast, and inadvertently revealed a look at his ultra modern staircase. The stairs are silver metal, and are framed with glass and a matching silver bannister.

Doing his best Salt Bae impression, Jack stands in his kitchen featuring cream cupboards and marble worktops. There's a silver oven and cooker hood, and it opens on to Jack’s back garden via big glass doors.

Turkey aside, Jack Whitehall’s bathroom features a white freestanding bath with a wooden shelf in one corner, black and white walls and a polished silver tap.

In keeping with the bathroom, the toilet also features white walls and a white sink, and marble counters. Jack adds to the décor with a green plant that sits in a matching marble pot. On the wall hangs a photo of Die Hard protagonist John McClane in a black frame because, in the words of Jack, "Why have a picture of a relative in your lavatory when you can have a picture of John McClane".

Jack is yet to reveal much of his bedroom, but what he has shared is that he has a signed photo from the Chuckle Brothers on his bedside table.