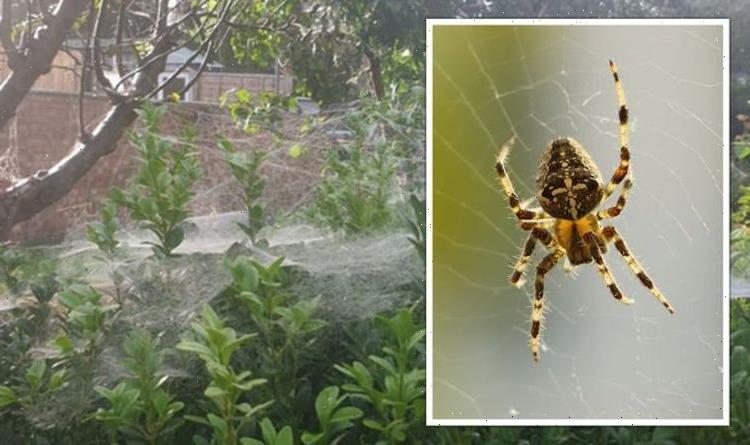 A cluster of venomous eight-legged insects left residents terrified in the small town of Abington, Northamptonshire this week. Shocking images showed huge webs which were created by false widow spiders engulfing the garden. More than 15 of the venomous arachnids were counted in the garden on Saturday morning.

Last week, a school in the same area was forced to close after the spiders were spotted on the grounds.

Malcolm Arnold Academy sent its students home after a false widow was spotted on Friday.

An email was sent to parents on Friday assuring them the area was “isolated”.

The email read: ”We have today found a false widow spider in school.

“Some of you may remember this has happened in the past.

“Pest control are on their way and the area is isolated, but to be cautious we would recommend that your child is collected as soon as you are able for years eight, nine and 10.”

A spokesperson for the school said: “We have been in close contact with parents today to let them know that a small number of false widow spiders have been found in school.

“The safety and wellbeing of our students and staff will always be our top priority.

“The school also closed in 2018 for a spider sighting, but staff have assured parents that there is ‘no cause for concern’.”

Black widows are found in warmer regions such as Australia, the US and South America.

Looking for a new home, or just fancy a look? Add your postcode below or visit InYourArea

False widows can bite humans, however, attacks are rare.

A bite from a false widow looks similar to a host of other insect bites and stings.

A small hole or inflamed lump may be visible on the skin and it may be filled with fluid.

False widow spiders have a dark brown body at the front and a large oval-shaped rear which can have cream and brown marks on it.

Some markings can look like they’re skull-shaped but many of them have very few markings.

They are more often found in southern England but are moving north, according to The Wildlife Trusts.

September tends to be a particularly active month for spiders and is often known as “spider season”.

The weather is both damp and warm which is the perfect environment for spiders to mate.