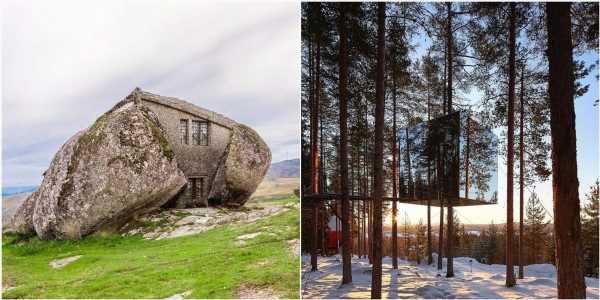 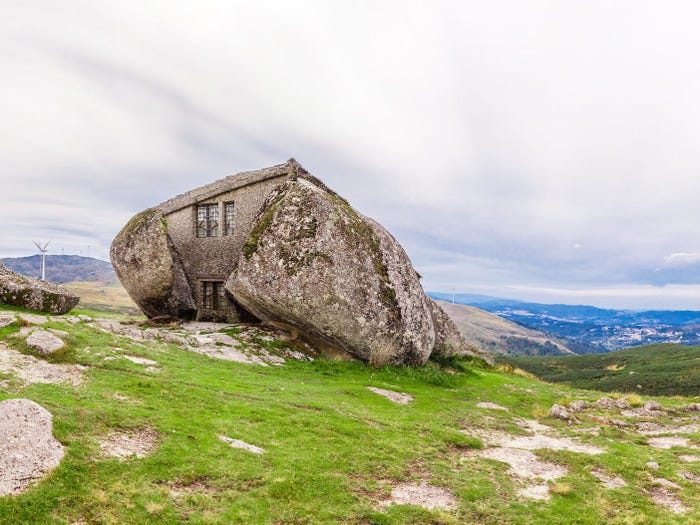 A home called The House of the Big Arch disappears into the canopy of a South African nature reserve. 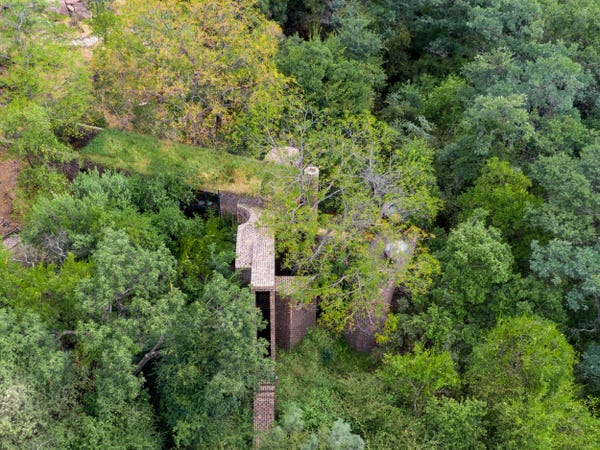 As Insider previously reported, Johannesburg-based architecture studio Frankie Pappas designed the home around the landscape after the owners requested the company did not disturb the sandstone cliffs or forest. Incredibly, no trees were demolished during the build.

So as not to interfere with the landscape, the home is just 11 feet wide in some parts, and due to its remote location, it's off-grid. 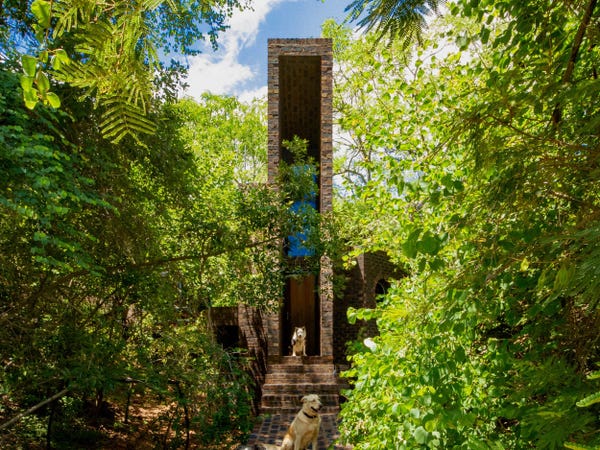 But there’s real luxury hidden beneath the canopy: The home has a wine cellar, a pool, multiple courtyards, and a study. It uses solar panels to power the home, and rainwater is collected for use in the home.

“This architecture could exist nowhere else in the world,” the studio wrote.

Edgeland House in Austin, Texas, is hard to see beneath the grass. 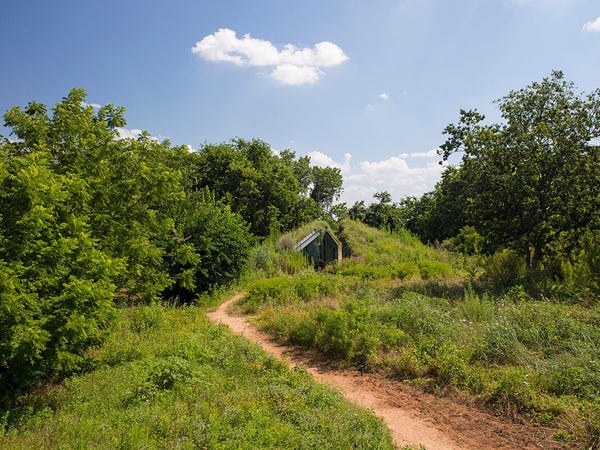 According to the architects, Bercy Chen Studio, the unusual home was commissioned by a science-fiction writer and built on a former brownfield site.

But as you get closer, you can see a modern pit house emerging from the earth. 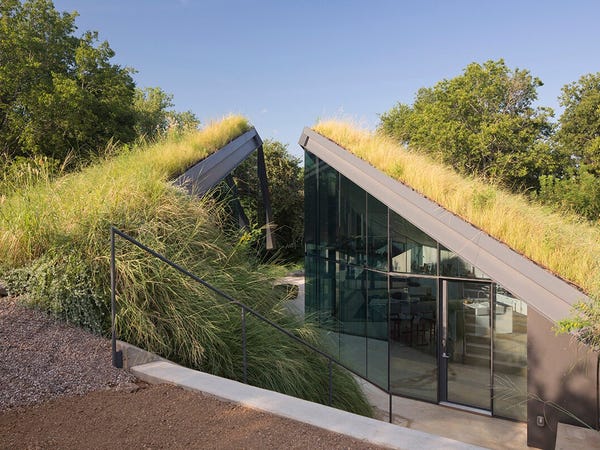 The home, which was built in 2012, took its inspiration from Native American pit houses. Built in the ground, the home uses the surrounding earth to maintain the inside temperature — it keeps the home cool in the summer and warm in the winter.

Beneath its green roof are two distinct living areas — bedrooms on one side and a social room on the other — that lead to a pool. 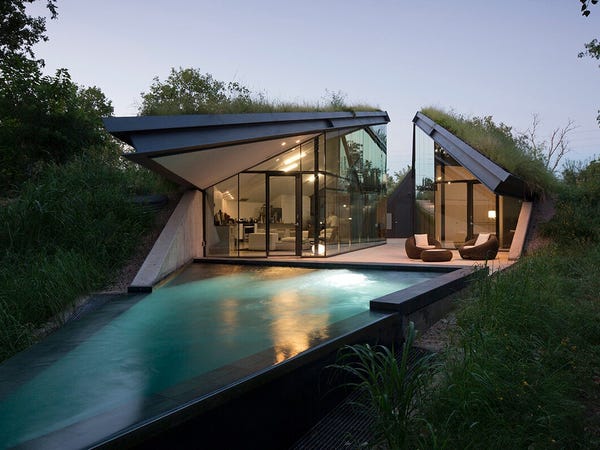 The design of the house, with its open walkway, allows air to flow freely between the bluff above and a river below.

“The courtyard is a theater for observing migrating humming birds,  monarch butterflies, even ant colonies … etc, heightening one’s awareness of nature in an urban setting,” the architect said, ArchDaily reported. “We collaborated with the Lady Bird Wildflower Center to reintroduce over 40 native species of wildflowers and grass to preserve the local ecosystem.”

From afar, Casa do Penedo simply looks like a giant boulder sitting on Portugal's mountainous landscape. 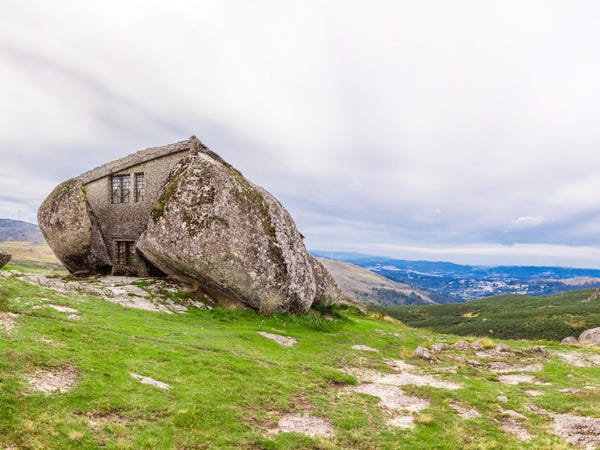 Look closer and you’ll see a home between the boulders. Casa do Penedo was built from four large boulders, which act as the foundation, walls, and ceiling. It was completed in 1974.

The curious building, which is in Montanhas de Fafe in northern Portugal, was initially a residence but is now used as a museum. 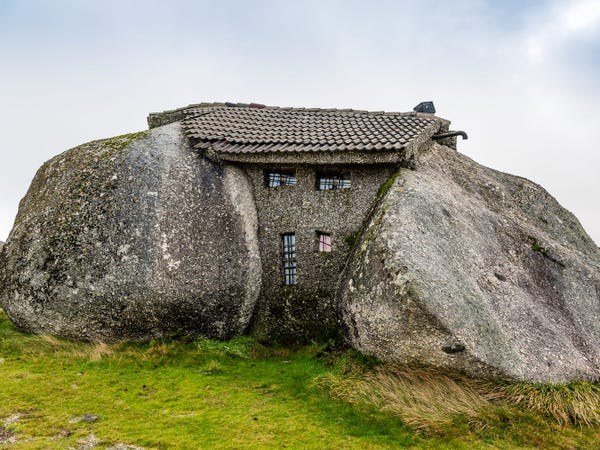 Visitors can tour the building, which organizers say is “considered the strangest house in the world.”

Its former owners would see by candlelight because there was no electricity inside the home, Forbes reported. There is also a fireplace inside, and the stairs are made from logs.

This three-bedroom home in Iceland was designed to blend in perfectly with the surrounding landscape. 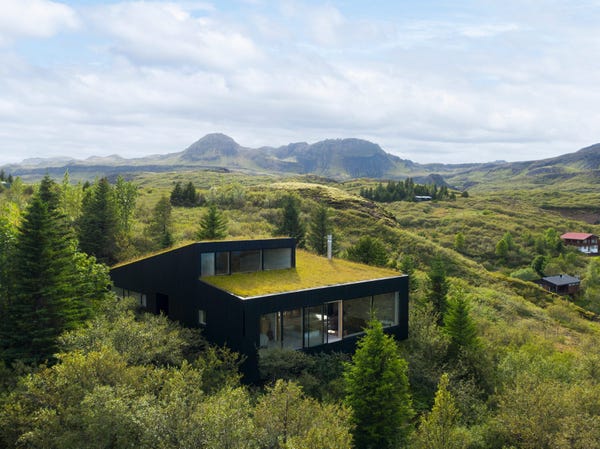 KRADS, an architecture firm in Denmark, built the home near Lake Þingvallavatn, or Lake Thingvallavatn, in Iceland, which is surrounded by dense vegetation. The owners wanted the house to work with the landscape, rather than ruin it.

“Icelandic nature is generally quite barren, therefore large trees and bushes are precious, and there was a lot on the site,” Kristján Eggertsson, an architect at KRADS, previously told Insider. “By angling the house carefully we were able to leave most of the oldest pine trees untouched along with most of the lower vegetation that envelops the house.”

The roof, which slopes with the landscape, is covered in grass and moss so that the house doesn't ruin the view. 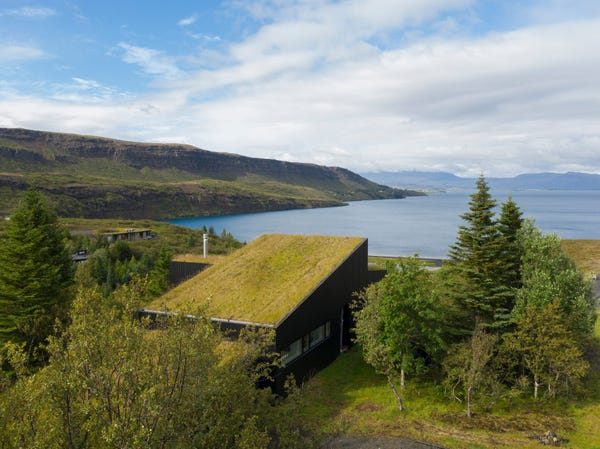 “Our clients wanted to make sure that their house would not be visually intrusive or obstruct the view towards the lake from the neighboring houses further up the hill,” Eggertsson said. “This to a large degree guided the idea of the sloping roof. As seen from the houses above, the building almost becomes one with the landscape.”

This house is hard to see against the fir tree-lined coast of an island in British Columbia, Canada, despite spanning 4,500 square feet. 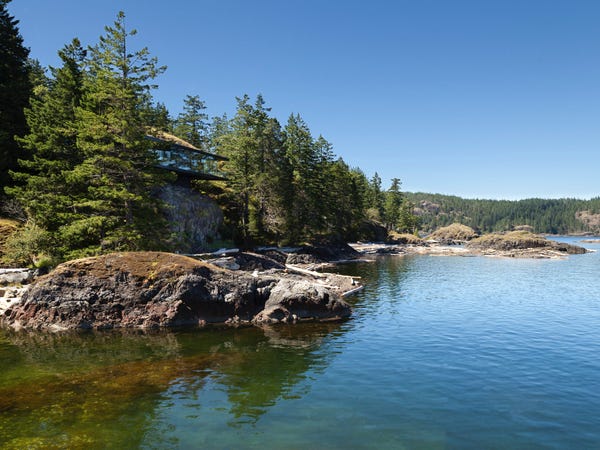 The home, Tula House, was built on Quadra Island, a remote island in the Strait of Georgia, between 2006 and 2012.

“Tula House reflects the casual irregularity of the site’s rock ledges, beach, and forest in both its geometric and spatial order,” said the architects, Patkau Architects.

The home’s walls are covered with charcoal-colored cement panels, “so that from a distance the house visually recedes into the dark forest,” the architects said.

From above, only the glint of the home's skylights give its location away. The roof is covered with moss and native plants. 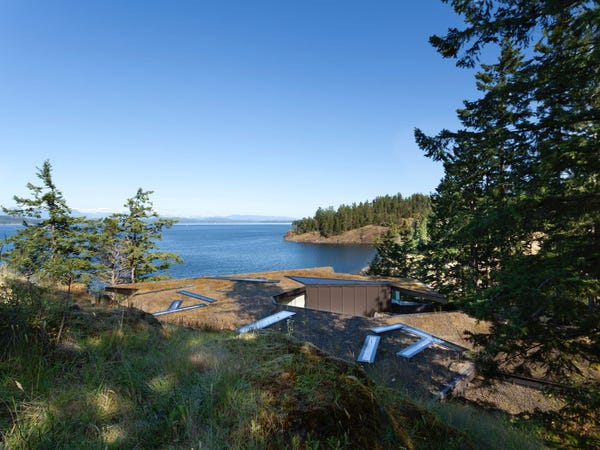 At 5,958 square feet, the roof area is actually larger than the footprint of the home.

The home sits in an opening between the trees 44 feet above the Pacific Ocean. 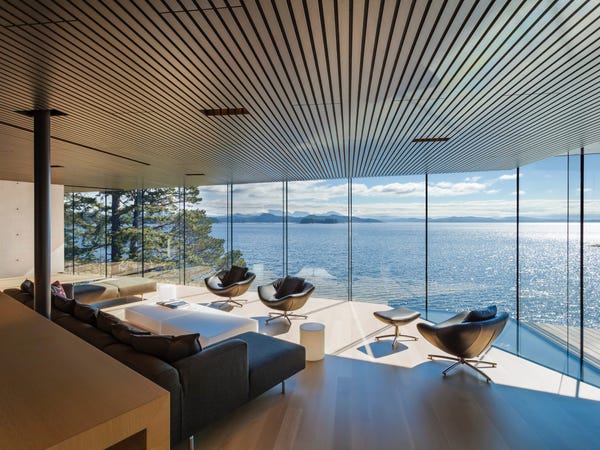 Large windows give uninterrupted views of other islands in the Strait of Georgia, as well as the mountains on the mainland of British Columbia.

It's hard to spot the Mirrorcube hotel suspended from the trees in Harads, Northern Sweden. 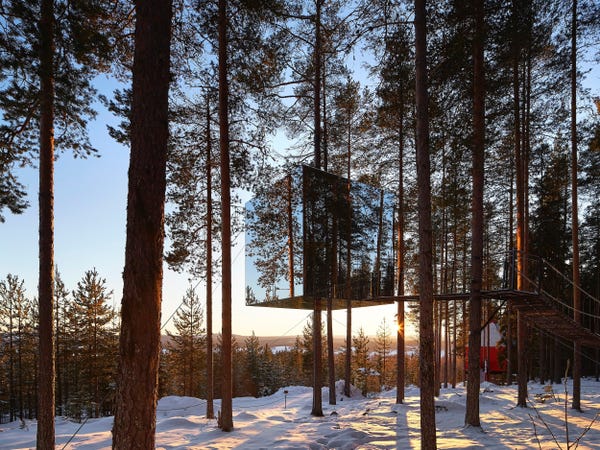 The hotel, which was designed by Tham & Videgård Arkitekter and built in 2010, measures 13 feet by 13 feet.

The hotel room, which is accessible via a 40-foot rope bridge, sleeps two. 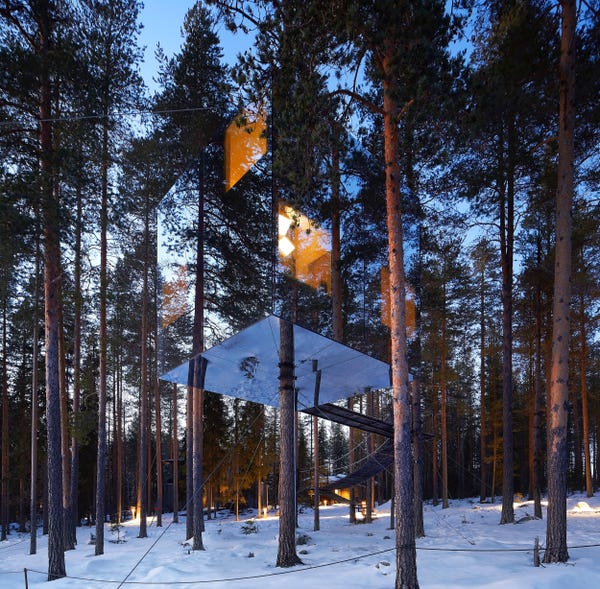 Inside, there is a double bed, a lounge, a bathroom, and a rooftop terrace, according to the hotel’s website.

The architects noted that the mirrored glass actually features transparent stickers that are visible to birds, preventing them from flying into the windows.

A collection of earth houses are tucked beneath the grass in Dietikon, Switzerland. 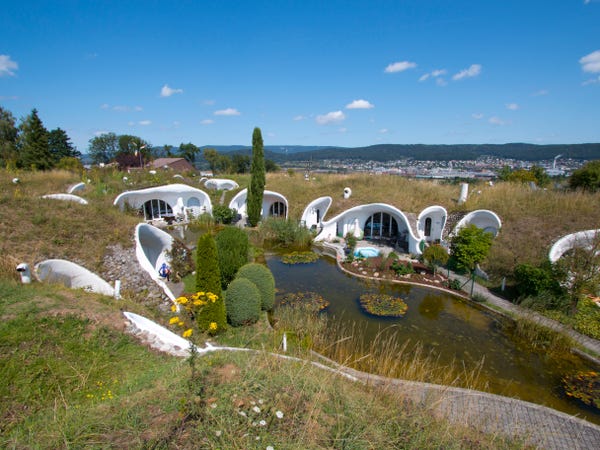 Earth House Estate Laettenstrasse is the work of Vetsch Architektur, a Zurich-based firm. The company has built more than 90 earth houses across the world, but this estate has nine separate homes. While they may look cozy, one of the homes has seven bedrooms.

Similarly, these Hobbit Houses in Turkey would be impossible to detect from above. 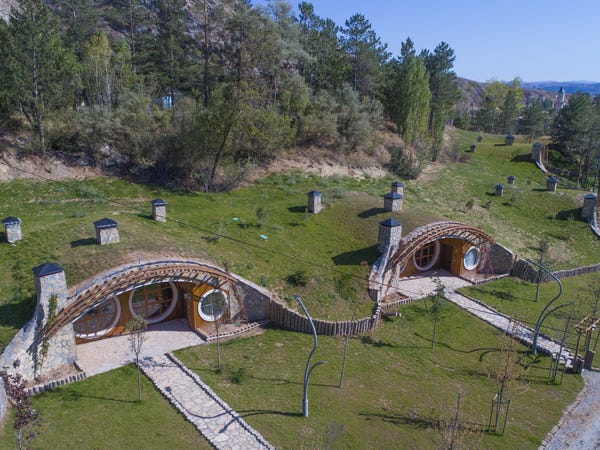 These vacation homes in Sivas were inspired by the Hobbit houses in “Lord Of The Rings.” Carved into the hillside, each 700-square-foot house has a bedroom, living room, bathroom, and kitchen. So far, they’ve proven to be popular with tourists.

“We are planning to increase this number to 40 or 50 in the future. People are staying at these houses for a few days to relieve their exhaustion,” Sivas mayor, Sami Aydin, told Anadolu Agency in 2018.

Turf houses in Iceland use the same technique to blend into their surroundings and keep the home well-insulated. 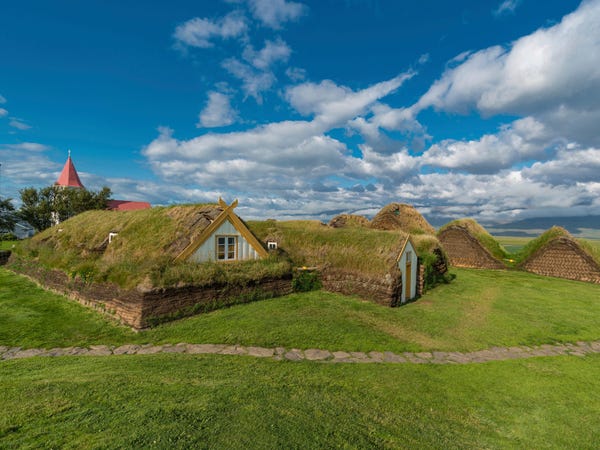 The Glaumbaer turf house, pictured, was built with turf, stones, and timber, and some parts date back to the 18th century. It’s comprised of 13 buildings that are linked inside.

Its last inhabitants moved out in 1947, and now it’s part of the National Museum of Iceland.

A traditional home in Norway also camouflages into its surroundings. 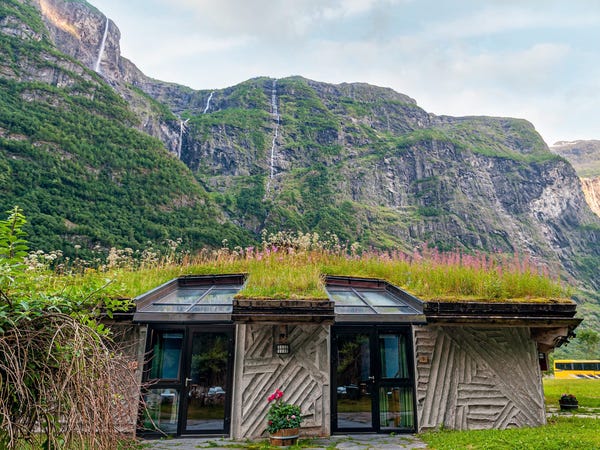 The home in Gudvangen, Norway, has a roof covered with grass and wildflowers.

A clifftop cave house takes inspiration from its surroundings in the Blue Mountains in Australia. 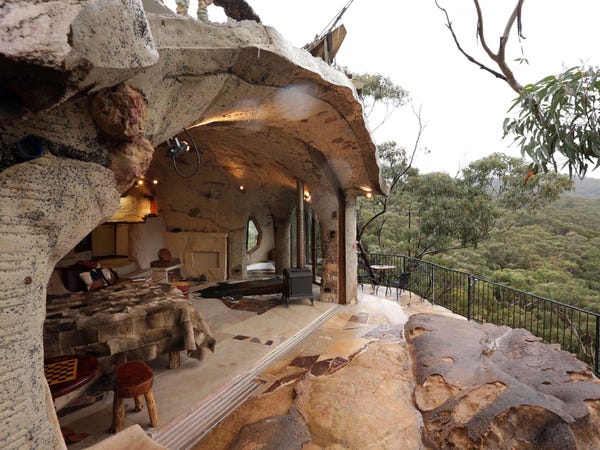 The house, pictured in 2015, was designed by its owner, Lionel Buckett, who is a sustainable builder. It was constructed from concrete and steel on a natural rock platform, he told New Atlas.

The open cave is facing north, allowing the home to heat up and cool down naturally while giving spectacular views of hundreds of acres of forests below. In bad weather, a double-glazed glass door can be pulled across the opening.

The home is accessed through a small, round wooden door on the back of the cave. 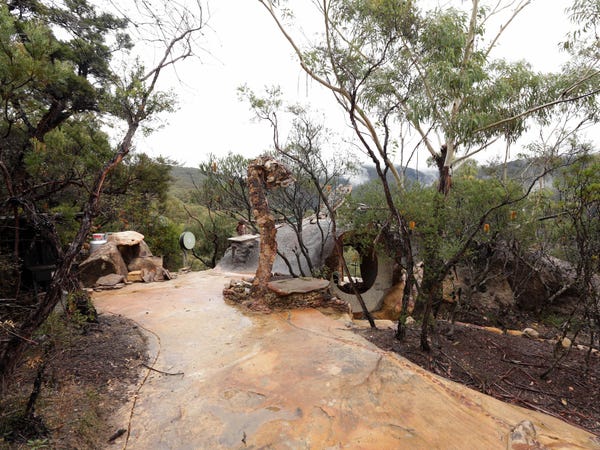 The cave house was built on 600 acres of land that has been in Buckett’s family since the 1950s, New Atlas reported. After he inherited the land, he decided against logging it, and instead built eco friendly homes — like his own — on the land.