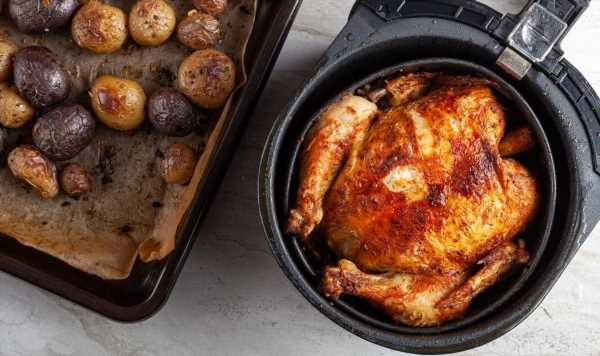 As Britons continue to face the cost-of-living crisis, more and more families are finding ways to save money by using the appliances that cost the least to run. That’s why sales of air fryers have surged in the last few months, but there are other alternatives to a conventional oven too.

Consumer group Which? found that air fryers, as well as microwaves, pressure cookers, and slow cookers, have cheaper running costs than conventional ovens.

However, which is best for which foods?

Although air fryers are cheap to run, in some cases, the appliance can cost up to £300.

But, Which? added that “the hype could be justified” in some cases, especially if a family can get their hands on a cheap air fryer.

Looking at specific foods, Which? found that the cheapest and quickest method of cooking a roast chicken was with a pressure cooker, costing 11p and taking 32 minutes.

If cooking a chicken in the oven, this would cost 39p and take 76 minutes.

However, the consumer group noted that the cheaper method didn’t produce the crispy skin that cooking chicken in the oven usually produces.

Meanwhile, cooking chicken in an air fryer would cost just a little more expensive than in a pressure cooker, at 18p.

As for chips, an air fryer is the cheapest appliance to cook them in, costing 10p for two portions of chips, compared with 29p in the oven.

Even baking a cake was cheaper using an air fryer, costing 8p, compared with 24p in an oven.

For cooking soup, the induction hob and pressure cooker were the cheapest, at 9p.

A microwave was the cheapest appliance for cooking vegetables and jacket potatoes.

Emily Seymour, Which? energy editor, commented on the findings, saying: “Energy bills are a real concern for millions of households across the country, especially when many are already feeling the pressures of the cost-of-living crisis, and cooking is one of the everyday costs that really mount up over time.

“There has been a surge of interest in air fryers and smaller cooking appliances in recent months, and our research shows that the hype could be justified in some cases, as we’ve found these products cost less to cook certain foods than conventional ovens.

“The cost savings will soon be lost if you have to cook more than one batch though, so it’s still better to use your oven if you’re cooking large quantities.

“But for quick, small meals, we’ve found that it’s worth trying out the alternatives.”

Cooking foods in the air fryer is a little different to doing so in the oven, and chef Jennifer Banz of Low Carb with Jennifer, has shared how to cook a roast chicken in the appliance.

Jennifer recommended cooking a whole chicken, breast down in the fryer, for 50 minutes. Her chicken was five pounds, while, with a smaller one, cooking time would be reduced.

After cooking the chicken breast down for 50 minutes, at 180°C, the chef flipped it and cooked it for another 10 minutes.

She advised making sure that the internal temperature of the breast was 74°C.