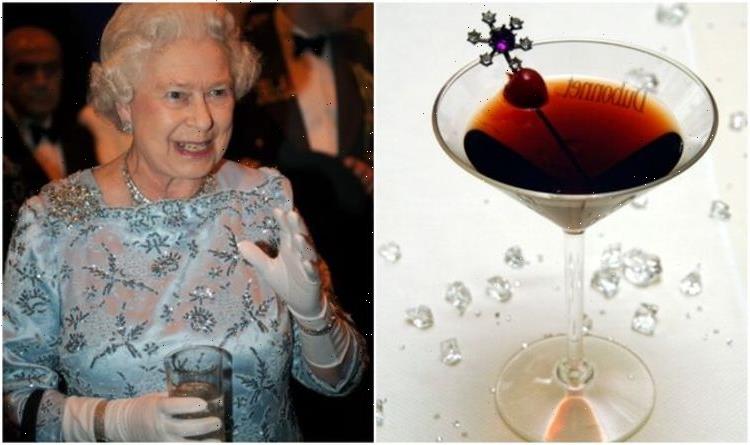 There have been reports throughout the Queen’s reign that she has as much as four drinks a day. However, former royal chef Darren McGrady told CNN: “She’d be pickled if she drank that much. “All I said was she likes a gin and Dubonnet. That’s her favourite drink.”

A gin and Dubonnet is the Queen’s favourite cocktail, and the classic Dubonnet cocktail is not difficult to make.

You will need a bottle of Dubonnet Rouge, a Parisian aperitif made from fortified wine, herbs, fruit zest, and quinine.

It is a cocktail staple that can be found at most alcohol stores in the UK and is served at all royal residences across the UK.

The next thing to do is to add ice, two parts Dubonnet, one part dry gin, and a slice of lemon to a cocktail shaker.

Gordon’s gin has a Royal Warrant which would be a perfect choice if you want to be particularly regal.

After shaking it, then straining it into a cocktail glass, add a few more ice cubes and garnish with a lemon wedge or two and it is ready to be served.

It is a very strong drink, made entirely with alcohol with no mixers at all, similar to a Negroni.

McGrady clarified to CNN that the Queen does not drink alcohol every day: “She doesn’t wake up in the morning and have a large gin and tonic.”

Should I deadhead lavender? Top tips for your lavender plant

He added that when the Queen does have a drink with dinner it is typically a glass of her favourite German sweet wine.

The chef spoke out after previous reports suggested the Queen drinks four alcoholic drinks every day.

This would mean Queen Elizabeth would have far surpassed the recommended alcohol limit of 14 units per week.

It was reported that as well as enjoying her favourite tipple of gin and Dubonnet, the Queen likes to drink a glass of wine at lunch.

She also apparently loved a dry martini later in the evening and a glass of champagne, typically from brands like Bollinger or Lanson before bed.

However, McGrady has refuted these reports saying she likes to have a drink with her dinner, and when she is celebrating she likes to do so with her favourite tipple, the Dubonnet cocktail.

The other members of the Royal Family also enjoy an alcoholic beverage, and they are all so different.

Camilla, the Duchess of Cornwall for instance, loves wine. She is even the president of the UK’s Vineyard Association.

“People always ask me how I became involved in it all, well, first of all, I love wine, but secondly, my father was in the wine business, so I was brought up as a child drinking wine and water rather like the French,” she said at a reception celebrating the association’s 50th anniversary.

Her husband Jack Brooksbank is the brand ambassador of Casamigos, which is probably a staple in her house.

It was also served at their royal wedding in 2018.