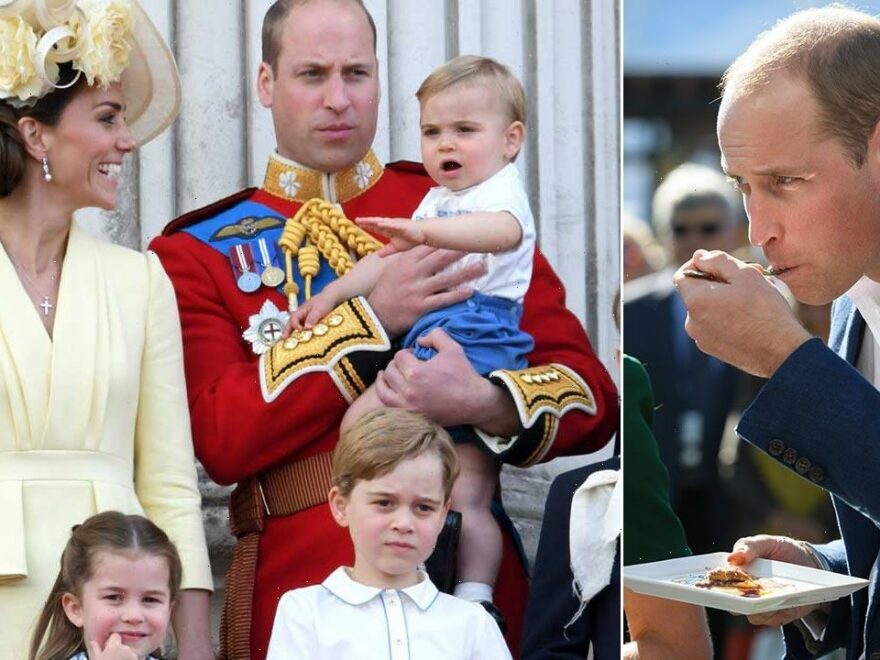 We do love finding out what those royals enjoying eating behind closed doors, and it appears that the Duke of Cambridge has rather a sweet tooth.

Despite learning to cook in Home Economics classes while at Eton College, Prince William certainly has some weird and wonderful eating habits. We’ve rounded up some of the Duke’s most unique food preferences, including some that will certainly leave his children Prince George, Princess Charlotte and Prince Louis a bit miffed. If only we could see their reaction when they find out…

WATCH: Want to know the royals’ snacks of choice? All is revealed

Roast chicken is a traditional Sunday meal, but a young William preferred to pass up on the dish in favour of pizza, according to former royal chef Darren McGrady.

On his website, Darren divulged that the siblings had a craving for pizza one night and decided to take matters into their own hands by tampering with the kitchen instructions.

The Duchess likes to make pizza with her children

William and Harry swapped their nanny’s note for their own note asking for pizza for dinner – except Darren recognised their writing and gave them roast chicken in fear of the nanny’s response.

His love of pizza has clearly continued, as the family-of-five now include it in their own menu at home. Kate previously revealed how their three children like making pizza: “I’ve done that with George and Charlotte – making pizza dough. They love it because they can get their hands messy.”

Darren previously revealed one of Prince William and Prince Harry‘s favourite dishes when they were younger was crispy skin-on chicken with mac and cheese, which were prepared very simply with salt before being roasted in the oven. And who can resist a side of gooey mac and cheese?

The former royal chef divulged that the princes also enjoyed the chicken and mac and cheese with a side of sweetcorn, but when their nanny was in the house, the chicken had to be accompanied by broccoli. And the trade-off was that Harry and William had to eat a floret of broccoli for every piece of chicken they gobbled up!

We wonder if the father-of-three uses this cheeky trick on his own children?

Everyone loves a big wedge of decadent chocolate cake, but William has a fondness for a very specific recipe that he picked up from his grandmother, the Queen – chocolate biscuit cake.

It is known to be one of the Queen’s favourite afternoon tea snacks, and William clearly inherited her sweet tooth as he even requested it at his royal wedding to Kate Middleton in 2011.

Darren told HELLO! Online. “When Prince William first tried it, he loved it and then requested it as his groom’s cake.”

It’s hard to imagine the Duke and Duchess cuddling up in front of a good film with a bag of popcorn, but that could very well be the case after the pair revealed their love of the classic snack.

During the royal tour of Canada and the USA in 2014, the pair were spotted sharing a bucket of popcorn while they attended a basketball game. We can’t say we blame them…

The Cambridge need to watch out for the family choccie pincher!

Like many parents across the UK, William and Kate ensure the Easter Bunny leaves plenty of sweet treats for their three children on Easter Sunday. But we doubt George, Charlotte and Louis would be pleased to know that their dad steals their chocolate when they’re not looking!

During a video call to schoolchildren in April 2020, William said: “There will be a lot of chocolate being eaten here, don’t worry!” With a smile, Kate quickly retorted: “You keep eating it!”

A young Prince William who loved a McDonald’s Happy Meal

While the royal family follow a very healthy diet now, this was not always the case. As well as pizza, William also used to love a trip to McDonald’s when he was a boy.

Darren told Marie Claire, “I remember Princess [Diana] came into the kitchen one day and said, ‘Cancel lunch for the boys I’m taking them out, we’re going to McDonald’s. And I said, ‘Oh my God your royal highness, I can do that, I can do burgers.’ And she said, ‘No, it’s the toy they want.’ Yeah, the boys loved McDonald’s, and going out to pizza, and having potato skins – sort of the American foods.”

The royal doesn’t have nearly as much faith in his culinary skills as his wife Kate! In 2017, William said: “I do like cooking, but I’m not very good,” before revealing his signature dish is steak.

However, the royal said he struggles to cook it for the right amount of time – and with many people very particular about their rare, medium or well-done meat, we can understand his fears.

“I get really worried about cooking it – I hate over-cooking steak,” he said during a visit to the Royal Institution of Chartered Surveyors. “I like it medium-rare, so quite alive.”

Spicy meals are off the menu

Spicy curries are said to be Kate’s favourite takeaway order, but William has revealed he’s not very good with hot foods.

Speaking of his go-to Indian, he said: “Chicken masala, love that, a bit of flavour – I’m not a vindaloo man put it that way.” And even his daughter Charlotte is better at handling spices than he is!

When the Duchess attended a special reception at the Aga Khan Centre in 2019, she said she has to cook several versions of a curry dinner at home to make it suitable for their children. “It’s so hard cooking curry with the family, though. The children have a portion with no spice, yours is medium,” she said to William. “And I quite like it hot.” She added: “Charlotte is pretty good with heat.”