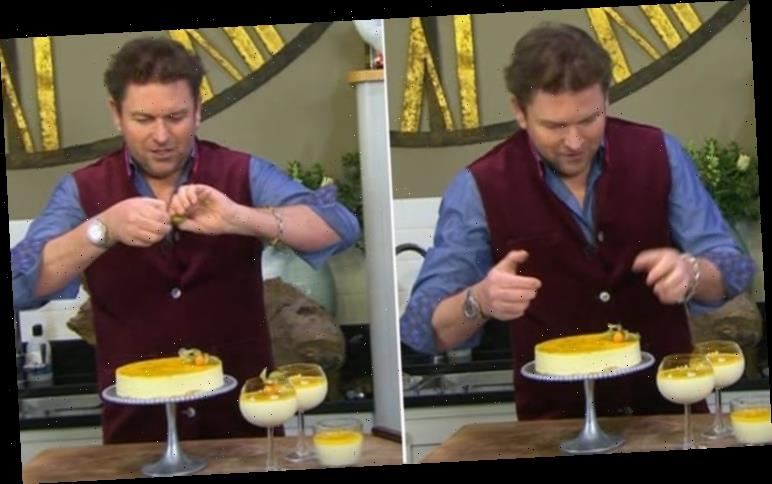 Today is Mother’s Day, and what better way to treat your mum than to make her a delicious cake? James Martin’s Passion Fruit Delice sounds posh and looks elegant, but it can be whipped up in minutes.

To make the bottom of the delice, James took the madeira sponge cake and put it all over the base of a metal cake ring and pressed it down.

Next, he went on to make the cake’s mousse. 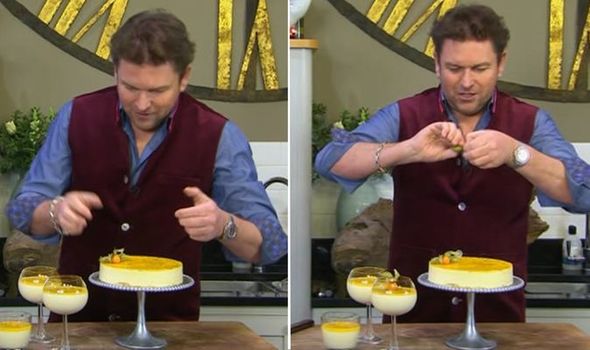 James opted for passionfruit and mango juice and warned against using cordial.

He warmed the juice up and whipped up the cream at the same time.

James then reached for 10 sheets of gelatine and put them all into the pan with the juice, mixing them until the gelatine dissolved.

He then poured the mixture into the bowl with the cold fruit juice, which will make it immediately start to set.

James finished whipping the cream with his hand whisk, getting it to a “nice soft peak” texture.

The chef added passionfruit liqueur to the fruit juice mixture, before “throwing” the cream into the bowl too.

He gently whisked the mixture with a hand whisk again and poured it into the metal cake ring.

“Because you’ve pressed the sponge down, it holds the mousse into the mould,” James said.

If you’ve got any mixture left over, James advised putting the mousse in a few glasses, before putting them in the fridge. 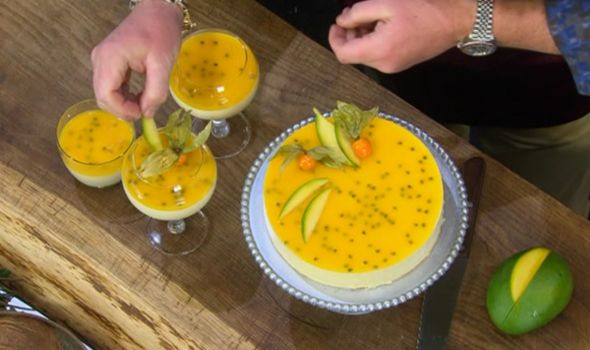 James also put the cake in the fridge and allowed it to set for about an hour and a half.

The next step is the jelly, which James said is “really straightforward”.

He popped a little more juice in the pan, before putting three sheets of gelatine in with it, and whisking the mixture until it dissolves again.

Again, the chef then put the warm mixture into the bowl with a little cold fruit juice and allowed it to cool slightly.

At the same time, James scooped a passionfruit into the mixture and, when cooled, he placed the jelly on top of the cake, as well as adding a few spoonfuls over the top of the mousse in the glasses.

The cake then needs to be put back into the fridge to set for around twenty minutes.

James finished showing viewers how to make the delice by lifting the cake onto a tray and applied heat – using a blowtorch – to the edge of the metal ring so that the delice comes away from the mould.

He also used the blowtorch to re-glaze the top of the cake, before gently taking away the metal ring.

Now, with the delice done, all there was left to do was to decorate the dessert: James opted for gooseberries and slices of mango and orange, advising viewers to “decorate it however you want”.