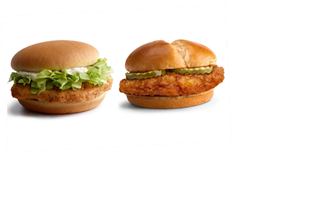 McDonald’s is kicking off 2021 on a tasty note, thanks to the release of not one, but three new crispy chicken sandwiches. Starting on Feb. 24, McDonald’s is dropping a trio of chicken sandwiches that, due to their ingredients, look more like similar offerings from Chick-fil-A or Popeyes than any of their other classic menu items. For starters, this breakdown of the McDonald’s Crispy Chicken Sandwich versus the McChicken highlights a few key differences between the offerings.

Although McDonald’s has revamped its chicken offerings in recent years with the release of Spicy Chicken McNuggets and a Buttermilk Crispy Chicken Sandwich, the company officially headed back into the chicken sandwich wars by introducing a simple but delicious crispy chicken sammie into the mix. Upon first glance, the new Crispy Chicken Sandwich, which will be arriving in stores nationwide on Feb. 24, looks a lot more like a Chick-fil-A sandwich than a McChicken. In addition to featuring a brand new centerpiece (all three versions of the Crispy Chicken Sandwich will use a brand new crispy and juicy fillet that’s made with all-white meat chicken), the sandwiches will all be served between new toasted, buttered potato rolls and feature crinkle cut pickles.

Without further ado, here’s how the new Crispy Chicken Sandwich stacks up against the McChicken.

Three of the biggest differences between the Crispy Chicken Sandwich and the McChicken are the fillets, buns, and toppings — so basically all the major players. In addition to giving the sandwich a new toasted, buttered potato roll, the McDonald’s team also revamped its chicken fillet recipe for this offering by crafting a juicy, all-white meat fillet covered in a new crispy breading. (The exact recipe is under-wraps as of publication, but it will be listed on the website once the sandwiches drop.) Unlike the McChicken, which is served with mayo and lettuce, the Crispy Chicken Sandwich keeps things simple with McDonald’s crinkle cut pickles. 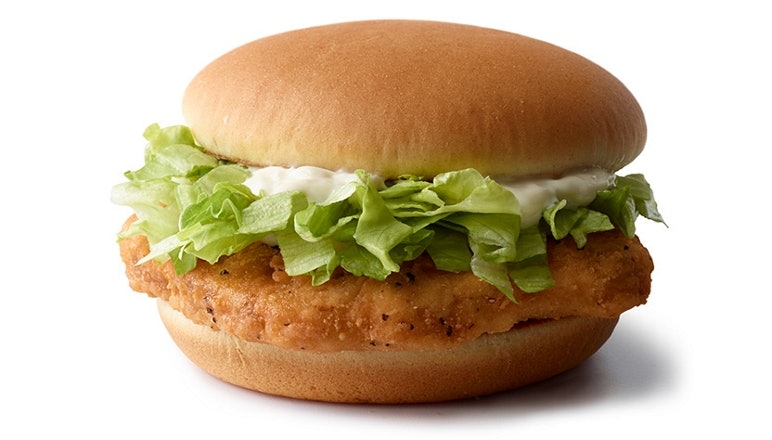 In contrast, McDonald’s McChicken, which was originally introduced in 1980 and then re-introduced in 1988, starts with a thinner crispy chicken fillet that includes wheat flour, corn starch, paprika, sea salt, and garlic powder in its list of ingredients. It comes topped with mayonnaise and shredded iceberg lettuce. It’s also served on a toasted wheat bun instead of the new buttered potato bun.

Despite not looking too different, these two sandwiches don’t really have much in common aside from their chicken base and that you can score one at McDonald’s.

In addition to the new regular Crispy Chicken Sandwich, McDonald’s will also be serving up a spicy version made with Spicy Pepper Sauce. Again, the crispy fillet will be served with crinkle cut pickles on a toasted potato roll. Last but not least, the Golden Arches will also be rolling out a Deluxe Chicken Sandwich, which appears more in line with its McChicken. For this sammie, you can expect the new crispy chicken fillet and toasted potato roll to also come with shredded lettuce, Roma tomatoes, and mayo.

While these three new sandwiches will be available for carryout, delivery, drive thru, and ordering online through the McDonald’s app, you might want to consider trying them through delivery or drive thru if possible, in line with the coronavirus safety recommendations from the Centers for Disease Control and Prevention (CDC) as of Dec. 31. If picking up your sandwich in-store or carrying out an order, make sure to wear a mask and practice social distancing when coming into contact with others. Wash your hands when leaving McDonald’s or after handling any packaging.

If you think you’re showing symptoms of coronavirus, which include fever, shortness of breath, and cough, call your doctor before going to get tested. If you’re anxious about the virus’s spread in your community, visit the CDC for up-to-date information and resources, or seek out mental health support. You can find all Elite Daily’s coverage of coronavirus here.