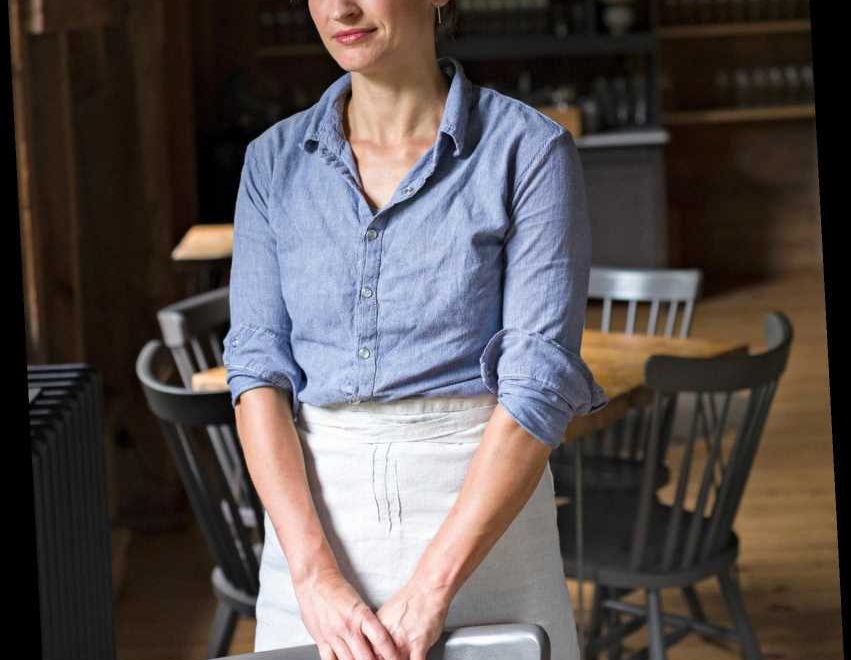 The waterfall outside the Lost Kitchen, the restaurant Erin French opened in 2014, is a reminder of how far she's come.

"The first year we opened, I would stand at the stove and look out the window," French — a home cook who turned Freedom, a remote Maine town with only 719 residents, into a world-famous foodie destination — tells PEOPLE in this week's issue. "It was like, 'Oh my God, I would have never gotten to this beautiful point without all of that pain.' I kept telling myself that I had to cry all of these rivers to find one waterfall."

In 2013 French entered rehab to treat an addiction to alcohol and prescription drugs. At the time, she was in the dark depths of a troubled first marriage, which resulted in divorce, a bitter custody battle for her son, now 18, and the loss of her first restaurant. She was forced to start over—rebuilding her life, her confidence and her career from scratch. Now French, 40, is opening up about her struggles in a new memoir, Finding Freedom, and on The Lost Kitchen, a series on Chip and Joanna Gaines's Magnolia Network (streaming on discovery+). She hopes her story helps others find their way through similarly difficult situations. "We all have imperfect moments," she says. "It's nice to be reminded in those moments that you're not alone."

In many ways French's success in the kitchen seems like destiny. Born and raised in Freedom, she spent her afternoons doing homework in a booth at her dad's family diner. "My whole childhood is filled with memories there," she says. "I remember the nutmeg-laced donuts, so warm and crunchy—I can still taste it." She jumped into different roles, from washing dishes to waiting tables to flipping pancakes. "Food ran through our entire family. We were surrounded by it," she says.

But she still longed for experiences outside small-town life, so she left to study medicine at Northeastern University in Boston. Two years later she dropped out and moved back home when she got pregnant at age 21 by a high school boyfriend. "I was really upset with myself and completely ashamed. I thought I was given a chance, and I threw it all away," she says. "My mother was crazy supportive. She told me, 'There will be joy. We're going to find joy in this.' " French raised her son Jaim (a play on the French j'aime, meaning "I love") as a single mom and began honing her cooking skills in her parents' kitchen. Along the way she also fell in love again, got married and, by 2010, was inviting friends over for supper clubs in their apartment in nearby Belfast. There she established her elegant but humble cooking style, using whatever produce was nearby and in season.

"When I started, I didn't believe in myself enough," she admits. "But I knew that if I was going to be making simple food, I had to find the best ingredients." French still considers herself more of a host than a cook. "I love caring for people," she says. "It's the setting of the table. It's getting the lights just right. It's the music. Watching everyone have that experience is my greatest joy."

For more of Erin French's story, pick up the latest issue of PEOPLE, on newsstands Friday.

Her dinners quickly grew in popularity, and the couple saved enough money to open a restaurant in 2012. It was an immediate success and attracted attention from all over the country—but behind the scenes her marriage was crumbling. "He put me down, made me feel foolish, emotional, young, dumb," she writes in her memoir.

She struggled with depression and anxiety, and prescriptions that helped her cope—pills like Xanax and Ambien—became an addiction. "I was hoarding them, trying to get multiple prescriptions from one doctor or another because it was the only thing that made me feel okay," she says. "I wanted to drown it all out."

In 2013 she checked herself into rehab and got clean, but her fight was far from over. A few days into her two-week treatment, French learned that her husband had secretly closed their restaurant and changed the locks. "It was sort of that awakening moment, when you realize all your fears were true," she says. "Because you want to believe, like, 'Well, maybe he is a good person.' "

Debt, divorce and a custody battle with her ex-husband over Jaim forced French to move into a cabin on her parents' land. She converted an old Airstream into a mobile kitchen she jokingly dubbed "the divorcemobile" and started cooking for people again.

"Walls had never defined me," she says. "It was what I brought to the table that defined me." A year after she'd been in rehab, French opened the Lost Kitchen inside a restored gristmill "in the middle of nowhere." She was also granted joint custody of Jaim.

By 2016 French had been nominated for a James Beard Award and welcomed celebrity guests like Martha Stewart. "Reservations got out of control. We couldn't handle it anymore," she says. She decided to ask people to send a postcard to be entered into a table lottery. She receives more than 20,000 cards a year, making it one of the hardest-to-book restaurants in the country. When the pandemic put her business at risk of closing, French adapted to include an online market to stay afloat. "I was like, 'You're an old pro at this. You've lost everything before. Let's do it again,' " she says. Now she and her team—an all-women staff, many of whom returned from her first restaurant, and her mom, the restaurant's sommelier—are preparing to reopen for the season.

A key part of her "village" is her new husband, Michael Dutton, a media executive, whom she met on match.com and married in 2018. "I was fearful no one would ever love me again. I felt tainted," she says. "But the relationship I'm in now—he's so supportive and is never trying to put a cap on me."

It's been a long road, but French says she wouldn't change a thing about her life—and she only needs to look out the window at Freedom Falls if she loses faith in herself: "It's those moments of difficulty that shape us. We don't like it because it feels uncomfortable. But that's where you find out what you're made of."

If you or someone you know is struggling with addiction, please contact the SAMHSA substance abuse helpline at 1-800-662-HELP.