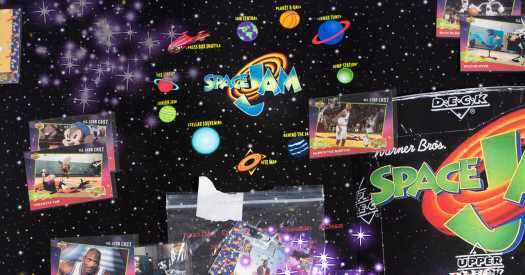 Every three hours, every day, for the past seven and a half years, an anxious, spirited Twitter bot has transmitted a short message of perseverance and hope into the universe.

To date, the bot, @SpaceJamCheck, has assured a changing world more than 20,000 times that the official website of the 1996 live-action/animated sports comedy “Space Jam” remains a functional web destination. If it surprises you to learn that people care whether or not the promotional website for a mid-90s children’s movie is still online, congratulations — you’ve just revealed your utter, humiliating ignorance about all matters relating to the mildly famous “Space Jam” website.

The 1996 “Space Jam” website is important in the way antique maps are important — not because they are necessarily useful tools for present-day navigation, but because they reveal the boundaries around which people’s lives were once oriented, and invite us to remember, or imagine, a world differently arranged.

Many years past its original relevance (of which there was never terribly much, this being the official website of the 1996 live-action/animated sports comedy “Space Jam”), the “Space Jam” website now serves as a virtual portal to the 1990s. The home page — a low resolution star-speckled black galaxy whose flat cartoon planets are slapped, like stickers, around the “Space Jam” logo — is not a nostalgic recreation. It is the real thing, beautifully preserved in the resin of digital time — a visual artifact from a less connected World Wide Web.

Today the internet is dominated by overlapping social platforms. But the “Space Jam” website, which existed before Google, harkens to an era when the web felt more like an infinite archipelago of islands to which one might surf in pursuit of one’s passions — or by accident. 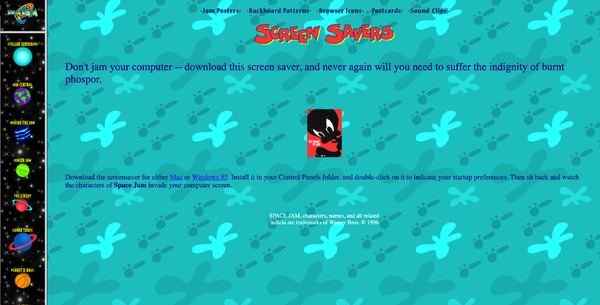 (The plot of the film, recounted in great detail on the website, centers on a basketball match that pits Michael Jordan and the Looney Tunes against a team of aliens who aim to capture them and force them to work as entertainment “slaves” at their “Moron Mountain” amusement park located in outer space. It was the 15th best-performing movie of 1996, earning slightly more domestically than “Mr. Holland’s Opus” and far less than “The Nutty Professor.”)

To be sure, it’s unlikely many children of the ’90s spent their free time reading the lyrical development narratives of characters like Elmer Fudd posted on the “Space Jam” website. (“Without changing the basic nature or concept of the character, his directors and animators finally developed him into a creature capable of great elasticity,” the copy explains.) At the same time, kids with cable television were almost certainly aware of the film.

But while the film faded from the memories of millennials as they aged, its virtual altar remained accessible and relatively pristine.

The website catapulted to meme status in 2010, apparently after a Reddit post drew users’ attention to its inexplicable continued existence. A few years later, Rolling Stone published a lengthy, definitive history of the site — a tale of survival in the face of the internet’s rapid evolution.

People’s favorite thing about www.spacejam.com was simply that it was. (“This is like finding King Tut’s tomb of my childhood movie recollection,” wrote one Reddit user.)

The “Space Jam” bot continued to sound its mournful toll for three days, at which point a human, Colin Mitchell, the bot creator, stepped in. The “Space Jam” website was still whole, Mr. Mitchell tweeted, but had moved to a new URL: www.spacejam.com/1996.

The original domain had been repurposed to advertise a new “Space Jam" film, scheduled for release on July 16.

(In the new version, the basketball star LeBron James joins forces with Bugs Bunny and the rest of the Looney Tunes to free himself and his son — by means of a basketball game — from imprisonment in a virtual world. The new “Space Jam” website describes this as “the highest-stakes challenge” of LeBron James’s life.)

The website for “Space Jam: A New Legacy,” is — at least at present — modern, minimal and much less clickable than its predecessor. The landing page features a crisp image of Mr. James and Bugs Bunny clutching basketballs in silhouette. An image of the classic “Space Jam” logo, located in the upper-right portion of the screen, functions as a button back to the 1996 website.

“I think big feature-heavy movie websites are a thing of the past,” said Don Buckley, who worked as the vice president of advertising and publicity at Warner Bros. at the time of the original film’s debut.

Social media, he said, has negated the usefulness of most flashy movie websites.

“A distributed content model online is a much more effective means of marketing and communication,” said Mr. Buckley. (Indeed, the main event of the new Space Jam page is an embedded YouTube trailer for the film.)

Mr. Buckley was an early proponent of movie websites as promotional tools. It was he who enlisted a small, largely autonomous team of web producers and designers — Dara Kubovy-Weiss, Jen Braun, Michael Tritter and Andrew Stachler — to create a richly detailed online hub for all things “Space Jam.” The website took shape in an office in midtown Manhattan, far from the influence of studio executives and other producers.

Online media, said Mr. Buckley, “was clumsy and adolescent, just like us.”

“We were exuberant about its possibilities. And, you know, we were kind of subversively thumbing our noses at all the skeptics,” he said.

At the time, few people in the publicity industry understood how to create websites — and “nobody who wasn’t doing it could fake knowing it,” said Mr. Buckley.

“Space Jam happened at a moment in time when the internet was still whispering its promise.”

Ms. Kubovy-Weiss, who was a producer on the website, and is now the director of a branding consultancy, said that at the time she worked on the site, not many people in her life visited websites or had an appreciation for the internet. The lack of familiarity — and oversight — allowed the design team to experiment.

“We were able to sort of take risks and do things that we thought were funny or interesting or cool without having to go through the channels that a more mainstream marketing effort would have required,” said Ms. Kubovy-Weiss.

These included a secretive effort to sprinkle Easter eggs — or hidden interactive features — throughout the website. Two decades later, members of the design team, who keep in touch via a group text assembled after the website’s unexpected popular resurgence in 2010, still won’t confirm how many of these are buried within the html. Fans have discovered at least some. (For instance, clicking on the letter “y” in one publicist’s name on the credits page automatically downloads an audio clip of a voice croaking the word “Yeah.”)

Mr. Tritter, who, at 26, was declared associate producer of the site and is credited by the web team with writing most of its snarky text, remembers not being particularly excited for the movie, which was aimed at a generation now known as “millennials.”

“Gen X kids were not the target audience,” said Mr. Tritter, now 51 and a music producer and writer in Los Angeles. The film and website were designed for “kids who were kind of growing up on the internet for the first time,” he said.

Years ago, Mr. Tritter was having drinks with some acquaintances at the SXSW music festival when one of them mentioned to the group that Mr. Tritter was “O.G. internet,” and had helped build the website. A younger attendee appeared shocked and impressed. Mr. Tritter thought he was kidding.

That was the first time he understood, said Mr. Tritter, “that something I found hilarious — they actually thought it was cool.” He had regarded the newfound obsession with the website as somewhat ridiculous. But, “a whole generation younger than us is like, ‘No, no, no, that’s actually something that we were all really into at the time.’”

“I realized I was among millennials and that they were different from me,” he said. The friend who had broken the news to the group said he “went into a thousand yard stare and muttered ‘this will define my life.’”

Curiously, while the original audience of millennials approaches middle age — the oldest members of that cohort will turn 40 this year — fans of the 1996 “Space Jam” website seem only to get younger. For Ripley Heator, 19, an animation and game arts student in Philadelphia, the source material is besides the point. He discovered the site in 2020; its features and layout influenced a project for his web design class.

“I don’t have many memories of this movie,” said Mr. Heator. “I’m mostly just a fan of the site.”

Mr. Mitchell, 45, created the @SpaceJamCheck bot account in the fall of 2013, with the expectation that it wouldn’t tweet forever.

“I was happy to make a Twitter bot that would be around for what I assumed would be the inevitable day that it would go offline,” he said.

When the site was moved to its new URL, fear erupted in the bot’s mentions from fans who thought the day had come. Mr. Mitchell, who works as a web developer in Montague, Mass., began questioning, as @SpaceJamCheck, whether it was even worth continuing the watchdog account.

“I tweeted as the bot, like, ‘Hey I’m thinking about shutting this down’ and I got a lot of responses that people didn’t want me to,” Mr. Mitchell said. “I guess they still see some value in it.”

He has mixed feelings about that: “It’s OK to let go of things, but at the same time, this has become a really important part of internet history.”