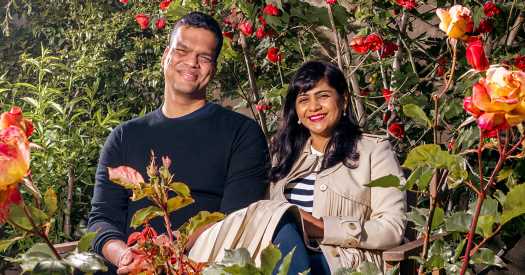 To land Elon Musk, who appeared on their Clubhouse program last February, the couple texted him. They had met Mr. Musk several years ago during a private tour of SpaceX’s headquarters in Hawthorne, Calif.

A week later, Mark Zuckerberg dialed in to discuss the future of augmented reality. The Facebook founder was another easy get: He was a colleague at the time.

And to lock in Virgil Abloh, who appeared on their show in April to discuss the influence of internet culture on his Off-White label, they went to their mutual friend, Imran Amed, the founder of The Business of Fashion.

Sriram Krishnan and Aarthi Ramamurthy are the well-connected husband-and-wife hosts of “The Good Time Show,” arguably the most influential show on the social audio app Clubhouse, at least among Silicon Valley movers and shakers.

Started in December, the show has 175,000 subscribers. Fans include Calvin Harris and Paris Hilton, and just about anyone who wants to hear tech entrepreneurs discuss cryptocurrency buyouts or the latest wrinkle in human-robot relations.

Three nights a week (the schedule is random), the roughly hourlong audiocast combines the casualness of a conference call among tech titans with the friendly small talk of happy hour. The show starts around 10 p.m. West Coast time, or whenever they’ve put Indra, their 2-year-old daughter, to bed.

Shows are live and prone to technical snafus. In an episode from January, the former Microsoft chief executive Steve Ballmer had to be reminded to mute himself because of background noise. Mr. Ballmer, it turns out, was phoning in from his hot tub. “I don’t know if you can hear the water splashing, but I have to say, it’s a pretty good way to do a discussion,” he said.

In person, Mr. Krishnan, who stands at 6-foot-6, and Ms. Ramamurthy, who is 5-foot-3, have a charmingly mismatched visual appearance. But they share the same age (both are 37) and a friendly bedside manner that allows them to make even the cagiest of chief executives feel at home.

On a crisp April afternoon in San Francisco, the couple settled into a picnic table outside La Boulangerie, a French cafe near their house in the city’s Noe Valley neighborhood.

“We’ve always been obsessed with the stories that make the people,” said Mr. Krishnan, who wore a hooded sweatshirt with the diamond logo for Jemi, a free website builder. (Both are angel investors in the start-up, naturally.)

Ms. Ramamurthy, who wore an ankle-length camel coat from Comptoir des Cotonniers, nodded in agreement. “We get so many DMs and replies from people starting out their careers in India, or some other country where it’s really important to see somebody like me or Sriram,” she said. “You know, you look like me and you have an accent.”

Both were born in Chennai in South India, where they were raised in “typical middle-class Indian upbringings,” Ms. Ramamurthy said, but did not meet until 2003, when they were in college studying to become software engineers.

A mutual friend added them to a Yahoo! chat room to help with a coding project. The collaboration fizzled, but the couple continued swapping messages despite having no idea what the other one looked like.

“When we tell people we met online, everyone thinks it’s a dating app,” Ms. Ramamurthy said with an amused sigh.

Not long after, the couple caught the attention of S. Somasegar, the storied Indian American technology executive, who was at Microsoft at the time. Impressed by the gawky digital savants, Mr. Somasegar hired them both in 2005.

“A lot of people in the industry join companies like Facebook or Twitter and are happy to be there for decades,” said Mr. Somasegar, who spent 27 years at Microsoft before joining Madrona Venture Group in 2015. “But Sriram and Aarthi are not content with the status quo. They have a restlessness that drives their curiosity and a need to ask questions.”

The pair became romantically involved in 2006. The following year, they relocated to Microsoft’s American headquarters in Seattle. They eloped in 2010 and moved to Palo Alto a year later.

Mr. Krishnan went on to hold managerial positions at Twitter, Yahoo, Facebook and Snap. Earlier this year, he was hired as a general partner at the powerful venture capital firm Andreessen Horowitz, one of Clubhouse’s lead investors. “When I meet founders now, they feel like they already ‘know’ me from listening to the show, and that really helps,” he said.

Ms. Ramamurthy worked at Netflix before introducing two start-ups: True and Co., a lingerie e-commerce site in 2012; and Lumoid, a service that allows people to try gadgets before buying. She went to Facebook in 2017 as a product director before leaving in May to head up Clubhouse’s efforts to expand to other countries. As with Clubhouse’s other 40 employees, she will receive equity.

Clubhouse now enjoys a market valuation of $4 billion, but its metrics fluctuate wildly. At its peak in February, it had about 10 million global downloads, according to the app analytics firm Sensor Tower, largely thanks to the appearances by Mr. Musk and Mr. Zuckerberg on “The Good Time Show.” That number nose-dived to around 900,000 downloads in April — a free-fall of about 90 percent. The release of an Android version in May helped reverse the slide, with around seven million downloads in June, according to Sensor Tower.

The couple are not concerned about headlines declaring that “the Clubhouse party is over” or competition from companies like Spotify, which recently announced its own live audio hub, Greenroom.

“If you look at Facebook from 16 years ago or Twitter from 12 years ago, those platforms are going to be unrecognizable from today,” Ms. Ramamurthy said between sips of tea. “Clubhouse is just one year old. I have so much faith in the platform that I literally left my job to work there.”

“We would do a few laps around his house — I’m sure people thought we were sick,” Ms. Ramamurthy said, appearing slightly mortified.

With a big smile, Mr. Krishnan placed his hand on his wife’s shoulder. “We really have been fanboys forever,” he said. “What else can we say? We just love tech.”