DEBORAH James has urged people to talk about their poo, because it could save a life from bowel cancer.

The Sun columnist says she does not want anybody else to be diagnosed at a late stage of the disease like she was in 2016 because they were not aware of the signs. 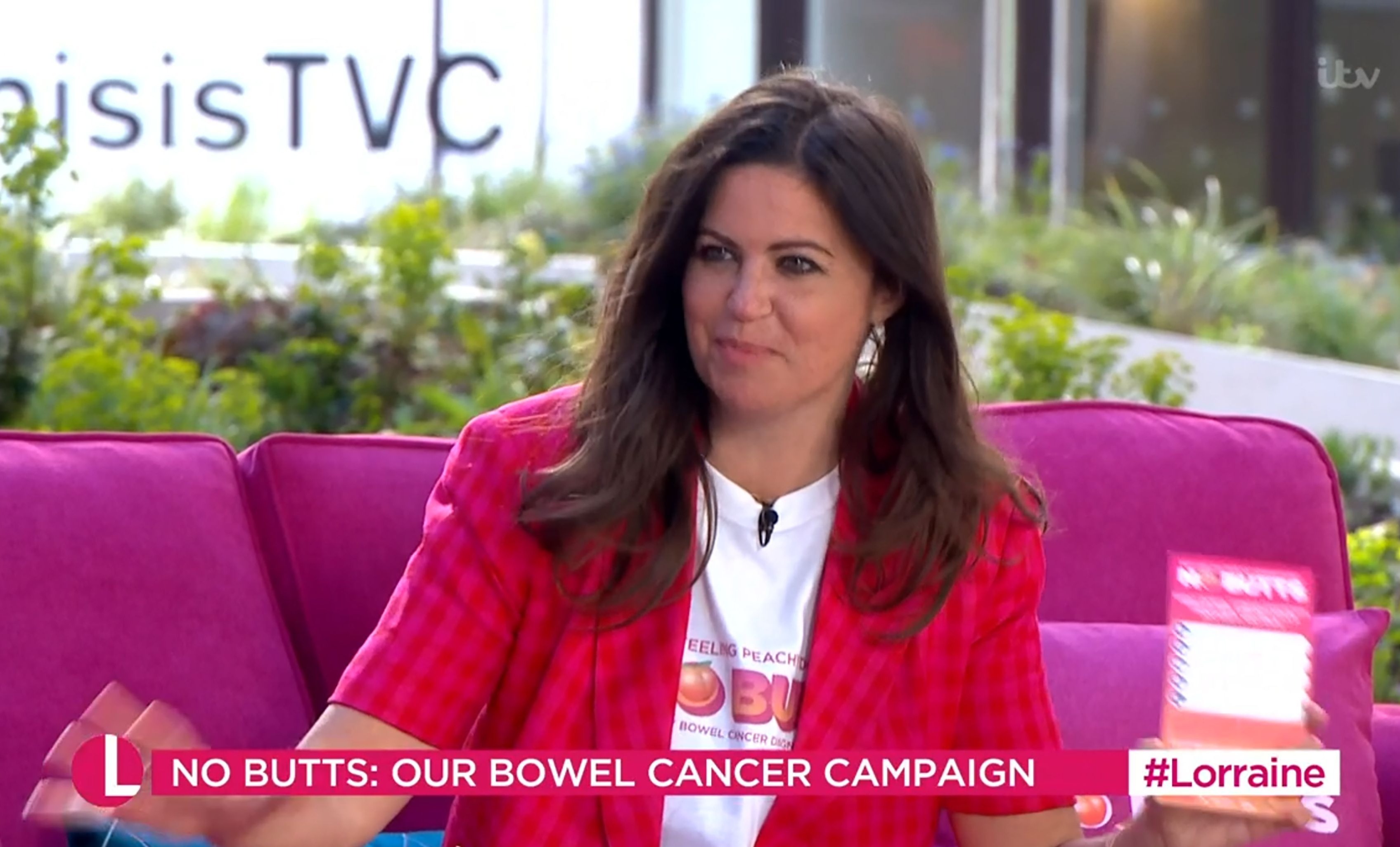 The mum-of-two was just 35 years old when she was diagnosed with bowel cancer, making her one of 42,000 cases in the UK that year.

She had changed bowel habits for a year, as well as weight loss, fatigue and passing blood, before she finally got her diagnosis.

The other key signs of the disease is a lump of pain in the stomach.

Free NHS screening for bowel cancer is only given to people over the age of 60 in England and Wales.

The Sun’s No Time 2 Lose campaign has been calling for screening to be rolled out to those in their 50s in England and Wales for three years alongside Bowel Cancer UK.

A victory was reached when the NHS confirmed it would lower the age from 60 to 50 in 2018, but it is yet to be implemented.

Now 39 and living with stage 4 bowel cancer, Deborah says knowing the signs of the disease could save potentially thousands of lives.

The Bowel Cancer UK patron said: “Of course cancer is this big scary word. But actually the earlier it's caught the better chance of survival.

“I'm really grateful to be alive but unfortunately my cancer was caught at a later stage and I don't want that to happen to anybody else.”

However, it shouldn’t be because it is treatable and curable especially if diagnosed early.

But without knowing the signs, people run the risk of a late diagnosis.

Only 15 per cent of cases are found early in England.

What are the symptoms to look for? Remember “BOWEL”

There are several possible causes of bleeding from your bottom, of blood in your poo.

Bright red blood could come from swollen blood vessels, haemorrhoids or piles, in your back passage.

Dark red or black blood could come from your bowel or stomach.

Blood in your stools is one of the key signs of bowel cancer, so it's important to mention it to your doctor so they can investigate.

It's important to tell your GP if you have noticed any changes in your bowel habits, that lasts three weeks or longer.

It's especially important if you have also noticed signs of blood in your poo.

You might notice you need to go to the loo more often, you might have looser stools or feel like you're not going enough or fully emptying your bowels.

Don't be embarrassed, your GP will have heard a lot worse! Speak up and get it checked.

This is less common than the other symptoms, but an important one to be aware of. If you've lost weight and don't really know why, it's worth mentioning to your GP.

You may not feel like eating, feel sick, bloated and not hungry.

Bowel cancer that causes bleeding can cause a lack of iron in the body – anaemia. If you develop anaemia you're likely to feel tired and your skin might look pale.

As with lots of other forms of cancer, a lump or pain can be a sign of bowel cancer.

It's most likely you'll notice a pain or lump in your stomach or back passage.

See your GP if it doesn't go away, or if it affects how you eat or sleep.

Deborah has teamed up with ITV’s flagship morning show Lorraine to launch a brand new health campaign called "No Butts" to run across the month.

The initiative will educate viewers on the signs and symptoms of Bowel cancer by urging them to stop feeling embarrassed when it comes to talking about poo.

Speaking of her own symptoms, Deborah said on the programme this morning: “One of my first symptoms was blood in poo. And I kind of missed it; it was haemorrhoids or something else.

“But ultimately it was my body saying there is something wrong, go and get checked.

“You always kind of put it down to other reasons.

“I was really tired,  but of course I was tired – I was a busy working mum of two. There is always an excuse. But when it comes to health, there shouldn't be any excuses.

“With bowel cancer especially, the key thing is when it's caught early it's curable.” 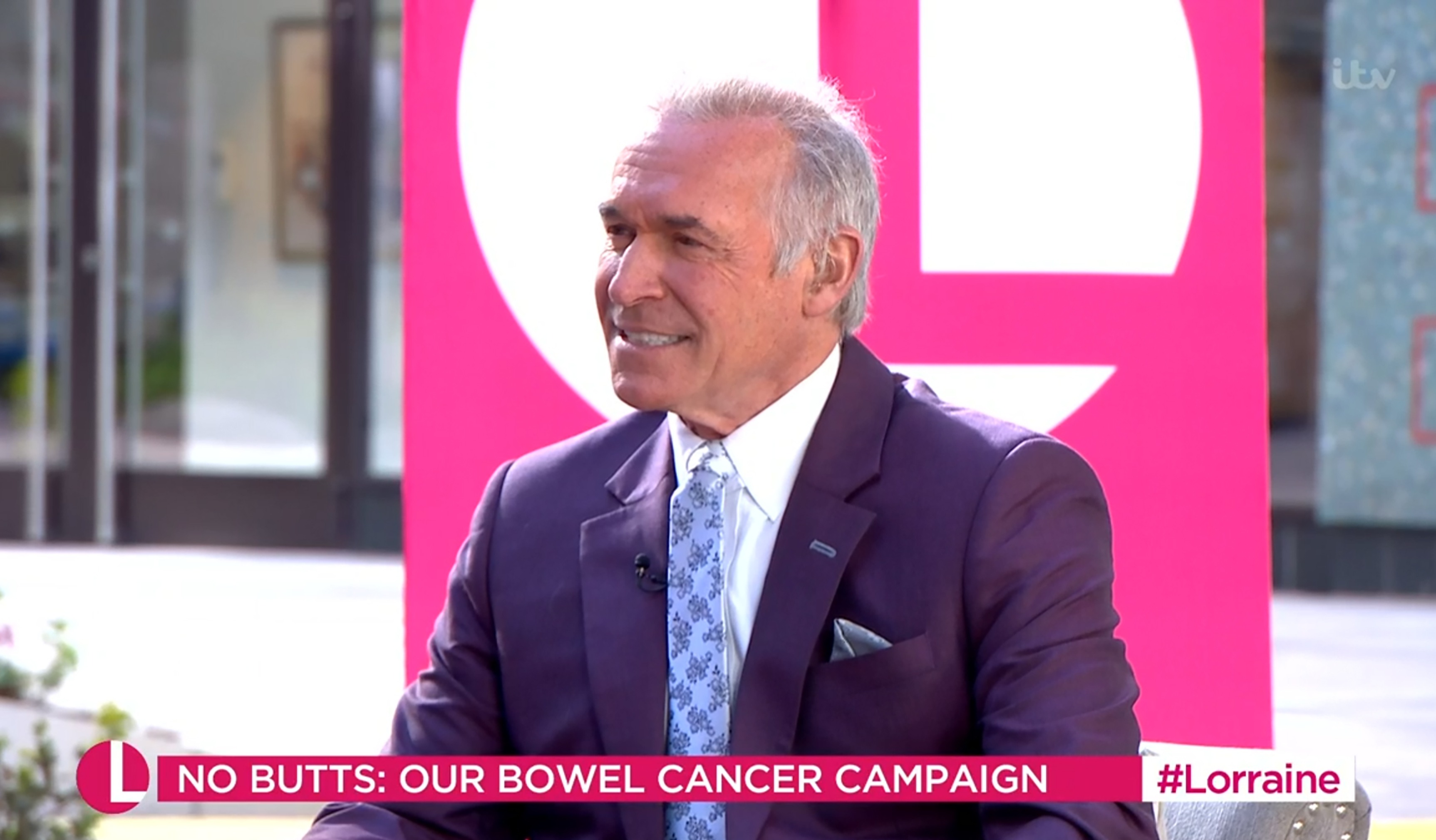 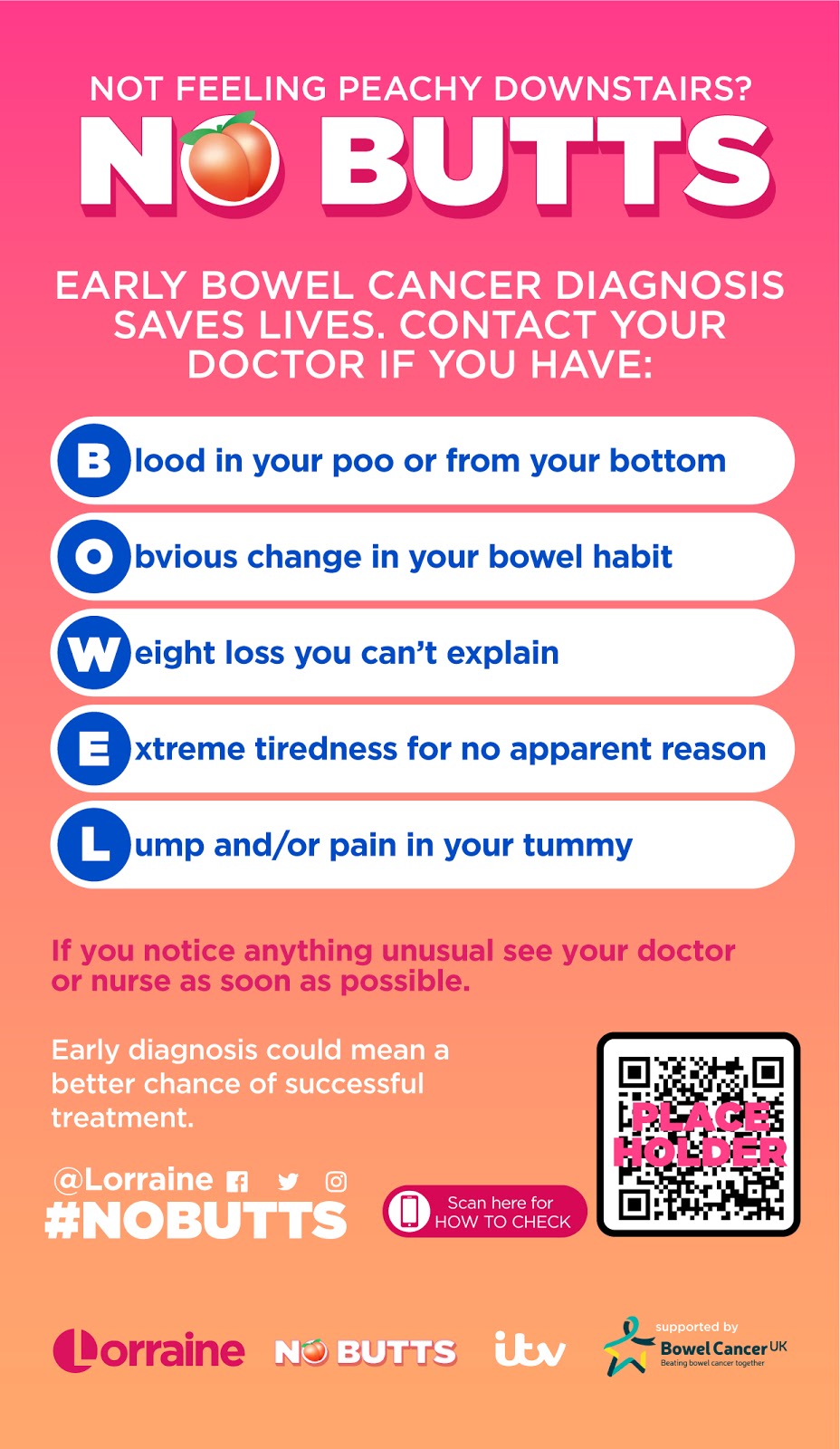 Alongside her was TV doctor Dr Hilary Jones, who said: “We want everyone to become mini doctors in a way by learning these very few and simple main symptoms.

“16,000 lose their lives every year from bowel cancer… We could prevent a lot of those if only people knew to look at their poo and report any symptoms that they have.”

The campaign has made the acronym BOWEL to remember the symptoms of the disease.

B is for blood in your poo or from your bottom, O is for an obvious but unexplainable change in bowel habits, W is for unexplained weight loss, E is for extreme tiredness and L is for a lump or pain in your stomach which can give the feeling of fullness.

Dr Hilary added: “Look at your poo. If you're an observer, you'll live longer than a non observer.

“I know GPs say they are open for business, but people are saying to me I still can't get an appointment. You can and you must.

“Be assertive, get on the phone and make that appointment whether it's video or online or whatever. Then you go to the surgery and get a simple test for blood in the motions, and then if necessary ongoing tests after.

“[There] is nothing to fear, it could save your life.”

Deborah, who is keen to make it to her 40th birthday this year, added: “We shouldn't be embarrassed ultimately, should we? Even our favorite celebrities poo.

“We should talk about it, our kids talk about it. When we become adults we suddenly stopped talking about our poo.”

Deborah’s battle with bowel cancer has led her to become a face for the disease in the UK, sharing her experience through social media as “Bowel Babe”.

She has bravely taken Sun readers on her journey at every stage in her column, Things Cancer Made Me Say, while also hosting BBC's You, Me And The Big C podcast.

She has been told twice she is "cancer free", the last being January of 2020 when Deborah said there was "no evidence" of the disease in her body.

But her cancer reappeared in May last year, when two cancerous lymph nodes were found and removed.

She is now having treatment every week, but alone due to Covid restrictions.

Deborah has spoken candidly about "living way past my sell by date", given the low survival odds of her rare type of bowel cancer.

Only 10 per cent of people with stage 4 bowel cancer survive five years or more.

And Deborah has a rare mutation which becomes used to treatments quickly, leaving little options.