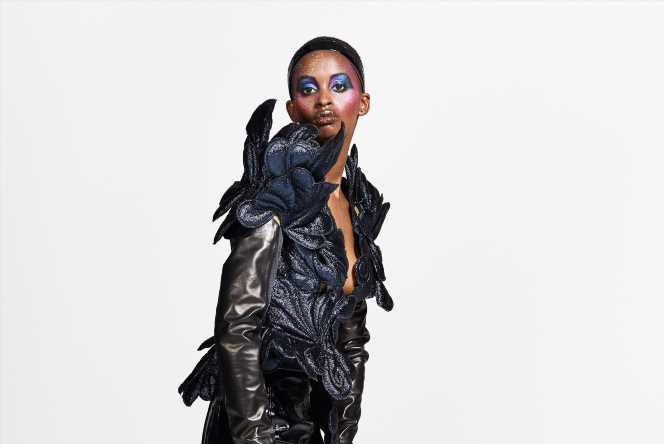 Less has always been more from Ronald van der Kemp’s perspective — conceptually, rather than aesthetically, let it be said. The Dutch designer pushed his waste not, want not creative ethos to new lengths this season, building his collection for the third time in a row without sourcing a single piece of fabric or component externally, working only with what was around the studio to create his quirky, hedonistic silhouettes. “We tried to get inspired by the limitations,” van der Kemp said during a preview. “Because of the limitations, you do things you would never think of otherwise.”

That resulted in a heightened level of intricacy in his sculptural, ’80s-inspired silhouettes, many of them worked up from tiny scraps of fabric, reams of chain fringing and jewelry like embellishments made from scraps of plastic and gold leaf. A minidress had a bodice made from a patchwork of pin-tucked panels of printed muslin and a shorter-than-short skirt made with ruffles of pleated fabric. For a white lace blouse, there was not enough fabric left to create the sleeves as well as the bodice. As such, appliqué motifs made from leftover scraps were encrusted into the piece’s gauzy zeppelin arms. The feathers on a glam evening coat, meanwhile, were cut out by hand from pieces of organza and muslin, each one individually sewn on, while a similar effect was used to create the impression of snakeskin on a pencil skirt. A faulty piece of white velvet was painted by hand with bright motifs and given padded sculptural shoulders on a long, graphic shift dress.

Van der Kemp worked with students from Amsterdam’s Jean School to create several looks, resulting in an asymmetric skirt woven from strips of cloth stitched on belt-loop machines and a “fur” coat made from scraps of the fabric on a bridal lace base.

There was also a dress crafted from laser-cut rounds of felt made thanks to the designer’s partnership with I-did, which recycles old uniforms to give the fabrics a new life. The project was initiated in van der Kemp’s spring collection with a molded felt bodice recently modeled by Gwen Stefani in a magazine shoot. The designer plans to expand this activity in the coming months with an initiative called Trashur, for which he is studying the business case in partnership with The Hague Business School, with the intention of launching an accessories brand using the fabric. “The idea is to have a solution for textile trash and to make it accessible and cool,” he explained.

For his core collection, however, raw materials are finite — a clear parallel with the earth’s natural resources, one might say. “I think I could still do another collection without buying anything,” van der Kemp said. From constraint comes creativity in abundance.