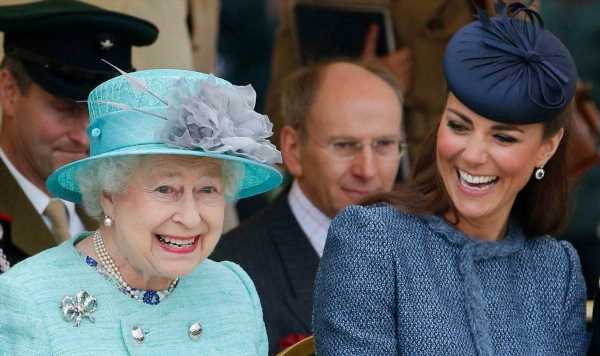 How to recreate Kate Middleton’s curls in 5 minutes

Kate, Princess of Wales, often wore a trend the Queen was said to dislike. Although it isn’t known whether the then Duchess did it in the late monarch’s presence, she has followed the trend on multiple occasions over the years.

The Princess of Wales has a penchant for the espadrille trend, which the Queen is understood to have disliked.

Espadrilles are a practical summer shoe which were first developed in Spain. They are usually made of black or coloured leather or cotton, with a straw-like sole.

The espadrilles Kate has worn in the past have all had a chunky, wedge heel, making them wedges.

Back in 2015, a royal source told Vanity Fair: “The Queen isn’t a fan of wedged shoes.

“She really doesn’t like them and it’s well known among the women in the family.”

Despite this, Kate has worn espadrilles many a time over the summer. Fashion expert and celebrity stylist Samantha Harman told Express.co.uk this might be because they are “the perfect summer shoe”.

“You can get a bit of height, which makes them great with maxi dresses or wide-leg trousers, and you can walk in them,” she said.

“Nothing worse than a summer blister. Kate Middleton has even been seen running whilst playing with her children in hers.”

Samantha continued: “Kate repeatedly wore the ‘Fleur’ style from Monsoon in her early days as a royal, but did get them back out again for an event in 2019.

“Most of the royal women have been spotted in espadrilles at some point or another – but the Queen never was.

“Her Majesty reportedly hated wedge shoes. It’s been reported that other royal women couldn’t wear wedge shoes in her presence.”

But Kate isn’t the only royal to be a fan of the trusty espadrille. Other British royals to have worn them in the past include Lady Amelia Windsor, Meghan Markle, and Princess Diana. Kate may have been inspired by her late mother-in-law when she first wore espadrilles as a royal.

“Espadrilles are great for dressing up or down – Lady Amelia Windsor even wore them to a wedding in 2019,” Samantha noted.

“And I think it’s the versatility that makes the espadrille a popular summer shoe choice with the royals.

“Whilst we’ve seen somewhat of a relaxation in all the fashion rules over the last few years, they do have to think about diplomacy and the message behind every single thing they wear in public.

“As with so many trends, where Diana went the world followed and she is probably the first example of a royal wearing espadrilles in public.”

Samantha added: “The Duchess of Sussex also made espadrilles a key shoe choice for the 2018 tour.

“My advice with espadrilles would be to go for a neutral – so tan, nude or black. They will go with everything.

“The great thing about a neutral espadrille is that it’s never going to go out of style.”

It is currently too cold for espadrilles but, come spring, they will be the perfect shoe to wear to ease into summer and the warmer months.