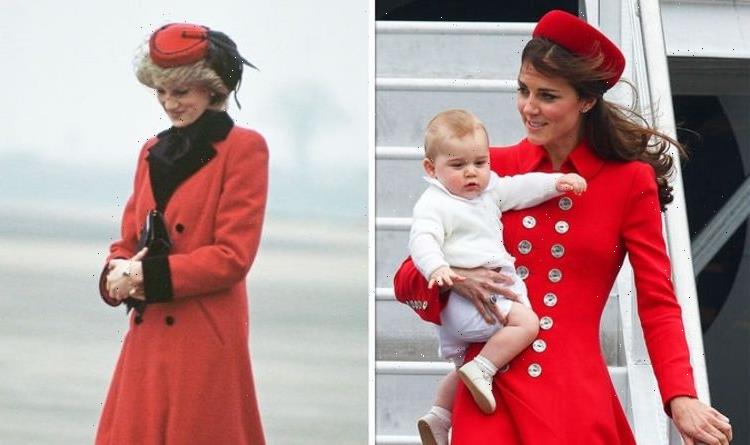 Kate Middleton has channelled Princess Diana’s style numerous times, to the point she has been seen donning almost identical outfits to the one’s Diana, Princess of Wales, once wore. But is the Duchess of Cambridge trying to emulate her style deliberately?

Fashion designer Melita Latham told Express.co.uk that both styles differ completely and that while “anyone can replicate Kate’s ensemble”, Princess Diana’s “presence” is impossible to emulate.

Melita said Diana “certainly had her own style. From her first unexpected appearance in the limelight, she had a particular style that shone, almost as much as her beauty.”

“She could have arrived at any engagement in an old sack, and would have the attendees in awe.

“Wearing khaki trousers and a white blouse, (and armour to protect her) while inspecting minefields, is a moment few will forget, but just as few would be able to make such an impression wearing similar,” the fashion expert explained.

“Rarely does this beauty, charm, presence and style appear in one, as perfectly as it did with Diana.

“A true ground breaking individual, in terms of what she accomplished as a princess and mother, but also, in her death, quite singlehanded modernising (almost demolishing) the royal family, almost over night.

“Quite remarkable,” she concluded.

About Kate’s style, Melita commented: “Kate is a classically beautiful woman, doting mother and admirable royal family member. Her dress sense is classic, and suits any and all occasions, obviously helped by her remarkable figure and beauty.

“Would Kate have made such an impact in the white blouse, I seriously doubt it,” said the fashion expert.

“Sure Kate is everything a princess, and one day a queen ought to be, of this there can be no doubt.

“Our first truly beautiful princess (as princesses are supposed to be in fairy tales), was Diana. She was the Model T.

“Of course 40 years later, Kate is no less of a princess, and in today’s fashion market place, anyone can replicate her ensemble,” she explained.

“If one can imagine them together today, as similar ages, you would be hard pressed to choose the more beautiful. Not at all difficult however, to realise just which has the most presence in the moment,” Melita said.

But is Kate trying to recreate that “presence”?

“I doubt Kate is trying to emulate Diana, if so then, that would be shame.

“She has a style of her own, clearly influenced by her own family. It simply can’t make up for the ‘first one’, the ‘prototype’ effect.

“In a land of horse drawn carriages, if you’ve just seen an automobile for the first time, you will remember that moment.

“However, in today’s world, full of cars, you have a job to remember which is which.

“In today’s celebrity hungry media society, there are many princesses out there, royal or not, and that I’m afraid, is where Kate lives,” Melita concluded.