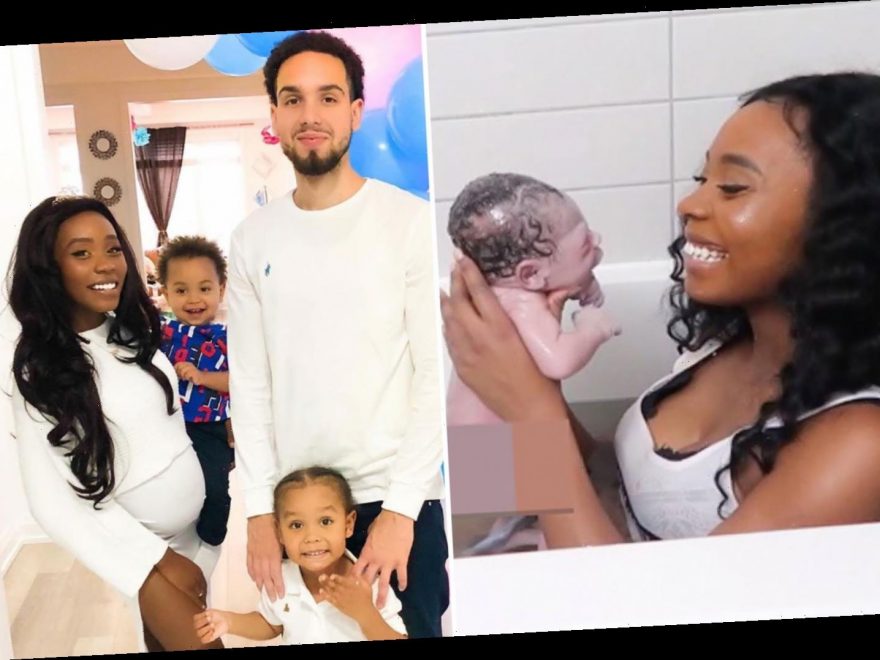 A YOUNG mum delivered her own baby in her bathtub while wearing a full face of make-up in front of an audience of 700,000 people.

Legaci Allong, 24, has been documenting her life on YouTube for the past four years, including a heartbreaking miscarriage, and filmed the arrival of her son in an unassisted, unmedicated, water birth at home. 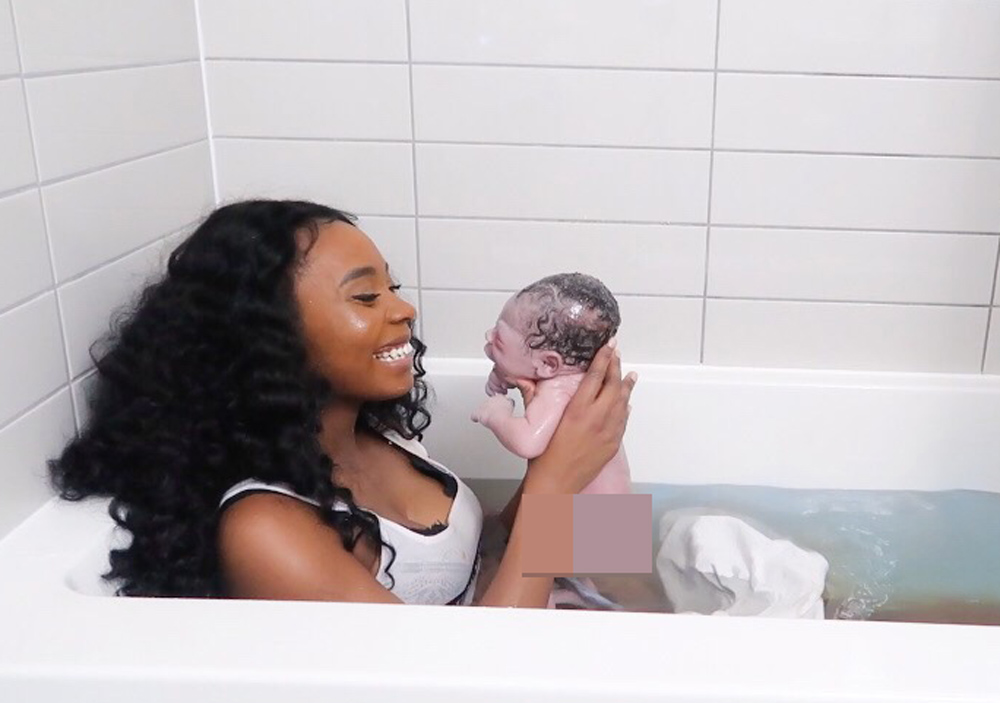 Her son Hero was born in January at her home in Ontario, Canada, after just two pushes – with a 21 minute video being uploaded online.

Legaci also shared tips for other mums on how to keep calm during labour, including “embracing” the pain of contractions by saying, "Yes," and "that feels good" out loud.

As a distraction from her intensifying contractions, she did her hair and make up and got dressed in a pre-chosen birthing outfit – a skirt and top with the slogan ‘The Natural Birthing Queen,’ her nickname on social media.

The mum-of-three -who has two other sons Prince, four, and Romeo, two, – with her partner, nutritionist and trainer Chazz Fall, 25- offers a raw look at motherhood to her hundreds of thousands of fans through her videos, and aims to empower women. 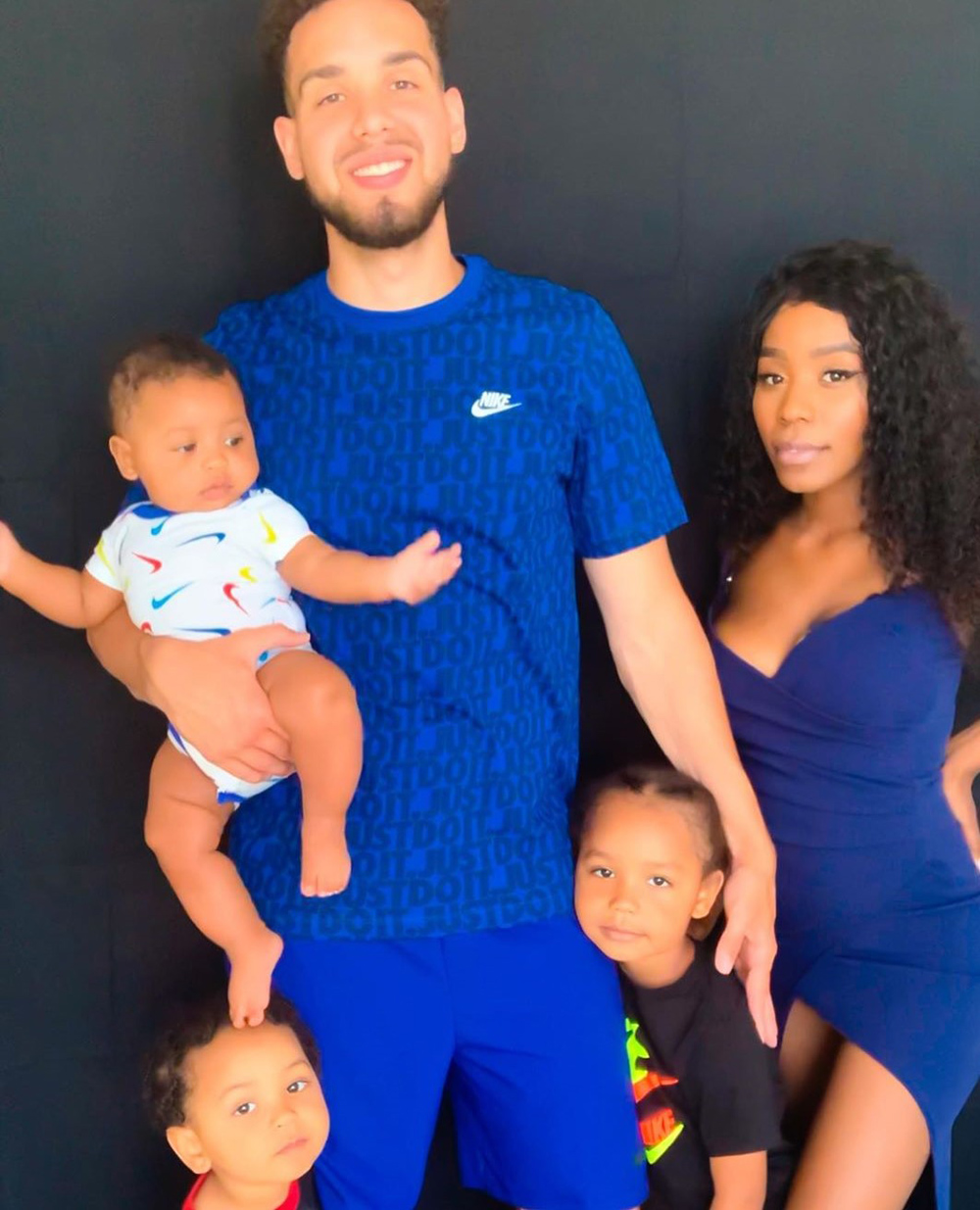 Speaking of her home birth, she said: “I wanted my childbirth video to go very in depth and give a real insight into what happens, how it feels, and how you keep calm.

“I want to inspire other women to make their own birth choices and to know that, no matter how difficult or painful it may seem, they can do it.

“Of course, giving birth on YouTube came with all these extra challenges and considerations, too – things you wouldn’t ordinarily think about during labour like lighting, battery life and angles, to make sure it’s all family friendly and there’s no nudity.”

As well as being a YouTuber, Legaci runs her own company offering virtual doulas to mums-to-be – supporting them through pregnancy and birth as well as offeringpre and postnatal support and birthing plans. 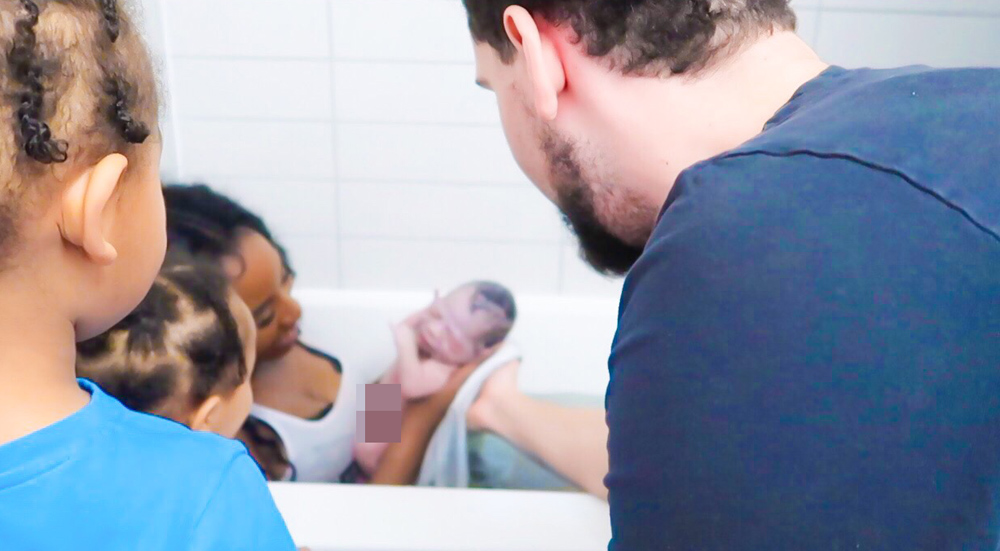 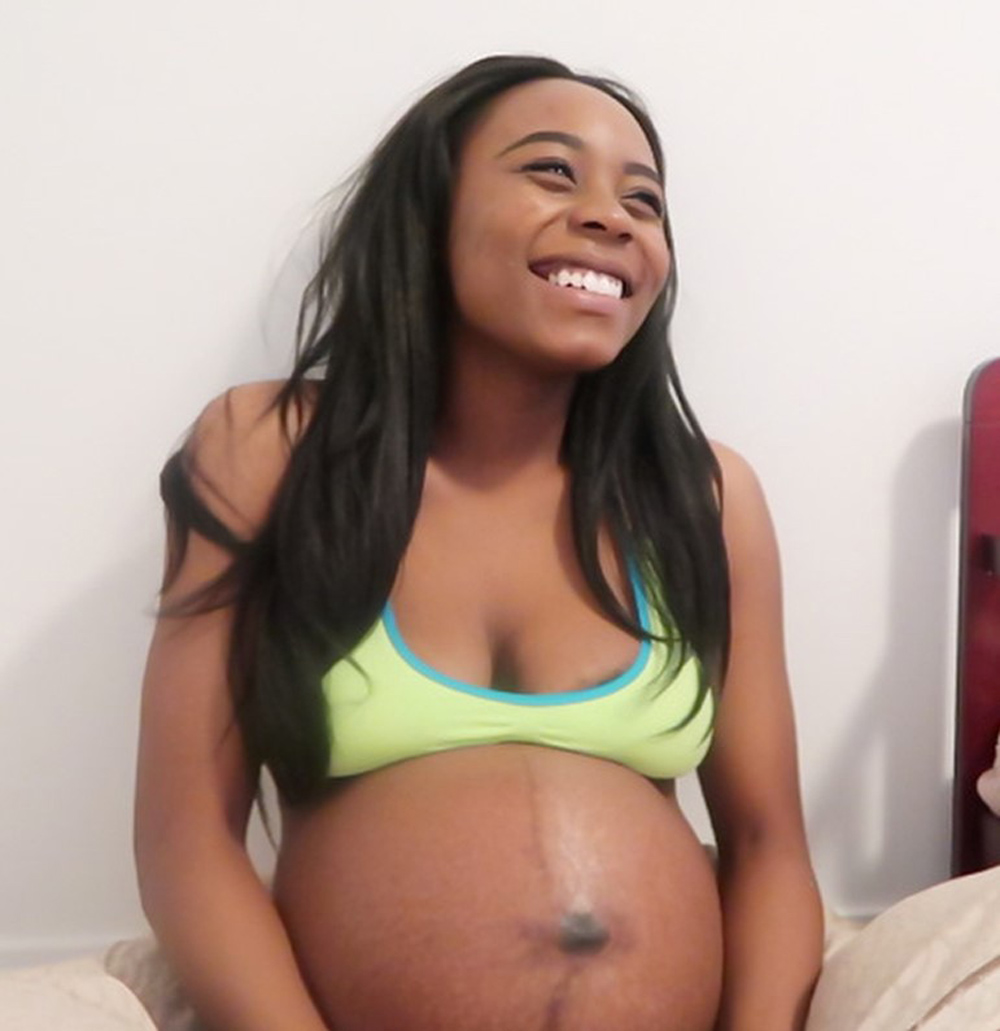 It wasn't the first time she'd given birth at home, though, as she also had a natural water birth at home for her first child, Prince, in November 2015.

She recalled: “I did it without any medication and felt really calm – even though it was my first.

“The midwives that were there with me were impressed, and kept saying, ‘You’re made to give birth.’”

Buoyed by their support, Legaci decided to set up a YouTube account in early 2016, where she could share advice about pregnancy and birth with other mums – and started posting daily videos when Prince was a few months old.

“The idea of putting myself out there like that took some getting used to,” she said. “I felt quite nervous at first, but in time, the camera because invisible. 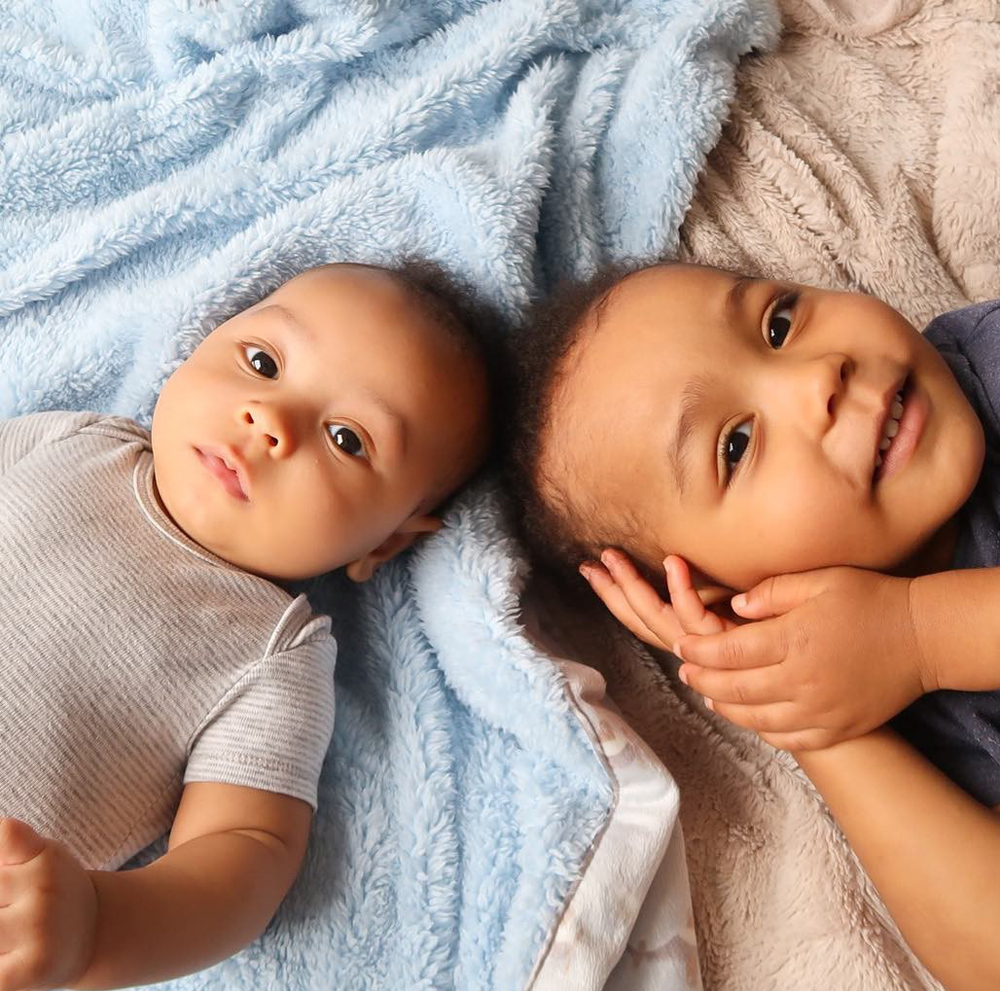 “Before long, I felt almost naked without it.”

In early 2017, Legaci discovered she was pregnant again, this time deciding to document every aspect of her pregnancy and birth.

She continued: “Chazz and I talked and decided to document the entire pregnancy. I really wanted to give women an honest look at what it’s like.

“Our followers that were watching along with us almost became like family.

"They were so excited about the birth – there was no way we weren’t going to show that, too.”

Following a textbook pregnancy, Legaci went into labour with her second baby, Romeo, on December 4, 2017. 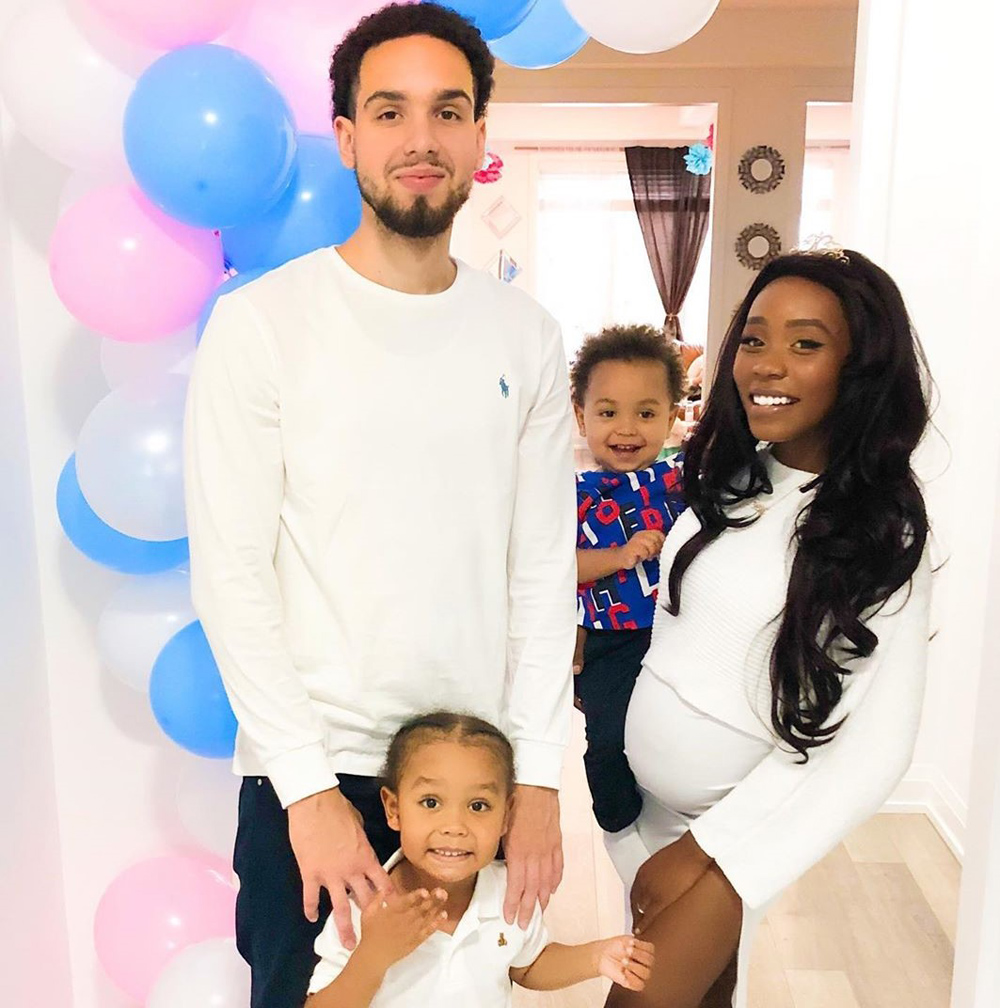 She continued: “My first birth had been pretty good and made me realise how capable I was, but it was also easier the second time round as I knew what to expect.

“For example, I knew for sure when I was having contractions.”

Again, Legaci gave birth naturally and without medication at home – this time requiring even less hands-on help from midwives, who were by her side throughout.

She added: “With each birth, I’ve pushed myself more and more. I’ve tried to be calmer each time and, after Romeo, I was determined to have a completely unassisted birth for my third.”

Legaci thought that opportunity would come in early 2019, when she fell pregnant for a third time. 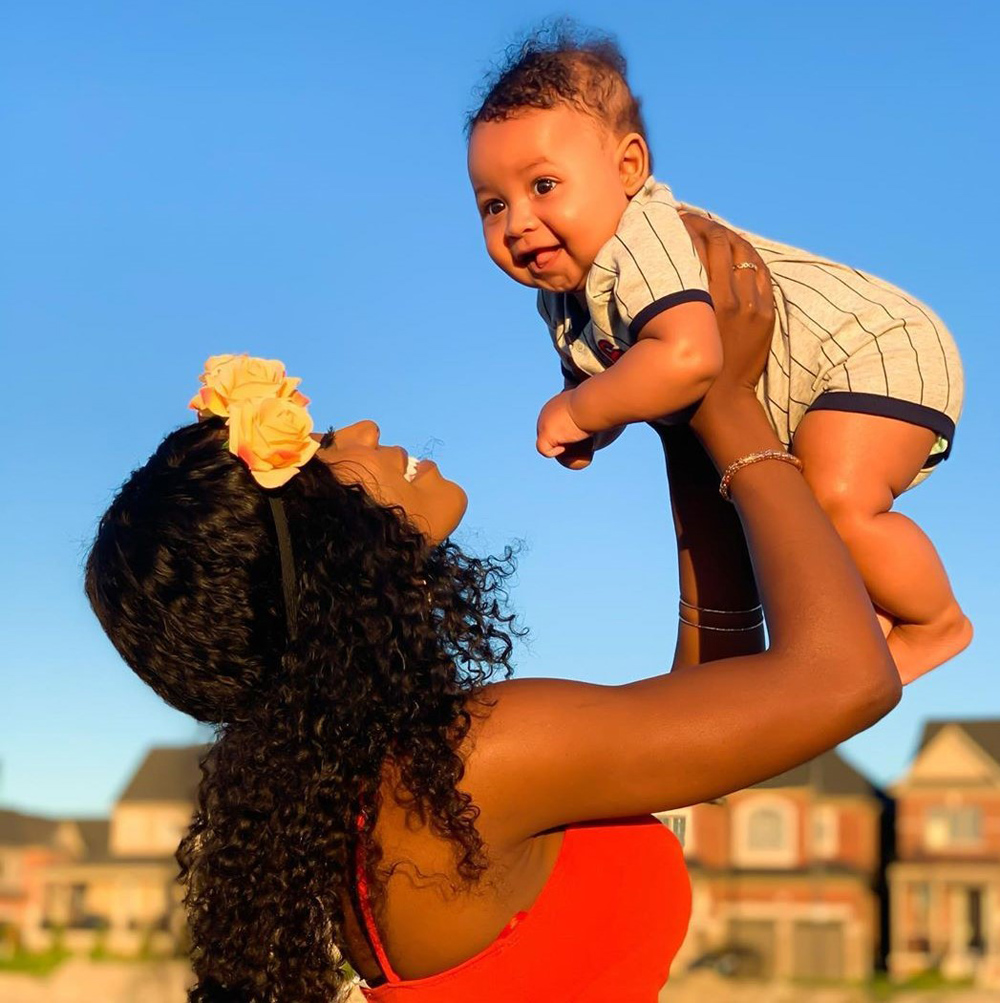 “I already had two boys, so I was convinced baby number three was going to be a girl. I was so happy,” she said.

But tragedy struck just before the 12-week mark in March 2019, when doctors discovered that she had lost the baby.

Rather than hide away, she made the brave decision to record a candid video about her experiences for YouTube.

She added: “Doctors don’t know why I lost the baby. I think it’s best not to go over every little thing and wonder if it was this or that – it’s not healthy.

“The loss showed Chazz and I that life is precious, and not every baby is guaranteed.

“It was hard on us as a family, and heartbreaking to share on YouTube. Even now, I struggle to watch the video back. 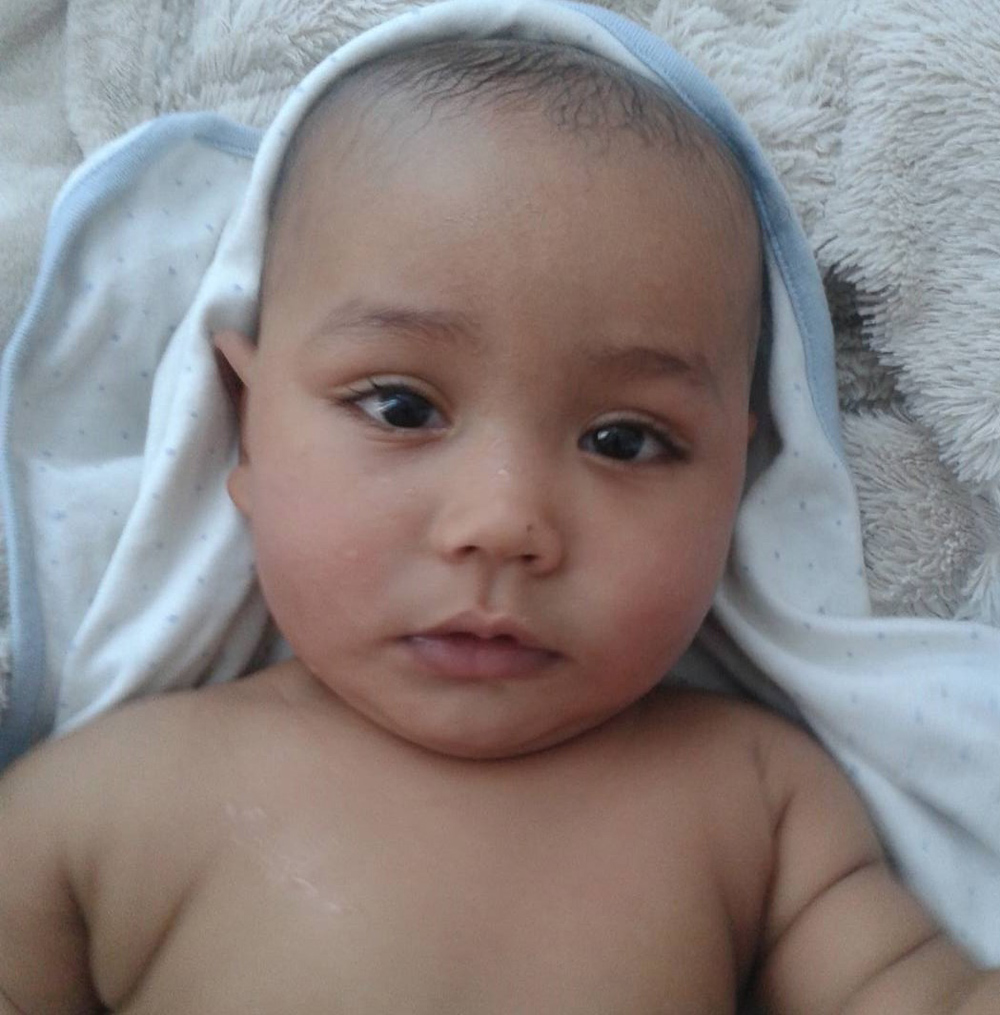 “But I didn’t do it for me. I did it for anybody else out there who may have been going through what we were, to show them that they are not alone, and that I can relate to what they’re feeling.

“I wanted them to know they had me to be a friend to them and help them overcome the pain.”

The following month , in April 2019, Legaci found out she was pregnant again.

This time, she decided not to share her news with the world until she had reached the three-month mark.

Although initially nervous, as the pregnancy progressed healthily, she began to relax a little more and focus on the idea of meeting her new arrival.

“I tried not to let the worry of history repeating itself take over,” she said. “I kept focused and lived day by day, trusting in my body that I would be able to handle whatever happened. 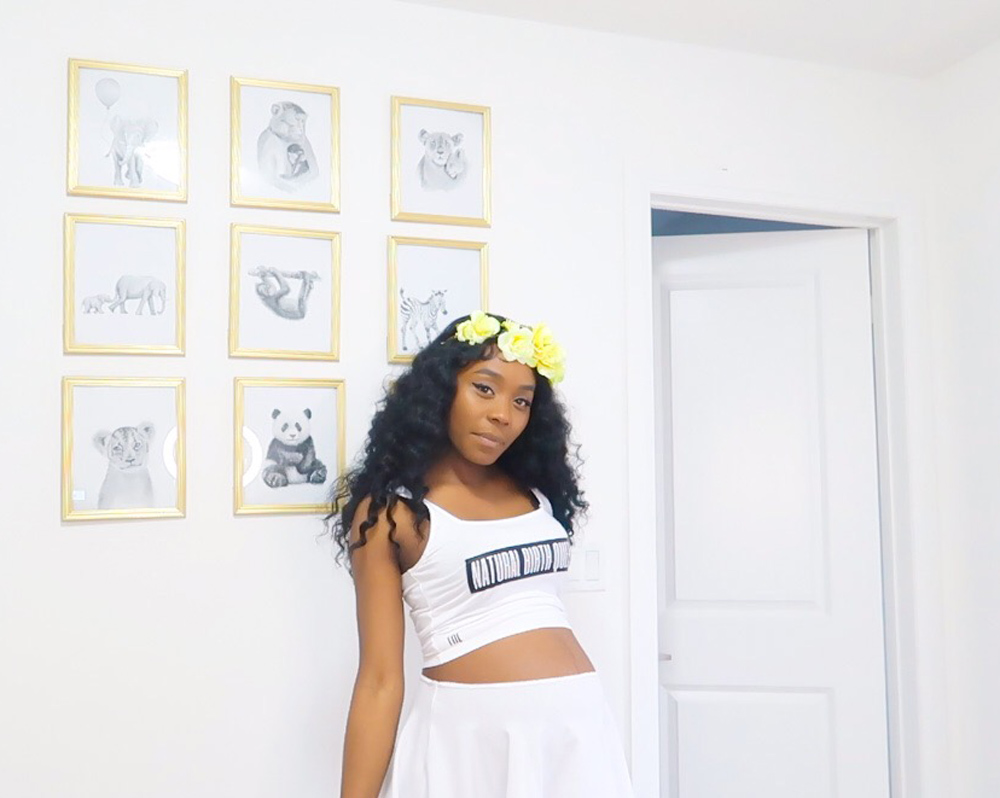 And on January 12 this year, Legaci went into labour with baby Hero, and prepared herself to film the birth.

“It was important to me to feel good about myself,” she explained. “I wanted to look back on the video and feel proud of myself.

“I also knew that, as we were filming for YouTube, I had to be aware of any nudity. I wore a skirt, so that I was covered up but still able to move and feel comfortable.”

Throughout the day, Legaci kept herself busy, dancing with Prince and Romeo and making herself kale smoothies to keep her energy up.

“Chazz was on hand to get me anything I needed and we’d set up lots of fun things to do to make sure I wasn’t focusing solely on the pain,” she said.

Then, as she entered the transitional phase – when the cervix is between seven and 10cm dilated and the body prepares to push – she positioned herself in her bath, ready to deliver her own baby.

After an eight-hour labour, she delivered Hero herself in just two pushes as Prince, Romeo and Chazz watched.

Legaci said: “The most beautiful part of the whole thing was having the kids there with me to witness life. 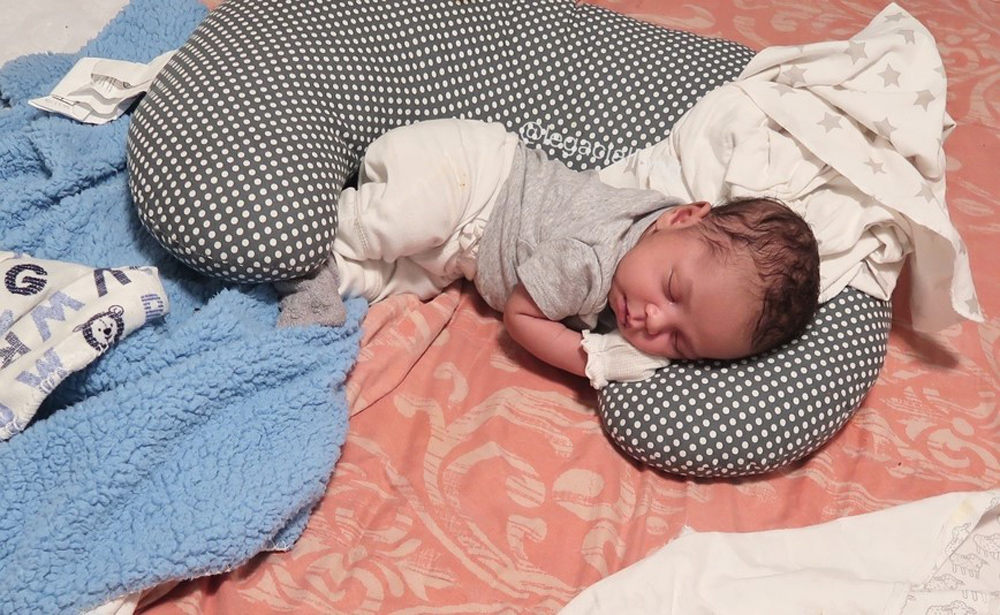 “I understand why some mums decide not to have their children there, but it was really important to me that they were.

“They’d come to every midwife appointment and deeply understood that I had a baby growing in my belly.

“I’ll never forget the look on Prince’s face when Hero arrived. His eyes were full of life and wonder. He still talks about it, saying, ‘Mum, remember when you gave birth?’

“I’m so pleased I’ve got to give him this memory of what a calm, positive birth looks like. I don’t want it to be this terrifying thing for the children. Hopefully, with what they have learnt from me, they can one day be there for their own partners if they have children.”

Now, Legaci is blissfully happy as a mum-of-three and all her boys are perfectly healthy.

As well as her YouTube channel, she continues sharing birthing tips through her Instagram and receives a flurry of messages every day off women from around the globe.

Some of the most popular pearls of wisdom she has shared include using the upright birthing technique – when a woman either stands, kneels or squats as she enters the second stage of labour, in order to let gravity assist with the delivery – and visualisation. 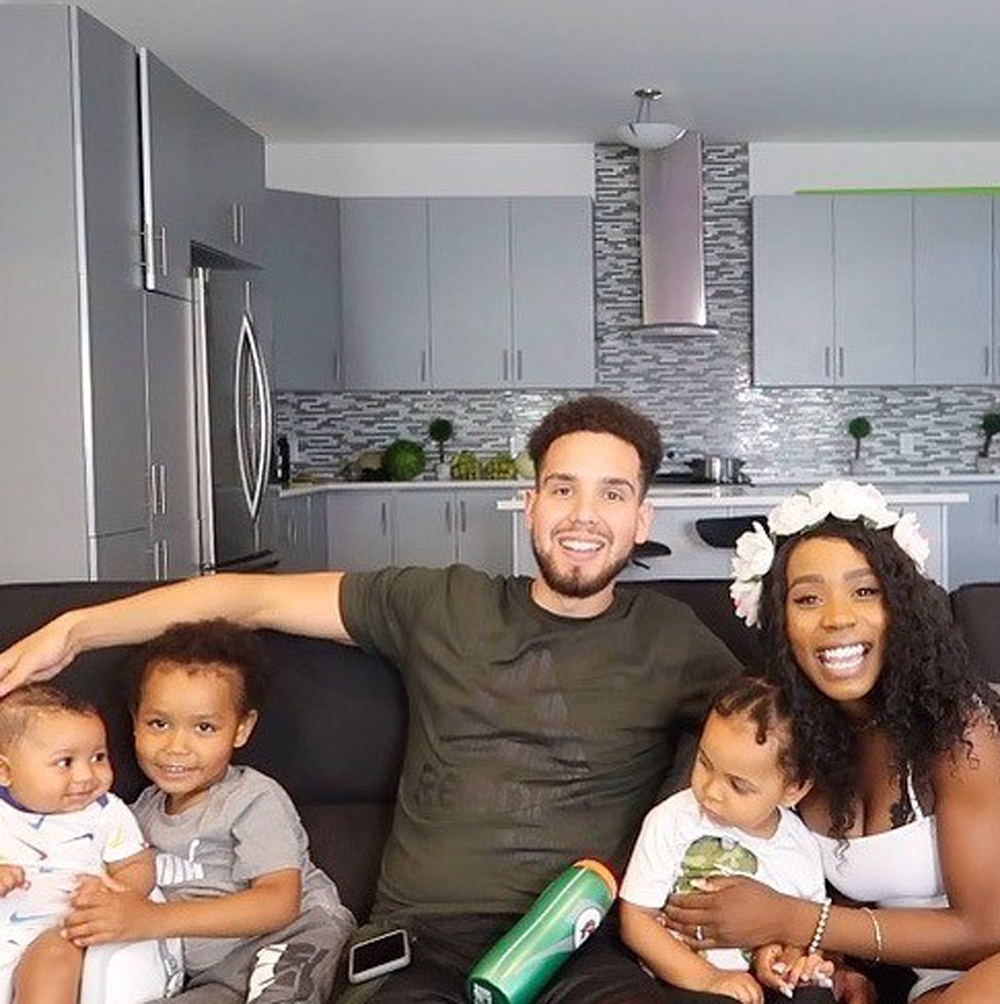 She explained: “Visualisation is where I close my eyes and picture my baby coming down my birth canal to meet me.

“I also teach women to reverse the psychology of pain. As soon as you think of a contraction as a negative thing, your body reacts accordingly. That’s why I get people to say out loud, ‘That feels good.’

“Even if it doesn’t at first, it will help change your mindset and, in turn, your body.”

Legaci also believes that being at home, surrounded by her own things, rather than in a clinical hospital setting, made for a more relaxing experience – although she appreciates that a home birth is not always an option.

By sharing her story, she hopes to inspire and inform women, giving them an honest, no-holds-barred look at labour, birth and beyond.

She concluded: “Thankfully I’ve never got any negativity for sharing my life on YouTube. I get lots of messages from women who say that my tips have helped them have the home birth they wanted.

“I know that unassisted, unmedicated births aren’t always possible – especially with high-risk pregnancies – but I also want to reassure women that they are powerful and capable.

“Not only are my videos there to help anybody that might need them, but they’re also for my boys to look back on when they’re older, and watch precious moments of their lives that they are too young to remember.”

In other parenting news, we revealed how one mum delivered her own baby on the bathroom floor after labour lasted just two minutes.

Plus a mum-of-11, 31, desperate to have at least four more kids… even though she already goes through 600 nappies A WEEK.

And a mum-of-three whose kids shared a ‘tiny’ room gives it a space-boosting makeover thanks to TRIPLE bunk beds.