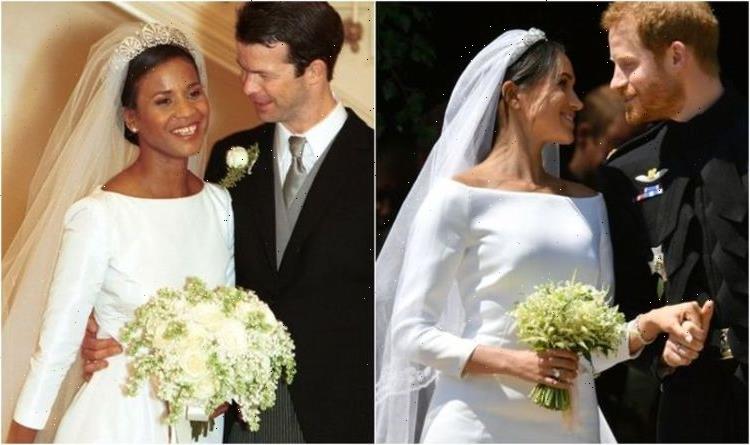 Meghan Markle gifted bracelet to Kate Middleton after fall out

When Meghan Markle married Prince Harry, she wore a Clare Waight Keller for Givenchy gown for the Windsor Castle ceremony. The wedding dress had royal fans drawing comparisons to Audrey Hepburn’s Givenchy looks from the 1950s. But Meghan Markle was not the first royal bride to wear a boat neck wedding gown.

Both dresses have bateau necklines and share the same clean, modern aesthetic.

While Meghan Markle’s neckline was a bit wider than Angela’s, both women kept their jewellery simple and accessorised with tiaras worn far back on their heads, flowing veils, and their hair pulled into low buns.

On Angela’s wedding day she wore an elegantly simple white dress designed by herself with a bateau neckline and long sleeves.

When the Duke and Duchess of Sussex were married in 2018, people spotted the similarities between Princess Angela’s and Meghan Markle’s wedding ensembles.

Many royal commentators have wondered if Meghan Markle drew inspiration from Princess Angela of Liechtenstein.

Angela’s husband is fifth in line to the throne of the German-speaking principality, located between Switzerland and Austria.

The Style Journals commented on Twitter, saying: “Duchess of Sussex’s wedding dress was most definitely inspired by Princess Angela of Liechtenstein.”

Known as Angela Gisela Brown before her wedding, Princess Angela was born in Panama in 1958 and eventually moved to New York where she met Prince Maximilian in 1997 at a party.

She was a fashion designer, who attended Parsons School of Design.

After graduating she worked as a successful stylist for three years and launched her own label A. Brown with investment partners in New York.

She was also Creative Director at Adrienne Vittadini, a small American label with a flagship in Beverly Hills at the time.

This allowed her to design her own dress for her wedding at the Church of St. Vincent Ferrer in New York’s Upper East Side.

The Princess married Maximiliano three years after the beginning of their relationship.

They reportedly met at a party in 1997, and the pair subsequently began dating.

They were married on January 29, and it was the first Liechtenstein royal wedding to take place in America.

Angela and Maximilian have one son, Prince Alfons of Liechtenstein, who was born in 2001.

Princess Angela was the first woman of African descent to ever marry into a reigning European Royal Family.

The family maintain a relatively private life but do occasionally partake in ceremonial events in their principality.