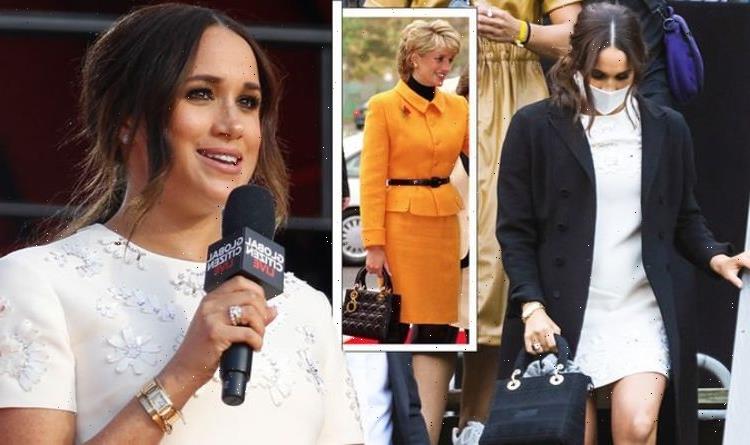 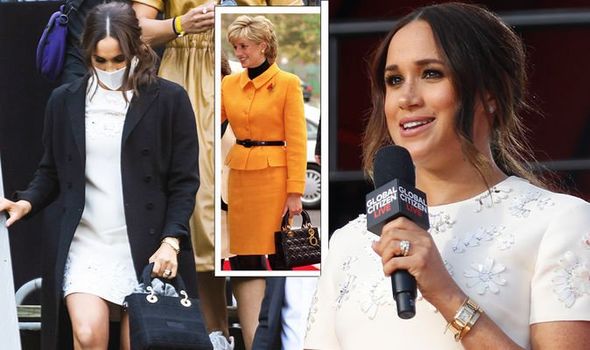 Meghan Markle, 40, and Prince Harry, 37, stepped out in New York City last weekend to attend Global Citizen Live: New York. The couple’s appearance was part of their visit to New York, which began on Thursday, and the Duchess of Sussex has been turning heads with her outfit choices. In her latest appearance, Meghan paid tribute to her late mother-in-law, Princes Diana, by the watch and bag she wore.

After a couple of days wearing cashmere coats and wool co-ords, Meghan opted for something a little more autumnal for her stint on stage.

The ‘San Gallo’ couture mini dress was by Valentino and is part of the designer’s new season collection.

The dress is crafted from virgin wool and silk and is embroidered with beats and floral accents across the chest, sleeves and hem.

As for the jewellery she wore, Galanterie de Cartier diamond studs were on her ears, Cartier’s ‘Love’ bracelet on her wrist as well as the ‘Snowflake’ ring by Birks on her fingers and finally, Princess Diana’s Cartier ‘Tank’ watch.

The Cartier Tank Française watch was worn by Diana at a number of occasions.

In 1997, Diana visited London’s Shri Swaminarayan Mandir Hindu Temple and was spotted with the Cartier watch on her wrist.

That same year, she attended an engagement at the British Lung Foundation and had chosen to complete her look with the watch.

The watch is said to have been gifted to Diana by her father on her 21st birthday.

Meghan has been gifted several items from Diana’s collection, including Diana’s butterfly earrings and gold bracelet which she wore on their Australian tour in 2018.

But the Cartier watch is believed to be a favourite as the former actress has “always coveted the Cartier French Tank watch”.

During a conversation with Hello Magazine back in 2015, the Duchess of Sussex explained: “When I found out Suits had been picked up for our third season—which, at the time, felt like such a milestone—I totally splurged and bought the two-tone version.

“I had it engraved on the back, ‘To M.M. From M.M.’ and I plan to give it to my daughter one day. That’s what makes pieces special, the connection you have to them.”

As for the other nod to Diana which Meghan made in NYC, when leaving the event, she wore a black mid-calf length coat and carried a small black bag.

The handbag was called Lady D-Lite and made by Christian Dior, retailing at £3,450.

Both the handbag and watch were a nod to her late mother-in-law.

Originally called ‘Chouchou’, the Lady Dior bag changed its name in 1996 in honour of Princess Diana after she was pictured using it.

The boxy bag was gifted to the Princess of Wales in September 1995 by the First Lady of France.

At the time, the Chouchou wasn’t available to buy and only in the possession of the world’s one percent.

Having worn it once, the bag became a staple for the royal and she went on to commission another in navy blue.