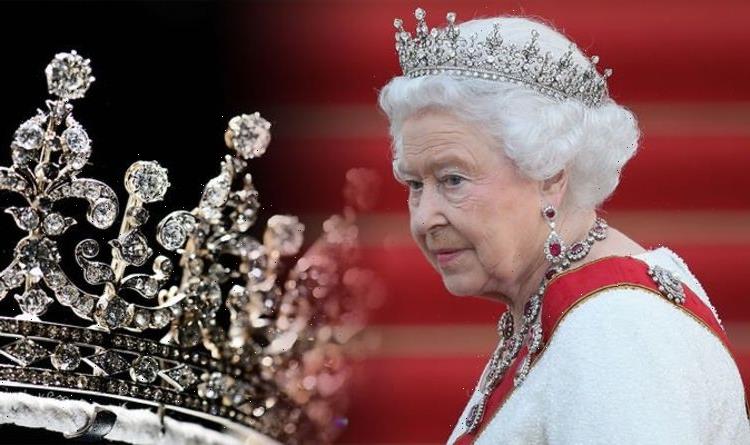 The Queen has access to a multi-million-pound collection of royal tiaras, many of which have been in the Royal Family for several generations. The Queen often wears tiaras for state visits and important royal engagements, and other royals get to wear tiaras at their weddings or at formal occasions.

Over her near 70-year reign, the Queen has worn several different tiaras on occasion.

But one tiara, which is thought to be the Queen’s favourite, is the Girls of Great Britain and Ireland Tiara.

Daena Borrowman, Marketing Manager at jewellerybox, told Express.co.uk the tiara has a sweet link to the Queen’s grandmother, Queen Mary.

Ms Borrowman said: “The Girls of Great Britain and Ireland Tiara takes its name from the committee that raised £5,000 for its purchase from Garrard’s as a wedding present for the then-Princess Mary of Teck and Prince George, Duke of York.

“A design of diamond festoons and scrolls was set on a detachable bandeau base of round and lozenge-shaped diamonds.

“It was originally topped with nine large pearls and could double up as a necklace or be used as a smaller coronet.

“Queen Mary famously had the pearl finials removed to be used in the creation of the Cambridge Lover’s Knot Tiara while the original tiara, replenished with diamonds to replace the pearls, was gifted to her granddaughter, the current Queen, for her wedding.”

The tiara was gifted to the future Queen Mary back in 1893, meaning it has now been part of the royal collection for more than a century.

Lady Eva Greville chaired a committee that raised the money for the glittering wedding present.

Mary didn’t wear the tiara for her actual wedding day, but it became one of her go-to tiaras as Queen.

Her granddaughter Queen Elizabeth II has followed in her grandmother’s tradition, often opting for the same tiara at formal events.

Queen Mary’s Girls of Great Britain and Ireland Tiara is perhaps most memorable for featuring in the Queen’s portrait on stamps and banknotes.

Nilesh Rakholia, Director at ABELINI Jewellery, told Express.co.uk: “Recognised as the Queen’s favourite tiara, most people will notice her wearing it on the £5, £10, £20 and £50 notes.

“Featuring beautiful festoon and fleur-de-lis designs, and set in silver and gold, the tiara was originally topped with pearls, however, it has since changed to 13 brilliant-cut diamonds – perfectly fitting for a Queen.”

As the Girls of Great Britain and Ireland Tiara has incredible sentimental value for the Royal Family, the Queen is likely to never part with the piece.

But if the Royal Family ever sold the tiara, it would likely fetch a staggering price at auction.

Mr Rakholia added: “A favourite of both Queen Mary of Teck and Queen Elizabeth II, it has a rich history of visiting some of the most prestigious events within the aristocracy.