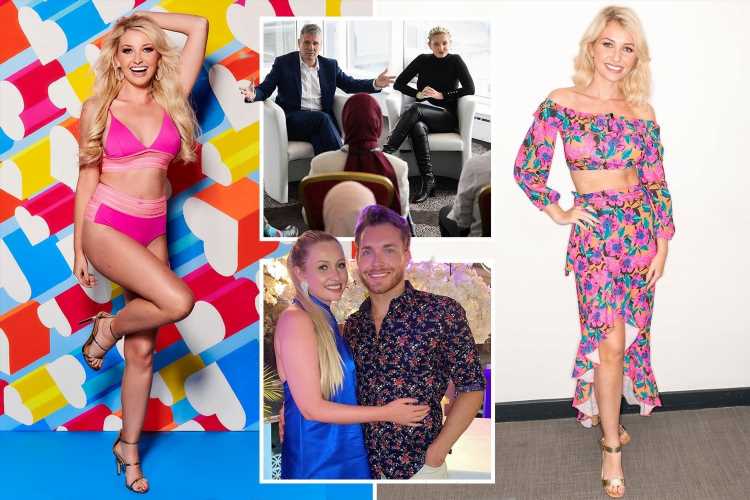 ANYONE tuning into BBC1 politics show Question Time tonight might be forgiven for doing a double take.

Sitting on the panel alongside MPs and heavy-weight commentators will be Love Islander Amy Hart — who is better known for having had her heart broken on the telly than for her views on Universal Credit. 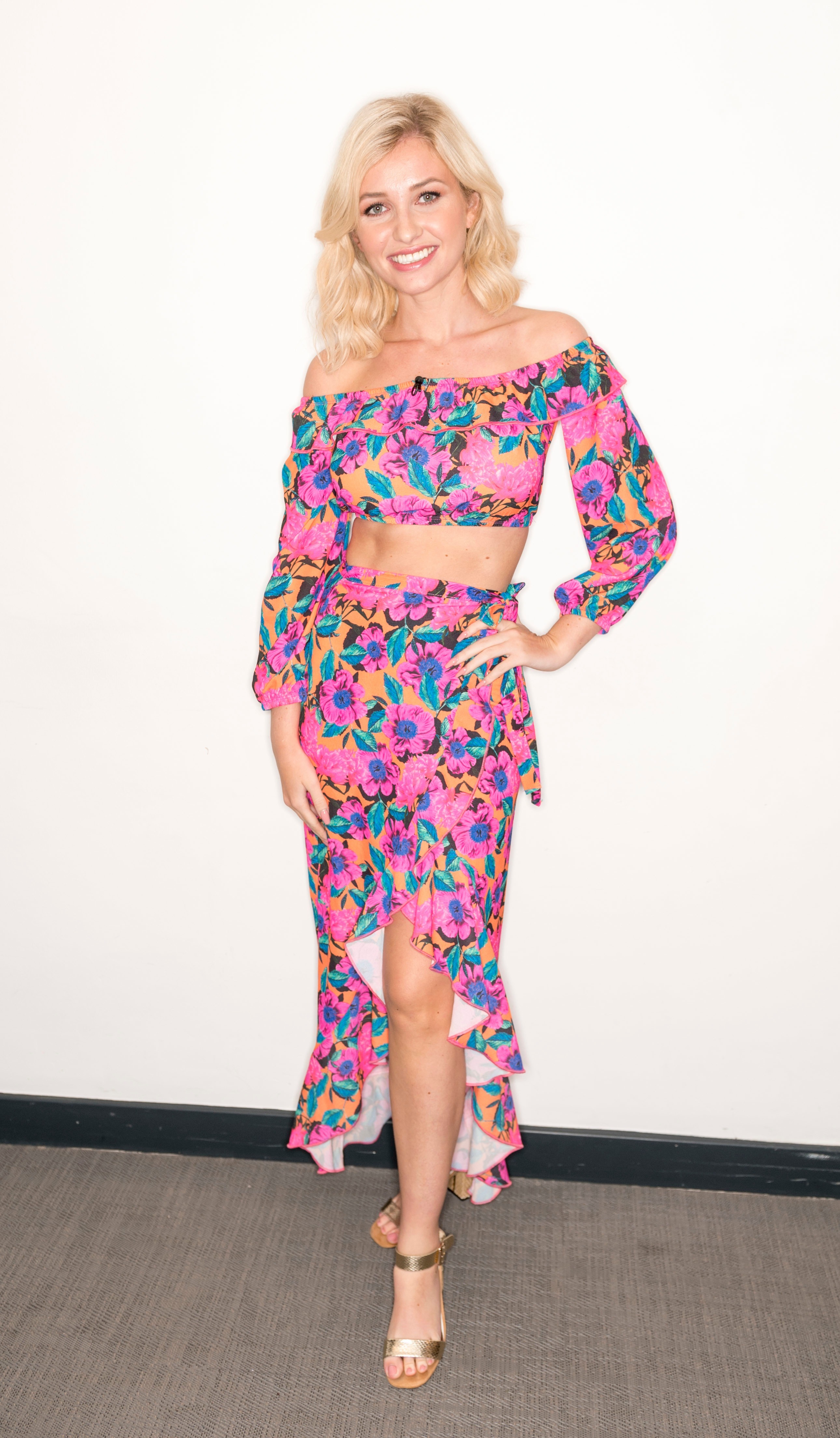 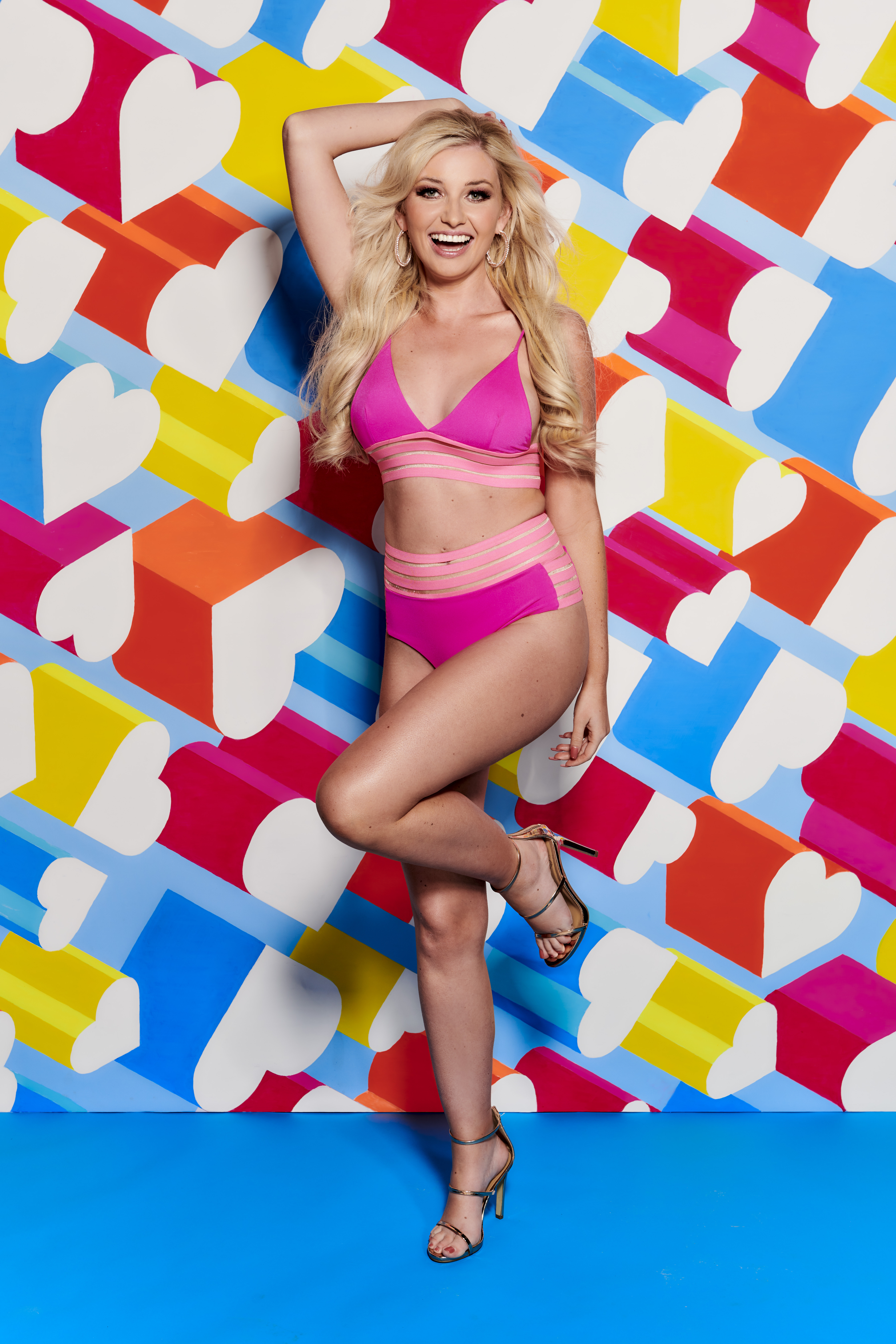 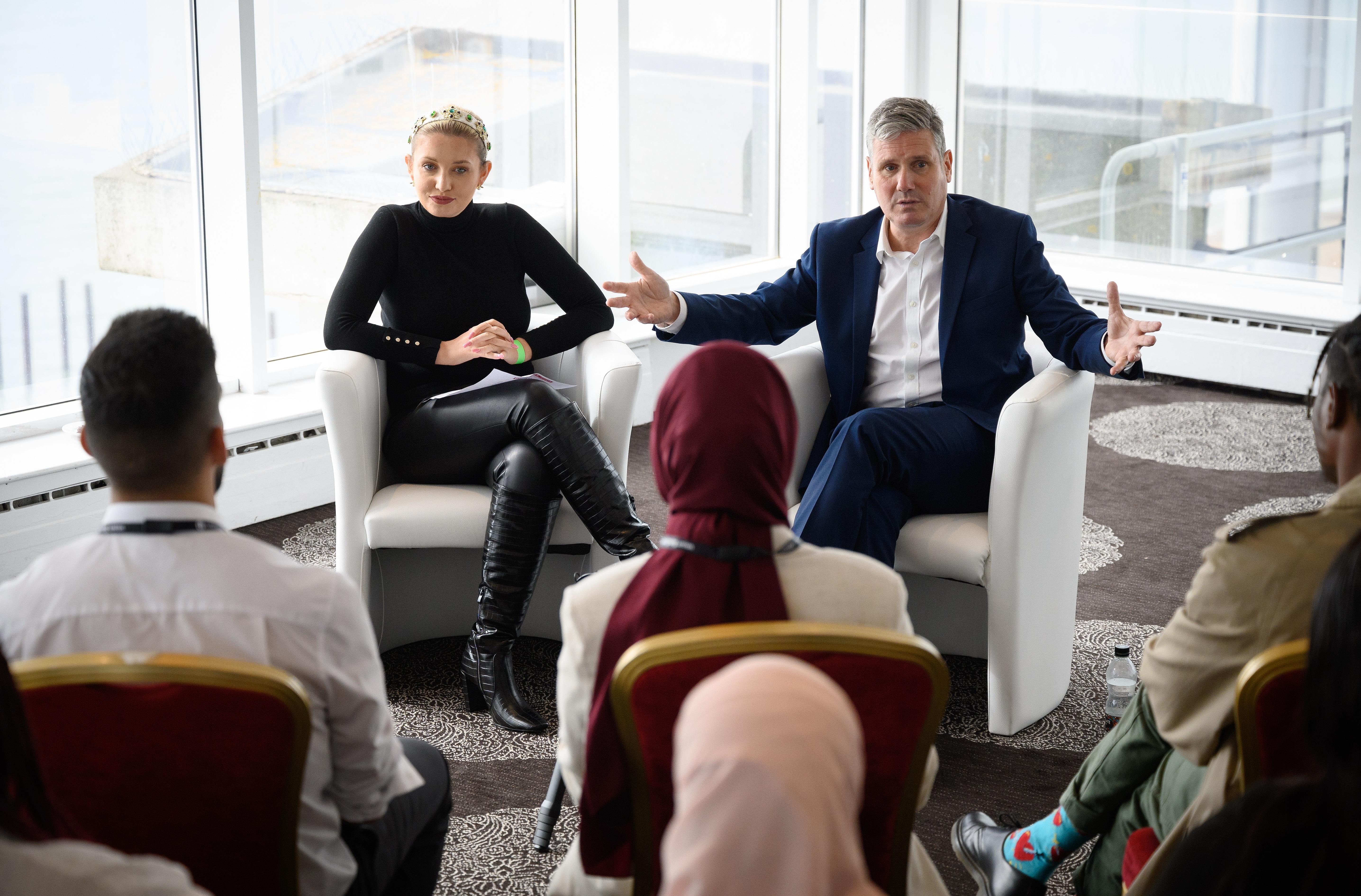 Indeed, the 29-year-old can scarcely believe it herself.

She says: “If someone had told me after Love Island that in two years’ time I was going to be on the Question Time panel, I would have thought they were joking.

“That wouldn’t have crossed my mind.

“But I’ve always liked proving people wrong and just because I was on a reality TV show doesn’t mean I don’t read the news or can’t have opinions.

“I just wish people would realise that we’re not all airheads.”

Inevitably, there have been Twitter grumbles about the BBC “dumbing down” and Amy’s invitation being a “gimmick”.

But she has a lot more political nous than social media snobs give her credit for.

An active member of the Labour Party since the age of 17, she has been at the party conference in Brighton this week and dedicatedly pounds the streets canvassing and handing out leaflets in the run-up to elections.

‘I JUST HOPE THEY'RE KIND TO ME’

On Saturday at the conference she even hosted a Q&A session together with Labour leader Keir Starmer.

Amy regularly tweets on subjects such as employment rights and her disdain for Prime Minister Boris Johnson. She also volunteers at her local food bank every Wednesday.

Earlier this month she put in an accomplished performance before the House of Commons’ Digital, Culture, Media and Sport Select Committee’s inquiry into influencer culture, giving evidence of her experience with internet trolling.

Nevertheless, Question Time, hosted by veteran newsreader Fiona Bruce, 57, is a different proposition altogether — and Amy is under no illusion about what lies ahead.

She says: “It’s really scary – I just hope they’re kind to me.

“I’m not a politician, but I’m going to go there, give it a go and really embrace the opportunity.

“And if I don’t know enough about something, I will hold my hands up and say so.

“As long as I’m honest then I think I’ll be fine.”

I’ve always liked proving people wrong and just because I was on a reality TV show doesn’t mean I don’t read the news.

Preparation is key and Amy has spent this week reading the news-papers, as well as speaking to political contacts, to make sure she is up to date with all the key issues.

She says: “Like with Afghanistan, for instance, I was very young when it all started in 2001 so I’ve been doing a lot of reading. I’m learning all the time and I just want to make a difference, because I see all these horrible things that are happening.”

Amy’s interest in politics began as a young girl when her grandfather was a Lib Dem county councillor and would take her out on the campaign trail knocking on people’s doors.

When she was nine, she declared to her Year 5 teacher at school that she wanted to “be in Parliament and make a difference” — and she later considered studying politics at university.

Instead, she took a cabin crew job with British Air-ways and became heavily involved with the union.

She says her affinity with the Labour Party was born out of a sense of fairness, a belief that “everyone deserves the same chances in life” and a desire “to help those who have faced adversity”.

Amy speaks with passion and genuine concern but has still faced a backlash and receives “horrible messages” when-ever she dares voice a political opinion.

When she announced that she was to host the Labour party conference panel with Mr Starmer, it prompted some angry responses.

She says: “Some people were saying, ‘Oh, Keir can’t be bothered to do X, Y or Z, but wants to talk to a lowly reality TV has-been’.

“And then there were people trying to discredit me saying, ‘What’s she going to ask him about? His favourite sauce to have on his chips?’

“And I’m like, you honestly don’t know anything about me.”

In fact, the discussion covered a range of topics including trans-gender rights, youth unemploy-ment and climate change.

“What a genuine, lovely guy,” she says. “He’s relatable and he speaks from the heart and I honestly think he would make our country a better place.

“I see him as a sort of Tony Blair-style figure, much less divisive [than Jeremy Corbyn] and someone who can win the middle ground.”

She hopes to encourage more young people to engage with politics, but agrees it has an image problem to overcome.

‘HE'S SO LOVELY AND AMAZING’

She says: “A lot of young people are turned off by politics because they think it’s all privately educated men in suits.

“Which a lot of it is. But to quote one of my favourite musicals, Made In Dagenham, ‘nothing changes if it isn’t challenged’.

“People think it’s all so far removed, but our whole lives are affected by politics.

“For women, it can be off-putting because it’s a very male-dominated environment, but there are lots of female MPs I find really inspirational.

“Anneliese Dodds and Alex Davies-Jones are both amazing.

“I love Tracy Brabin as well and my all-time favourite is Carolyn Harris, who I’m obsessed with — I’m going to have lunch with her and hope that we’ll become best friends.”

Tonight, Amy will be drawing on some of the confidence she gained from her select committee appearance.

It was not until she was waiting to go in front of the committee that the magnitude of the occasion dawned on her — and she worried about not having taken up the earlier offer of training for giving evidence.

She says: “It suddenly felt quite daunting. But I reminded myself I was going in there to talk about my experiences.

“And they were all really nice and encouraging.

A lot of young people are turned off by politics because they think it’s all privately educated men in suits.

“In the end, I was there for two hours when I was only supposed to be there for one.”

Tighter regulation of social media platforms to prevent online abuse is one of the issues Amy feels most strongly about.

She would like to see an end to anonymous accounts and suggests that all users should have to register with their national insurance number.

Anyone under the age of 16 and without a national insurance number would use their parent’s or guardian’s number.

She says: “I’ve heard people say, ‘Ah, you know what you’ve signed up for . . . ’ But that’s funny because nowhere in my Love Island or Celebs Go Dating contracts or any of my brand contracts does it say I should be subjected to online abuse on a daily basis.

“People say, ‘It’s just my opinion.’ Well, tell your WhatsApp group your opinion. Take some responsibility for yourself and don’t project your horribleness on to someone else.”

Away from politics, Amy is in her first serious relationship, with model and entrepreneur Sam Rason, 33.

The news will please anyone who followed her public heart-break on Love Island 2019 as Curtis Pritchard, 25, dumped her for a short-lived romance with Maura Higgins, 30.

Amy met Sam when he messaged her on Instagram and they have just returned from their first holiday together.

As she has said on her Instagram post when they went official last month: “Good things come to those who wait.”

She adds: “It’s been a complete whirlwind. He’s so lovely and amazing, and we’re so happy.”

And she squirms when asked if she could ever date a Tory.

She says: “I don’t know. Hope-fully, I’ll never have to now. Sam votes Green, which I can deal with, although I’ve tried to sway him into voting Labour.”

Does a career in politics now beckon? Amy replies: “At the moment I’m happy on the sidelines and being a voice for the causes I believe in, but maybe in ten years’ time. Culture Secretary would be my bag.

“In the meantime, I just want to use my platform for something worthwhile, or what’s the point?” 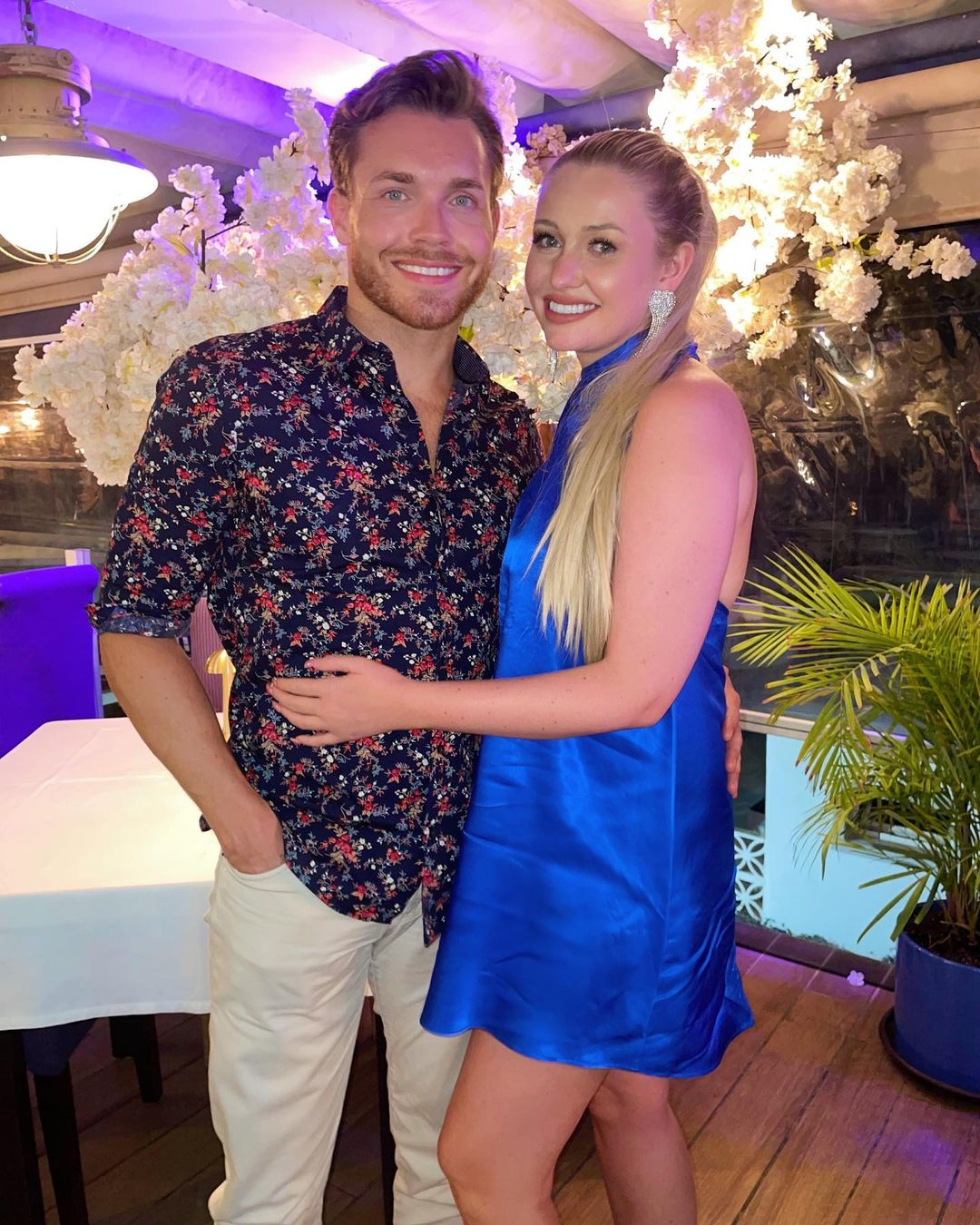 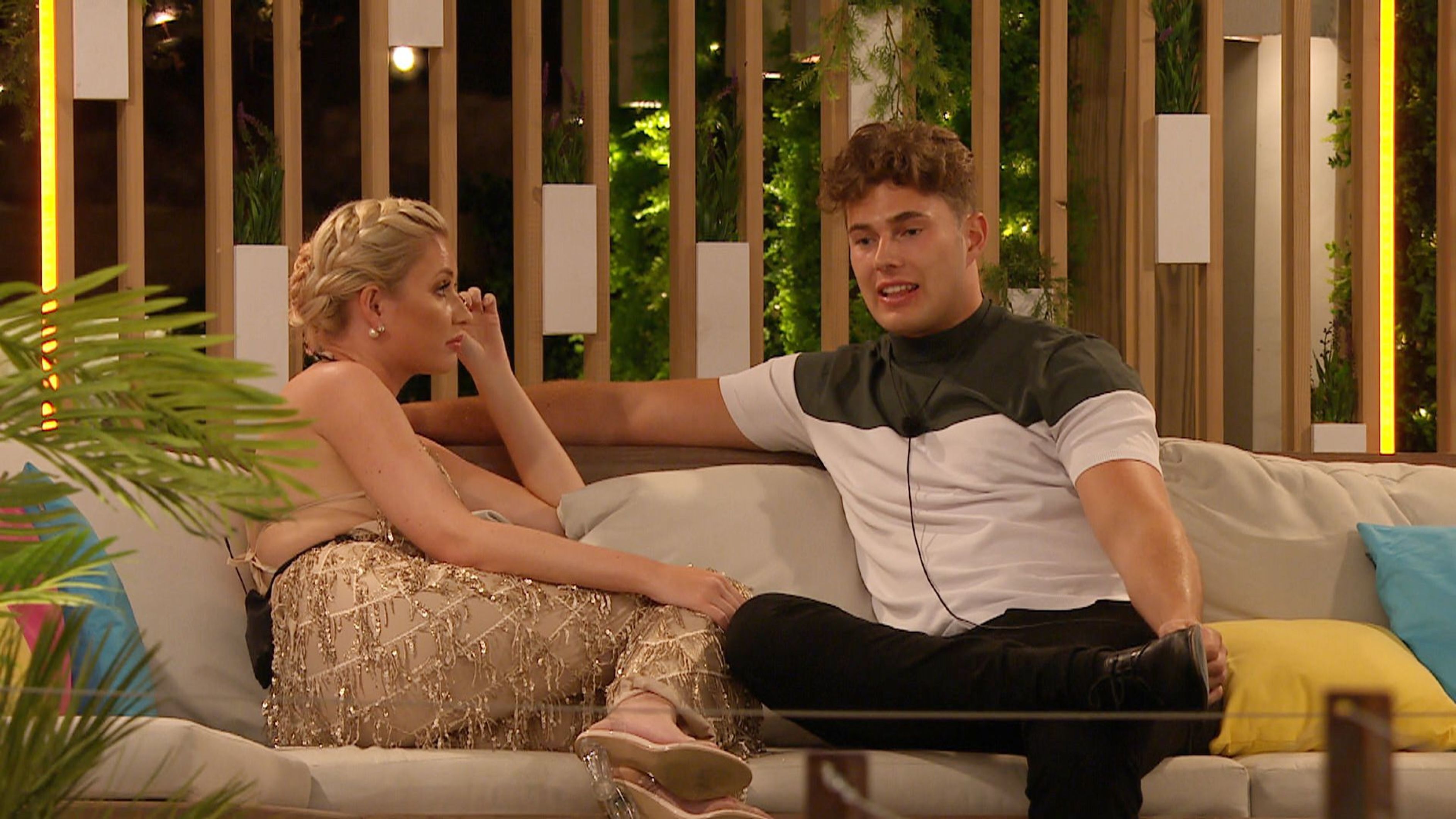