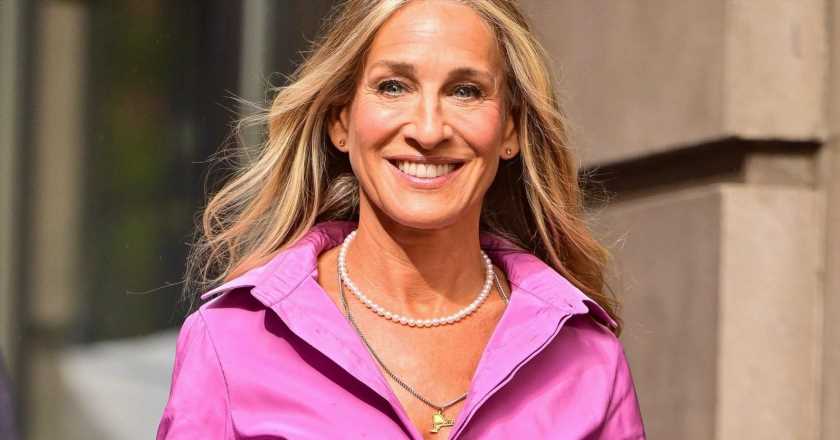 To get fans in the mood for the Sex And The City reboot, here are the biggest outfit moments from the And Just Like That… filming so far.

Ever since the Sex And The City reboot was announced last year, fans have been very excited. Filming for And Just Like That… finally started in New York a few weeks ago, with Sarah Jessica Parker marking the occasion with the first reunion photo of the cast in over 20 years.

Many fans were disheartened to see that Kim Cattrall wasn’t in the photo with Parker, Kristin Davis and Cynthia Nixon, as she isn’t taking part in the new series. But, as anyone who binges SATC on an annual basis will know, some of the biggest and most recognisable characters aren’t even people…

SATC just wouldn’t be the same without the hustle and bustle of New York City, the razor sharp witty one-liners, and, of course, the outfits. Ah yes, from Carrie’s iconic tutu in the opening credits to Samantha’s bright power suits and Miranda’s bucket hat and hoodie –  Patricia Field rose to fame as the show’s costume designer and stylist.

Alas, Field hasn’t returned to work on the revival, as she is currently working on location in Paris for Emily In Paris. Speaking to Women’s Wear Daily, she explained that her “very dear friend” Molly Rogers, who used to work with her, will be dressing the cast.

As filming continues to take place across New York City, fans have been able to see the outfits on parade. Over the weekend, Parker was spotted wearing the purple Fendi bag (or ‘baguette’) that famously got stolen from Carrie in season three. This means that we’ll probably be seeing a lot of nods towards that characters’ former fashion moments.

Let’s take a look at the biggest outfits that have happened in the reboot so far.