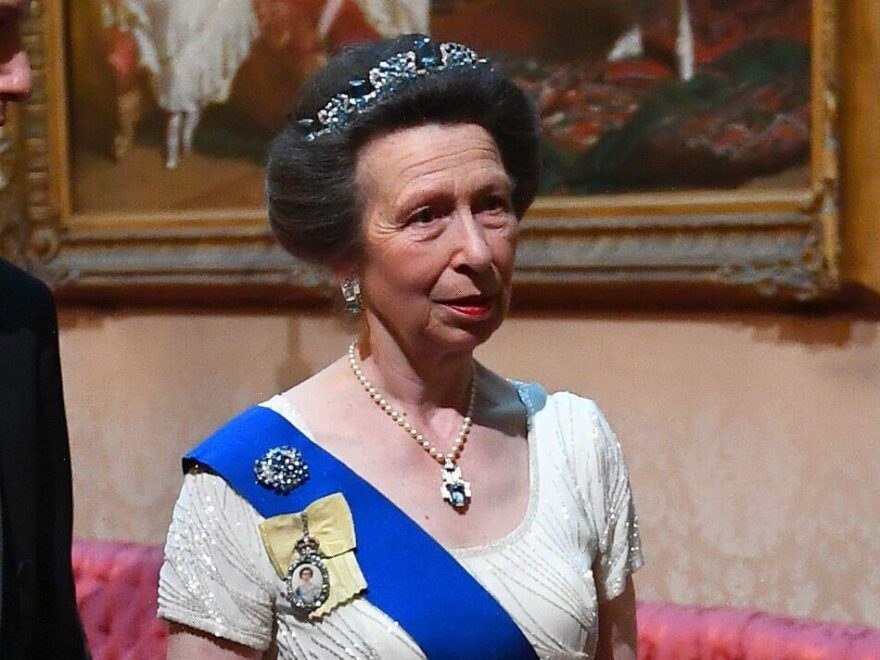 Princess Anne is known as Britain’s no-nonsense royal, but she is known to turn up the glamour for state occasions. Anne owns several stunning tiaras, but her most striking is arguably the Aquamarine Pineflower Tiara.

The Aquamarine Pineflower Tiara previously belonged to the Queen Mother, and she was thought to have received it as an anniversary gift from her husband King George VI.

According to the Court Jeweller, the incorporation of pineflower motifs is an “odd choice” for a royal diadem, but there could be symbolism behind them.

The website explains: “The pinecone (or ‘pineflower,’ as it’s generally called) design seems like an odd choice for a tiara, but I think the inclusion of a tree-related symbol in a wedding anniversary tiara does make some sense.

“Elizabeth was the strong, unwavering force behind her husband, helping to encourage and steady him during the wild upheaval of the abdication and accession.”

The Queen Mother was pictured wearing the diadem on occasion, but she later gifted it to Anne to mark her wedding to Captain Mark Phillips in 1973.

The Aquamarine Pineflower Tiara looks a little different to how it did when the Queen Mother wore it, which suggests Anne had it altered to suit her tastes.

While a pineflower motif originally took centre stage, this has since been replaced with a rectangular aquamarine stone on a shorter design.

It is thought the original centrepiece can now be worn as a pendant or a brooch.

Anne has worn the diadem to state banquets over the years and formal evening engagements, but she also has several other grand tiaras in her collection.

Anne was gifted the Festoon Tiara in the 1970s by a company after she christened one of their ships and it was worn by her daughter-in-law Autumn Phillips when she married Peter Phillips in 2008.

When she was younger, Anne would often wear the Cartier Halo Tiara which was part of the late Queen’s collection.

The tiara belonged to Anne’s paternal grandmother Princess Alice of Battenberg, and it was worn by Anne’s daughter Zara Tindall to her 2011 wedding to Mike Tindall.

Alexandra Michell, Gemologist at Prestige Pawnbrokers Hatton Garden, previously said: “There is no surprise that the bandeau is of a meander design (Greek key) and has a centre laurel and honeysuckle decoration either side.

“It is studded with diamonds set in a white precious metal more likely to be platinum because of the era it was made. It is perceived to be made by Cartier in France.

“It is not known how much the tiara is worth, but I estimate it to be worth over £1million and if it is a Cartier piece, it could be as much as £2million to £4million.”

For her first wedding in 1973, Anne wore a particularly sentimental tiara from the royal collection.

Queen Mary’s Fringe Tiara is a spiked diamond diadem which belonged to its namesake, the Queen’s paternal grandmother.

The late Queen Elizabeth II wore it on her wedding day in 1947 at Westminster Abbey.

Her only daughter Anne followed suit, as did the Queen’s granddaughter Princess Beatrice in 2020.