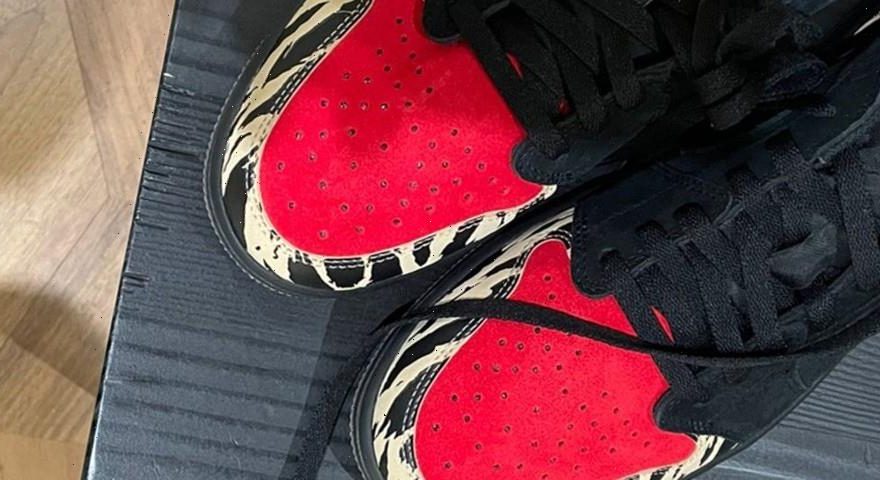 Travis Scott recently took to his Instagram Stories to reveal a new Air Jordan 1 Low with a vibrant color scheme and striking mudguard pattern — and now a source with ties to Jordan Brand has revealed that the style is a Solefly collaboration. This same source also indicated to HYPEBEAST that Solefly’s low-cut Air Jordan 1 is inspired in equal parts by Nike‘s cult-favorite Air Carnivore from 1993 and Nike SB‘s SB Dunk Low “Bison.”

Scott may not be a world-beating photographer, but the cut-off image he posted does reveal some of the shoe’s key details. Its toeboxes are dressed in the exact same red suede shade as the “Bison,” and the jagged black and white tiger camo pattern on the mudguard is all ’90s Nike Sportswear. The midfoot looks to be crafted of black suede and the tongues of black nylon, while midsoles and outsoles take on a black/gray mix and a final pop of red makes its presence felt around the tongue.

At the time of writing, no release details or pricing information has been revealed. However, Air Jordan 1 fans will be keeping a keen eye on this release: back in 2018, the Solefly x Air Jordan 1 “Art Basel Miami” was one of the year’s biggest Air Jordan collaborations, garnering such an enthusiastic response from Miami’s sneaker community that Solefly’s in-store release of the sneaker was shut down by the police.

Elsewhere in the world of Jordan Brand, be sure to take a look at the Air Jordan 1 Low in “White/Eclipse Bronze.”
Source: Read Full Article