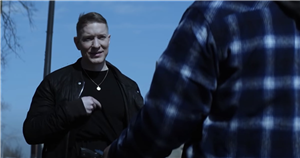 It’s a new city, new rules, but the same ole ruthless Tommy in Power Book IV: Force. The newest spinoff from the Power Universe — following Ghost and Raising Kanan — sets Joseph Sikora’s fan-favorite character Tommy Egan — aka the “crazy white boy” — in his own series that follows him back to his hometown, Chicago. The show picks up right after Tommy cuts ties in New York and tries to put his old life behind him — in the rearview mirror of his blue Mustang, of course.

We last saw Tommy in the season one finale of Power Book II: Ghost, where he faked his own death to clear him of the murder charge Tasha put on him for Ghost’s (Omari Hardwick) death. In the newest trailer for Power Book IV: Force, which Starz released on Jan. 10, free agent Tommy makes some new friends and a couple new enemies as he shakes things up in the city’s drug game. “New York is over. This my chance,” Tommy says in the clip.