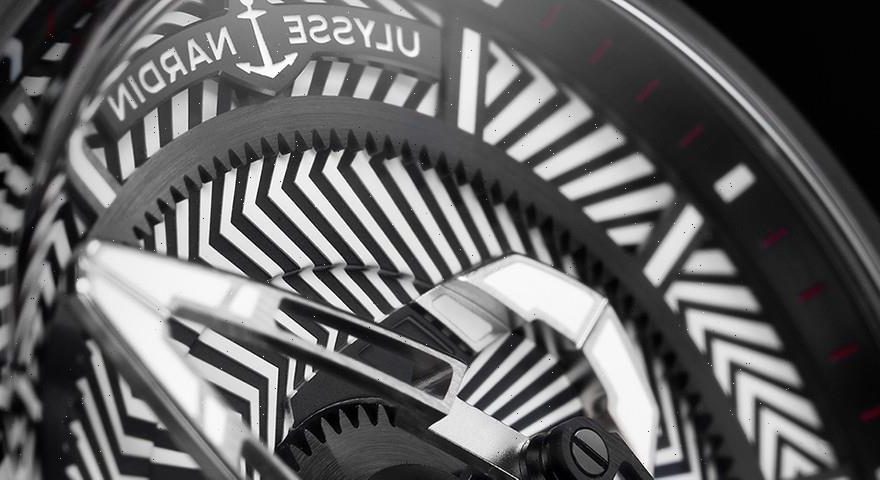 Ulysse Nardin‘s Freak X has been treated to a new skin based on one of the most unusual forms of military camouflage ever developed, Razzle Dazzle.

At first glance, the angular, geometric forms and high contrast color scheme of Razzle Dazzle might not seem like the best way to go unnoticed, until you learn that it was developed for naval combat in the First World War and designed to make it difficult for enemy ships to estimate your vessel’s range, speed and heading.

Outside of the military the pattern is more eye-catching than disorientating and it suits the already larger-than-life Freak X, Ulysse Nardin’s horologically scaled back, more accessible version of its Freak hyperwatch.

While the Freak features much of its mechanics on the rotating carousel that also serves as its minute hand, the Freak X is built around Ulysse Nardin’s UN230 movement, a hybrid of the company’s UN-118 stock automatic and Freak Vision UN-250 movements, with just its silicone balance wheel exposed.

Here, a decorative movement plate beneath the carousel has been given a Razzle Dazzle treatment, using a combination of lacquer, electroplating/galvanic treatment and laser engraving. The watch follows a big Watches and Wonders showing for Ulysse Nardin with the brand dropping its Blast Hourstriker and the crossover Diver X Skeleton.

Housed in a black DLC-treated 43mm titanium case, the Freak X Razzle Dazzle is being offered on either black or white rubber-backed leather straps in a limited edition run of 30 pieces, priced $27,300 USD via Ulysse Nardin authorised dealers.