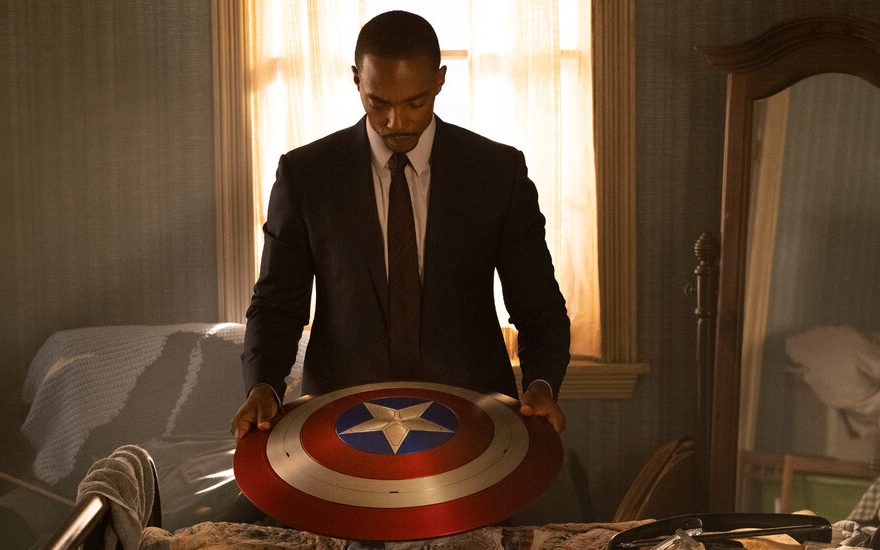 ‘The Falcon and the Winter Soldier’ Season 1, Episode 1

Although the title of the latest Marvel Comics television series is “The Falcon and the Winter Solder,” the show is defined by another superhero entirely: the absent Captain America. Both the high-flying military operative Sam Wilson (Anthony Mackie) and the brainwashed, ageless assassin Bucky Barnes (Sebastian Stan) spent time as sidekicks to the original Captain, Steve Rogers, who at the end of the 2019 Marvel movie “Avengers: Endgame” retired from the hero business, leaving his old friends without a partner — or a mission. The question haunting Sam and Bucky now is, “What’s next?”

That’s also a good question for the bosses at the streaming service Disney+, who are coming off the recent success of “WandaVision,” their first big post-“Endgame” Marvel TV project. The highly assured, often thrilling first episode of “The Falcon and the Winter Soldier” is different from “WandaVision” — in that it’s an international action-adventure and not a surreal riff on classic sitcoms. But Episode 1 is likely to satisfy Marvel fans who’ve invested years in keeping track of these characters and their many, many problems.

Directed by Kari Skogland and written by the show’s creator Malcolm Spellman, this first episode opens with a rousing aerial chase sequence, reminiscent of some of the better set pieces in Disney+’s “The Mandalorian.” The Falcon and his U.S. Army handler Lt. Torres (Danny Ramirez) pursue enemy agents through the hills, deserts and canyons of North Africa, trying to nab their target before they fly into Libyan airspace and touch off an international incident.

Skogland and Spellman provide minimal setup to what’s going on, beyond loosely identifying the bad guys: a band of criminals known as “the L.A.F.,” who’ve kidnapped an Army officer. Most of this show’s first 10 minutes is pure visceral excitement, as we watching Sam in his high-tech flying outfit, dodging bullets and blades, attacking dudes in jumbo jets and helicopters and diving after them when they bail out in glider suits. It is super-heroics at their niftiest, culminating in a daring midair rescue.

Sam then gets another moment of triumph before he returns to his post-Captain America existential crisis. While sitting in a Tunisian cafe, Sam talks (in perfect Arabic) to a stranger who thanks him for helping to restore reality, after “the blip” that sent half of the sentient creatures in the universe into limbo for five long years. Like “WandaVision,” “The Falcon and the Winter Soldier” isn’t just set in a world still recovering from the trauma depicted in “Avengers: Infinity War” and “Endgame.” It’s also directly about how both the superpowered and the ordinary have been coping with all the loss and the confusion.

A big case in point for Sam: After his covert mission in Africa ends, he returns to his family home in Louisiana, where his sister Sarah (Adepero Oduye) has been struggling to turn their parents’ beat-up old fishing boat into a viable business. Sam hopes that his fame and prestige as an Avenger will help swing them a bank loan. But like billions of other people who disappeared in the blip, he hasn’t earned any income for five years, which — perhaps coupled with some old-fashioned institutional racism — means the Wilson siblings don’t get help.

Bucky has even bigger troubles. He spent a half-century as a mind-controlled killer, before finally regaining consciousness not long before being blipped away. Since returning, he’s been trying to make amends for the harm he caused, hoping to push back some of the nightmarish memories that torment him at night. But he’s finding that even being kind can be complicated.

Bucky doesn’t see as much action this week as Sam does. He’s at the center of one big fight sequence, in a flashback to an old mission from his international assassin days. Instead, most of his story line involves him going on his first date in about 80 years, at the urging of an elderly Asian-American neighbor. The twist? Bucky murdered that neighbor’s son, after the kid witnessed the hit depicted in the flashback. 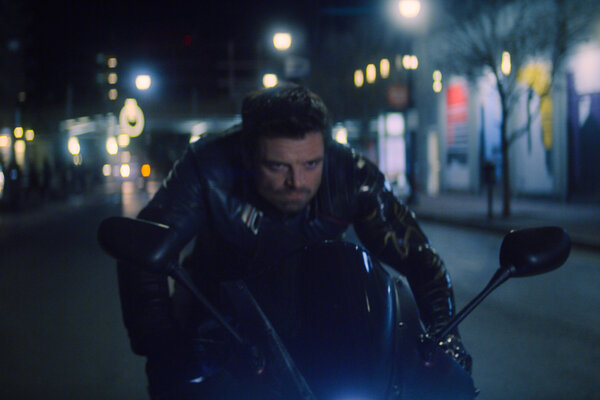 Much of this episode is about the sense of disconnection and alienation these two title heroes feel — not just because they were absent from Earth for a half-decade, but because they have weird jobs. Bucky, who fought in World War II before he was captured by the enemy and turned into a monster, ruefully notes at one point that he probably hasn’t danced with a girl “since 1943.” Sam is a wizard with the advanced Stark technology he works with every day, but he fumbles when it comes to getting his family’s boat motor cranking. When Bucky’s therapist tries to ease his troubled mind by reminding him, “You’re free,” he mutters, “To do what?”

By the end of this initial 45-minute chapter, the series’s plot begins to kick in, on two fronts. Early in the episode, Torres tells Sam he’s on the trail of an underground revolutionary group called “the Flag Smashers,” who think life was better during the blip years. Torres locates their leader in Switzerland — sporting a creepy mask with a red handprint across the face — and gets beaten brutally for his troubles. Meanwhile, Sam — who was offered the job of Captain America at the end of “Endgame” by Steve Rogers himself — is rudely surprised when the shield he donated to the Smithsonian is retrieved by the U.S. government and handed to a new guy.

We’ll surely learn more about this new Cap (played by Wyatt Russell) next week, seeing whether he lives up to the idealistic comment Sam makes when he donates the shield: “Symbols are nothing without the men and women who give them meaning.” Clearly, in between the white-knuckle action sequences, “The Falcon and the Winter Soldier” is going to leave space for some thoughtful rumination on what the American dream means in a world where, as Sam also says, “Every time things get better for one group, they get worse for another.”

For now though, he appears to be a living embodiment of that trade-off. When he opted out of becoming Captain America himself, Sam may have thought he could control the legacy of his old friend, by letting his iconography pass into history. Instead he’s finding that whatever he doesn’t take, someone else will — and maybe at his own expense.

Fans of the Marvel Cinematic Universe surely perked up when Don Cheadle appeared as James “Rhodey” Rhodes, counseling Sam at the Smithsonian. But this episode also featured a more deep-cut M.C.U. character in the kickboxing mercenary Georges “the Leaper” Batroc (Georges St-Pierre), who appeared as the main villain in the opening action sequence of “Captain America: The Winter Soldier” and serves a similar function here, as the man behind the kidnapping the Falcon foils.

Speaking of parallels to “The Winter Soldier,” in that movie Captain America nonchalantly jumps out of the back of a plane, and the Falcon does the same thing at the start of this episode … but with a little more flair.