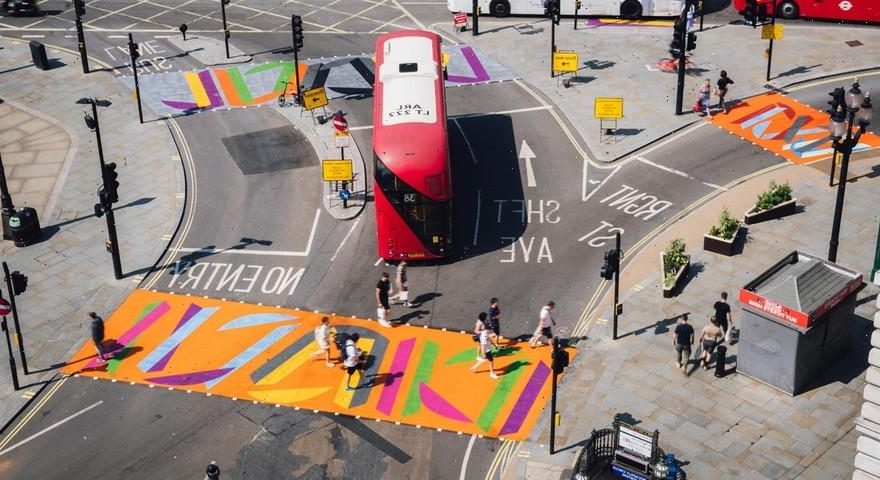 The Royal Academy of Art has partnered with a new cultural organization, called Art of London, to breathe life back into London’s city center. “The Piccadilly Art Takeover” is the largest public art initiative the city has ever seen and is supported by a number of groups, such as the Heart of London Business Alliance (HOLBA), Sky Arts, Piccadilly Lights, Westminster City Council, along with Sadiq Khan, the mayor of London.

After a bleak and desolate lockdown, Londoners can enjoy the summer months with a splash of color from artists Michael Armitage, Vanessa Jackson, Isaac Julien, Farshid Moussavi and Yinka Shonibare. Walk the streets to find 13 vibrantly painted crossings — the most art crossings ever in one place in the UK — accompanied by 30 equally eye-catching flags, filmed pieces for the 780 sqm Piccadilly Lights and a special augmented reality experience that audiences can tap into via their mobile phones.

Speaking on the inspiration behind his work, Armitage stated, “Three of my images have been used for flags that will hang over Piccadilly. One is made from a painting honouring the work of key workers in London. It’s a painting of four of the refuse collectors in Hackney, near my studio, who worked throughout the pandemic, putting themselves at risk as a result. It’s an honour to be able to celebrate the people of London, as we welcome people back to the iconic area of Piccadilly.”

The Piccadilly Art Takeover runs from July 21 to August 31.

Elsewhere in art, own a piece of Olympic history in a special figurine collection by WAGTI.
Source: Read Full Article